I’ve made a few mistakes in the last few days.  The first one was having grown tired of having my new house full of rubbish that can’t be disposed of, I decided to put some art up on the walls to make some space.

As I suspected, it turns out that 200 year old walls are more solid than you’d think. Several nails and drills later I was left with a crater in the wall.  Not being able to go out, I ordered in some filler which due to the virus took a day or two too arrive and by that time I had kind of grown used to it.

I found some white paint and painted over the repairs.  Then I went down the stairs and painted over scratches and marks caused by the inevitable damage of moving in and having builders bashing the place up again.

I’ve attached some paintings to the wall using some sort of velcro type attachments.   You’re meant to stick them together and then attach them to the back of the painting and then push the painting against the wall for 30 seconds, remove the painting and half of the velcro will remain on the wall where you press at it again for a while before leaving it an hour and finally putting the art back on the wall.

Typically after 30 seconds mine were stuck so firmly to the wall that there was no way to be removed so they are stuck there holding up paintings with 30 seconds of effort rather than an hour.  I half expected to hear a crash or two in the night but so far they are still there.  No doubt they will fall off in a few days when I have something breakable underneath them.

Another mistake I made was catching a bit of the daily press briefing from Downing Street on the television and on two other days catching follow-ups on the radio.  Everyone I’ve ever had personal dealings with on email, over garden fences or whatever seems to have had no problems whatsoever.  The journalists and reporters though have been horrendous asking seemingly obfuscating questions about confusions about people going out or not going out.  I’ve noticed for weeks a trend for the media either trying to clarify the very clear and once that is done, move towards going back to normal just days after asking why are we still acting normally.  Very similar to how the media behaved before during and after the Brexit vote and indeed the last general election with all 3 instances just a little piety shown in the immediate days of both votes and the lockdown beginning and braindead point-scoring before and after.

It’s such a damage to democracy, a waste of time and to be fair not a great way to either obtain information for the public or put pressure on a government.  All in the name of selling us products or trying to have agendas or make stars of themselves.  It’s really very simple isn’t it?  Until Sunday night,  the message hasn’t changed for almost 2 months.

One asked on Thursday that seeing the weather was so warm and it being a holiday weekend, people would surely want to go out more than usual and what difference would it make if the rumours of a slight slackening this week were true.    The weather has been lovely for 2 months, April the best for 300 years…. 95% of people are being paid to stay at home.  It makes no difference at all whether it is a Saturday or a Tuesday surely?

The same with some politicians of all persuasions though some more than others.  Asking idiotic questions from weeks ago about people wanting to know the time-table for going back to normal.  As a small business owner, and one with no money in the bank at that as well as being at high risk due to chronic illness, I can safely say I haven’t given a second thought about it.

Top marks have to go to Labour MP Naz Shah,  not the brightest of even a bad bunch and one previously in all sorts of trouble to do with racism, anti-semitism and Nazi’s, (maybe she just misspelt her name).  But surely on VE day to tweet a photo of Nazi’s just shows how stupid she is?   Of the 2.5million people in what is now India, Pakistan and Bangladesh who fought against Nazis, she manages or decides to tweet a photo of the handful who wore a Nazi uniform. 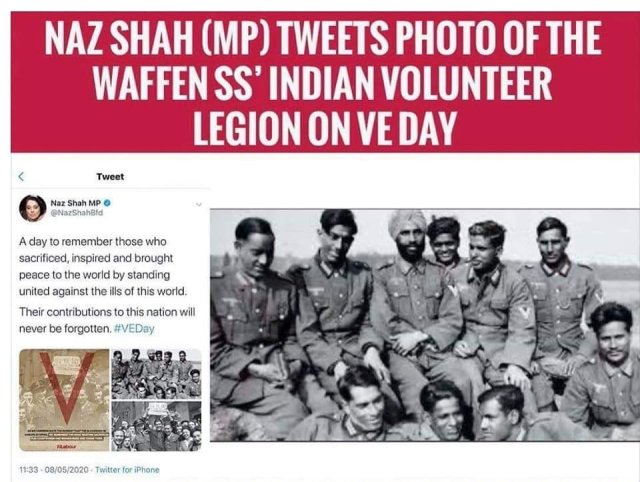 Also I really have a low threshold for people who go into politics and make big issues of ‘identity politics’ to the distraction of almost anything else.  Why can’t people just be people and represent people and work for the good of all people whatever their race, religion, sex or whatever.  They seem to be professionally aggrieved.

I do feel sometimes though, well often, that there are so many stupid people and just by virtue of being rich, connected, vocal they get into positions they don’t deserve by brains or accomplishment.  It is said that those who desire power are those least suited to have it.

I am a writer and traveller with a penchant for history and getting off the beaten track. With several books to my name including several #1 sellers. I also write environmental, travel and history articles for magazines as well as freelance work. I run my private tours company with one tour stated by the leading travel website as being with the #1 authentic London Experience. Recently I've appeared on BBC Radio and Bloomberg TV and am waiting on the filming of a ghost story on British TV. I run my own private UK tours company (Ye Olde England Tours) with small, private and totally customisable guided tours run by myself!
View all posts by Stephen Liddell →
This entry was posted in Life, News, Politics and tagged Coronavirus, Coronavirus Diary, Covid19, Downing Street, Journalists, Naz Shah, News, Stupid. Bookmark the permalink.