Coronavirus Diary 20 – Make do and mend

The current virus pandemic is evoking lots of comparisons with WW2, at least in the U.K.  Though the quantifiable loss of lives and poverty doesn’t come close, ironically the virus takes away the one thing that everyone in the 1940’s had, the ability to gain comfort in the company of others.

One of the things that people are re-discovering is what was once called ‘Make do and mend’, the idea of not throwing any out because the money wasn’t there to buy a replacement which it, itself was not there.  A general air of improvisation.   You have to hand it to Charlotte from Suffolk who obviously has what it takes for that scary run to the supermarket.

I don’t know anyone who epitomised the spirit of Make Do And Mend more than my Grandad.  He was and remains the most resourceful person I have ever met and decades after life had returned to some sort of normality Grandad would be loathe to spend money on anything when it could be repaired or improvised.

We used to always compare him to Compo on Last of the Summer Wine.   Grandad wasn’t quite that bad but he was almost there.   You can see Compo below with the object of his desires, Nora Batty with her famous wrinkled socks who would attack him with her mop, brush, bucket of water or anything else to hand if Compo got too forward with  his affections.  A stereotypically tough northern woman! 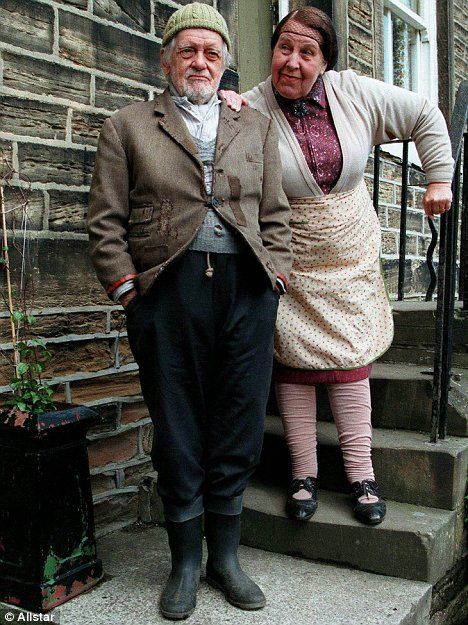 One of the things Grandad repair most often we cups and mugs.  Thinking about it now, I’ve never chipped a mug or a plate but Grandad had a whole cupboard full of seemingly chipped mugs.  Not wanting to waste money he would always repair them with some sort of superglue.  Some of the rims of his mugs could have 4 or 5 repairs on them and some larger repaired chips had been glued on again only to have a smaller chip in that repair later knocked out and then that itself glued back in place.

It was like drinking out of one of those drinking vessels from ancient Rome, Greece or Iran where everything has been re-assembled but it’s cracked from top to bottom like a mosaic.  Some of those mugs it would be hard to find a non cracked or repaired part of the rim to put to your lips.

I decided to channel Grandad in some small way today.  Actually I think he is the greatest influence over me of any real person.  He introduced me to almost everything I like today, history, walks, nature, meeting people from different countries and cultures, train journeys, travelling in general… something we both love(d) but never actually seem to do.   Today though I channeled Grandad with make-do and mend.

You can probably gather I’m not the most proliferate when it comes to consumerism and modern-life and I think my modern style of make-do and mend would meet with his approval in any case.  Even Compo would admire how I am writing this dressed in my SOAS university sweatshirt from 1996 and my often repaired house trousers now on its second shoelace in place of elastic which gave up the ghost a good 10 years ago.

I had 104 boxes of belongings when I moved.  A lot of them aren’t full of mine.   I don’t like buying things or throwing things out but for some reason everyone things because I like history or old things that it is ok to give things to me because they can’t bear to throw them out themselves… or maybe they think I like them.  Either way I have lots of clutter and most of it I didn’t buy.

Almost everything that got moved came over in one piece except for one of my mothers ornaments.  It’s not the sort of thing I’d buy and I have no-one to give these things too so basically I’m just hanging onto them for the next 30-50 years until some house-clearance company throws it all out after my funeral.

But whilst I have them and having so few living beings in my life I may as well treat each as well as I can.    You can see the damage below… it was actually damaged when it was packed at my mothers house but know I would one day move, only now does it seem worth while to sort it out. 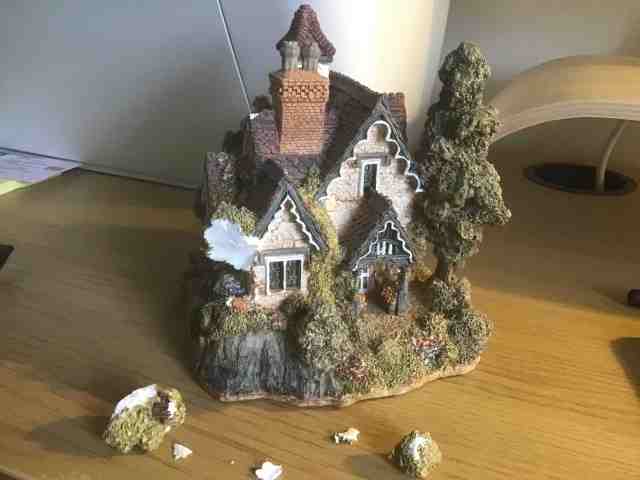 I know what you’re thinking, Stephen might be able walk round London blind-folded and write for Britain but has absolutely no record when it comes to repairing fine china ornaments broken into 6 or 7 pieces.      Wow, thinking about it, have I really become a raconteur at my young-ish age?  Someone who has a life-time of stories and anecdotes?  Perhaps I should use the word Piffle more and get a job as Daily Telegraph column or diary writer.  If I can squeeze in the word ‘Balderdash’ and quote some obscure Greek or Arab philosopher in every day articles then I’m surely half way there to being the next Prime Minister!!

Anyway what I thought might be a reasonably easy job turned out to be more tricky than met the eye.  Obviously using superglue, as Eminem would say you only get one chance and failure’s not a mother …’ng option.  So I did what seemed the most obvious thing and held the biggest piece in first and trying to find where the second largest part would go.   You’d be amazed just how many ways round a quarter of a pottery tree can go I can tell you.

You can see on the photo above that my initial plan didn’t work because putting in the biggest part would make it very difficult to stick in the second largest part so I did them the wrong way round.

By now I know Grandad would be proud and I just had a number of large slivers and the only clue as to where they go were microscopic spots of paint.  Is it is bit of tree or a bit of ivy?  Is it the white from below the roof or just white from the pottery?  And even then, there were repairs within repairs to work out which order they should go in. 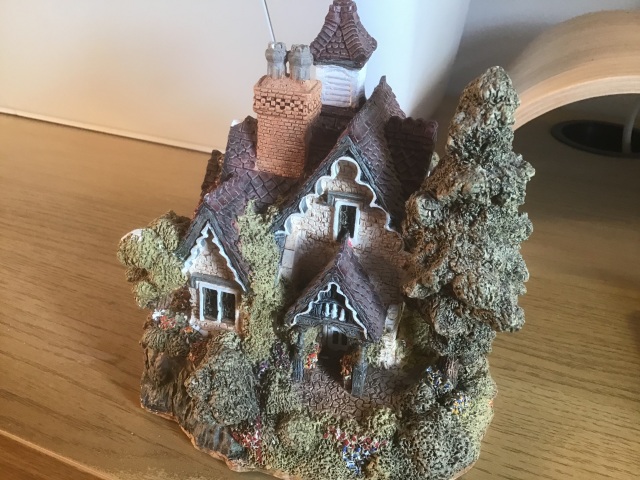 Anyway I found a place for every single piece of pottery and my mothers Lake District china house is as good as new and sat on the shelf next to where I write.

If the tourists don’t come back then I can spend the summer locked in a room repairing some ancient Babylonian statue.  And as Aeschines of Neapolis famously declared, that’s boulderdash!    Don’t hurry back Boris, I’ve got this sorted! 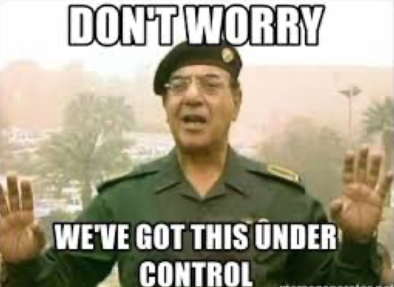 I am a writer and traveller with a penchant for history and getting off the beaten track. With several books to my name including a #1 seller, I also write environmental, travel and history articles for magazines as well as freelance work. Recently I've appeared on BBC Radio and Bloomberg TV and am waiting on the filming of a ghost story on British TV. I run my own private UK tours company (Ye Olde England Tours) with small, private and totally customisable guided tours run by myself!
View all posts by Stephen Liddell →
This entry was posted in Funny & Humour, Life and tagged Coronavirus, Coronavirus Diary, Covid19, Diary, Grandad, Make Do And Mend, WW2. Bookmark the permalink.

6 Responses to Coronavirus Diary 20 – Make do and mend