A peek inside possibly the second smallest home in the U.K.

In my line of work I spend a lot of time walking round palaces, great houses and cathedrals but last week I had the opportunity to revisit one of the smallest houses imaginable in the beautiful Lake District in the country of Cumbria.  What makes this house extra special is not just its tiny size but the fact that it is built on a tiny bridge too.

Centuries ago in the small town of Ambleside a bridge was built across Stock Gyhll, gyhll being the local Cumbrian word for the numerous narrow ravines or valleys in this part of the world and a direct descendent of and old Norse word Gill from the times of the Vikings.

Later, larger nearby bridges made this bridge of the little Beck (or stream) almost obsolete and so a decision was taken to build a house upon it in the 17th century, perhaps to avoid land taxes!

You can see right through the house!

Bridge House was first owned by the local Braithwaite family. who lived in nearby Ambleside Hall.   Originally an apple store, its convenient location to nearby water mills meant that it became increasingly useful despite there originally being a doorways on both sides of the house just incase someone needed to cross the bridge.

Bridge House is possibly the most photographed building in the Lake District, and a popular subject for many artists over the years including Turner.

Lewis Pinhorn Wood’s The Cobbler’s Shop on the Bridge

Lewis Pinhorn Wood’s The Cobbler’s Shop on the Bridge

Over the years the building has seen use as a weaving shed, a counting house for the mills, a cobblers and a chairmaker.  At one point it was even the family home for a man, his wife and six children!  Some younger visitors in particular find this hard to comprehend though I myself remember having to share a tiny lower bunkbed with my brother when staying at my Grandparents for several weeks of the year so it is not that much of a stretch to imagine for myself at least.

Downstairs with the Victorian stove which makes things very cosy!

In the 19th century when it became a tea house, a stove was added to Bridge House but by the 1920s, Bridge House was in need of repair work. Fortunately, a group of dedicated local supporters, including William Heelis (who is better known as Beatrix Potter’s husband) recognised this and raised enough money to buy it and the immediate surroundings.

View of the upstairs of the house from the doorway.

The building was then donated to the National Trust to maintain the property and though in the 1940s it was also used as a bric-a-brac and antiques shop, it served as a tourist information centre from 1956. 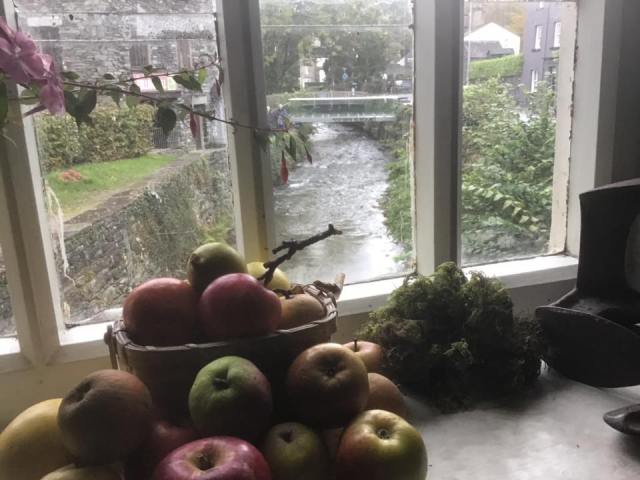 A room with a view.

It only takes a few minutes to visit Bridge House in Ambleside and a little longer to listen to the great National Trust guide who can give you more information.  As you can kind of see in the photo above, just a minute away is an old water mill on the left and the wheel is still turning today.

Bridge House was very nearly brought down 10 or so years ago when unprecedented rainfall brought the little Beck right up to the base of the house as a roaring torrent.  It would be such a shame to lose this incredibly tiny and quirky old house.   Until then, you can visit it with Ye Olde England Tours

I am a writer and traveller with a penchant for history and getting off the beaten track. With several books to my name including a #1 seller, I also write environmental, travel and history articles for magazines as well as freelance work. Recently I've appeared on BBC Radio and Bloomberg TV and am waiting on the filming of a ghost story on British TV. I run my own private UK tours company (Ye Olde England Tours) with small, private and totally customisable guided tours run by myself!
View all posts by Stephen Liddell →
This entry was posted in Cumbria & The Lake District, history, Life, Travel, Ye Olde England Tours and tagged Ambleside, Bridge, Bridge House, Lake District, national trust, Small House, Smallest House. Bookmark the permalink.

3 Responses to A peek inside possibly the second smallest home in the U.K.