The West Brompton Time Machine in the heart of London

You can find most things in London but it might not be your first guess as to be the location of what is currently thought to be the most likely candidate for a Time-Machine in the world, if such a thing can really be.   And I don’t mean the Tardis  from Doctor Who which is to be found most days just outside Earls Court Tube Station.

Yes if you’re wondering how I manage to blog, write and do tours every day without getting into too much timey-wimey details this is my hidden secret. 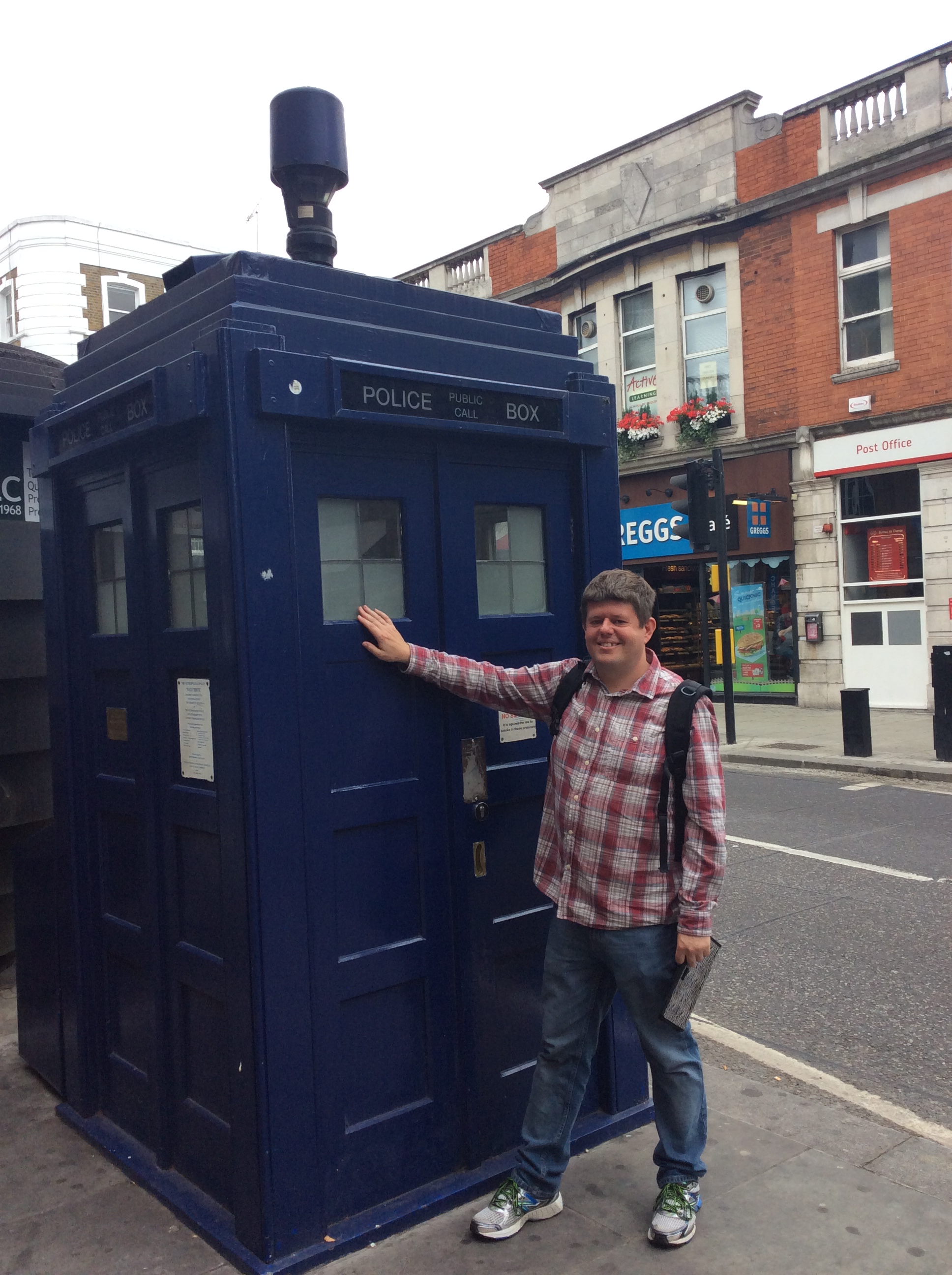 However, when the Doctor is away fighting Daleks and the Bakerloo Line is heated like a tandoori oven then there is a fallback, albeit one that is largely hidden away and with a missing key and it is to be found in Brompton Cemetery.

Brompton Cemetery is one of the ‘Magnificent Seven’ burial sites established in the 19th century  during that time in our history when London was becoming inhabitable due to the ever growing number of dead accumulated over the last 2,000 years..

In amongst its tree-lined avenue, classical colonnades, underground catacombs and wildlife of unimaginable parallels in Central London is the mausoleum of Hannah Courtoy. 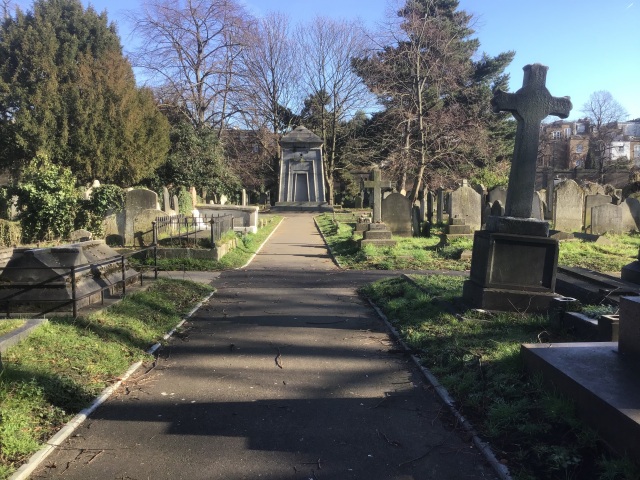 I’ve been aware of the existence of the time-machine since the 1990’s and it periodically makes the news before falling back into obscurity.  The tomb and myths that surround it combine some of the very Victorian obsessions: death, weird science and Egyptology. Built in 1854, Courtoy’s memorial is supposedly a collaboration between Joseph Bonomi who was an Egyptologist and sculptor along with and Samuel Alfred Warner who was an inventor of naval weapons and possibly a charlatan, well really likely a charlatan but I’m a romantic at hear so let’s give him the benefit of the doubt.

Hannah Courtoy was a fabulously rich woman who possibly gained her wealth through nefarious means and a hotly disputed will.  Like many in fashionable society at the time, she had an interest in ancient Egypt and the concept that her tomb is something of a Victorian stone-walled Tardis is a mixture of historical fact, supposition, and unfettered flights of the imagination.

It is true that Hannah, who died in 1849, was most likely acquainted with Joseph Bonomi, a well-known sculptor and Egyptologist whose relatively modest gravestone lies only a few metres away from the Courtoy mausoleum. It is rumoured that Bonomi designed Hannah’s mausoleum, a theory given some credence by its pyramid-shaped peak and by the mysterious hieroglyphics inscribed on the walls of the tomb and on Bonomi’s own headstone.

The Victorians were fascinated with the idea of time travel, and some believed the pharaohs had discovered its secrets. Perhaps Bonomi may have learned the secrets of time-travel during one of his expeditions to the pyramids? 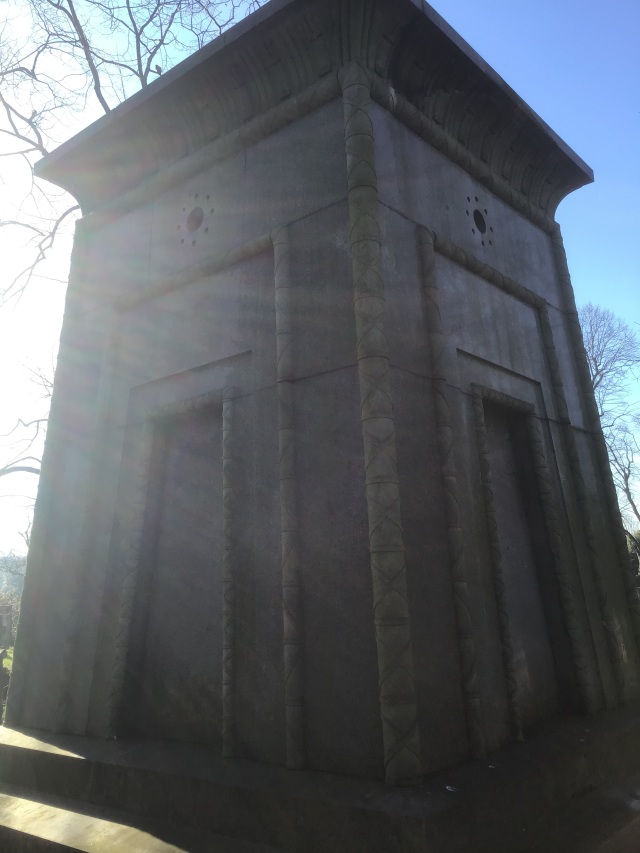 You shalt not pass!

If he did, he could have passed it on to his business partner, a mysterious London inventor of naval weaponry called Samuel Alfred Warner, who is also buried in Brompton Cemetery. Warner’s inventions included an invisible shell, as someone put it, “a bomb that could be teleported a short distance – a kind of psychic torpedo”.

Incredibly, the Royal Navy was so intrigued by Warner’s metaphysical armament that it allowed him to stage several demonstrations. Even more incredibly at least one ship was destroyed during these trials, although none of them offered conclusive proof of the weapon’s efficiency.

The connection with Warner and his “psychic torpedo” has persuaded some that the Courtoy mausoleum is more likely to be a teleportation chamber than a straightforward time machine. He posits that it was part of a network of chambers erected in the “magnificent seven” cemeteries that were built in a ring around central London in the 19th century. An eighth mausoleum resembling the Courtoy tomb is located in Montmartre Cemetery in Paris, so if the teleportation theory is correct, the network might be used to pop over the Channel.

Supporters of the time machine theory often claim it is significant that the Courtoy mausoleum is the only tomb in Brompton Cemetery for which there are no plans and no key.

Since its construction in 1854 a legend has arisen that it houses a secret time machine. This was born out of the mysterious inscriptions based on Egyptian hieroglyphics and some of Leonardo Da Vinci’s more obscure sketches that adorn the mausoleum’s exterior walls and supposedly reveal the secret of time travel to anyone schooled enough to read them. HG Wells was inspired by this fantastical story to write his novella, “The Time Machine” and it no doubt did much to inspire a similar network of teleportation portals in the contemporary works of American writer Edgar Rice with his  John Carter of Mars character.

Of course there would be an easy way to see if the tomb is a time machine or teleportation unit and that would be to go inside.  Aside from a coffin or too and likely the largest collection of spiders webs this side of an Indiana Jones movie, it should be just another empty relic.  Then again there is that .1% chance there might be something more exciting inside.

Sadly going inside just isn’t an option. Samuel Warner was murdered in mysterious circumstances in 1853 and shortly afterwards the key to the mausoleum’s great bronze door went missing.  Apparently both Warner and Bonomi were involved in the Occult which may have helped them discover the secrets of time travel from hieroglyphs he saw on one of the expeditions to Egypt. Courtoy and her daughters were known as eccentrics and it’s speculated they could have financed the building of a time machine. Warner died in suspicious circumstances in 1853 when the mausoleum was finished. 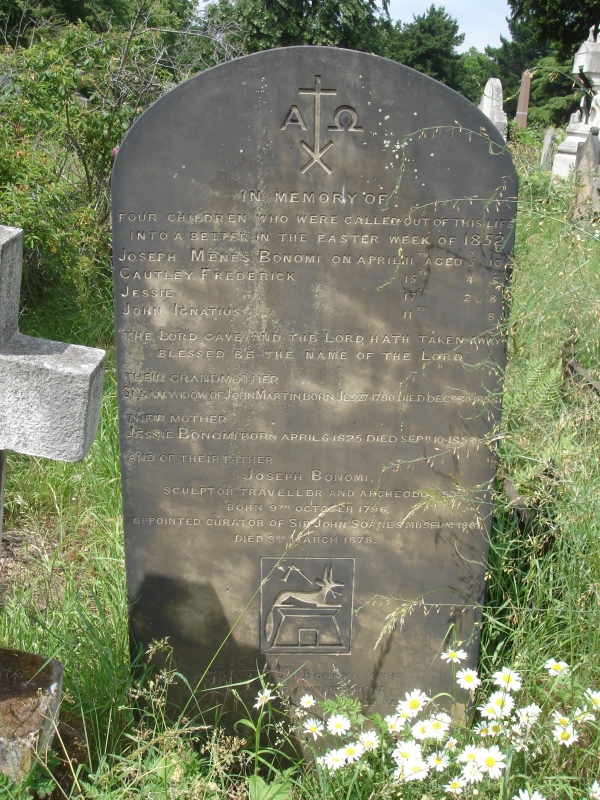 A Time-Travelling partner in crime?  Just a few minutes walk from the Time-Machine… though possibly several hours looking for it if you don’t know where it is!

Now here’s where the story differs: some say he died because of what he discovered while working on the time machine and that it is now housed in the mausoleum for safe keeping. Another story is that Bonomi killed Warner to stop the plans of the working time machine falling into the wrong hands. Others believe that Warner didn’t die at all and simply travelled back or forward in time and disappeared.

The monument like most structures in the cemetery has listed status, it cannot be damaged in anyway as it is afforded a similar protection to buildings like the Houses of Parliament, Stonehenge and err Abbey Road crossing from the Beatles.   So until the missing key is found we are all stuck with using Eurostar to get over to Paris quickly or the Tardis for a spot of time-travel. 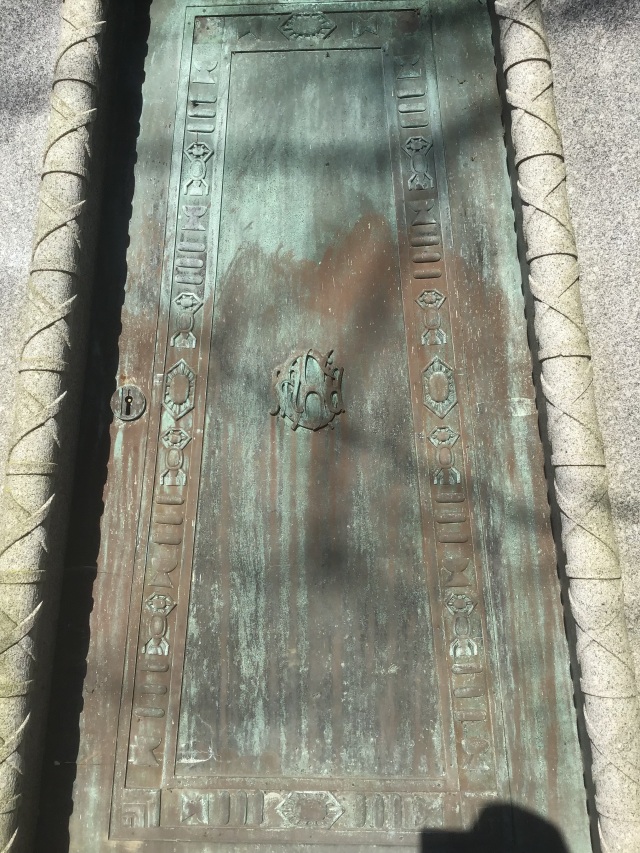 The doorway is covered in ornate Egyptian hieroglyphics

I’ve been visiting the West Brompton Time-Machine for 819 years now and if nothing else I can testify it is a fascinating place to visit.  In the brilliant stark winter sunshine it stands tall and bulky like the obelisk in 2001.  Come on a damp and overcast afternoon and when the crows are cawing and the daylight is falling then it takes on an entirely different experience.  Whilst in Midsummer it almost blends in and is hidden amongst the dense foliage of trees and fast growing grasses and ground shrubs. 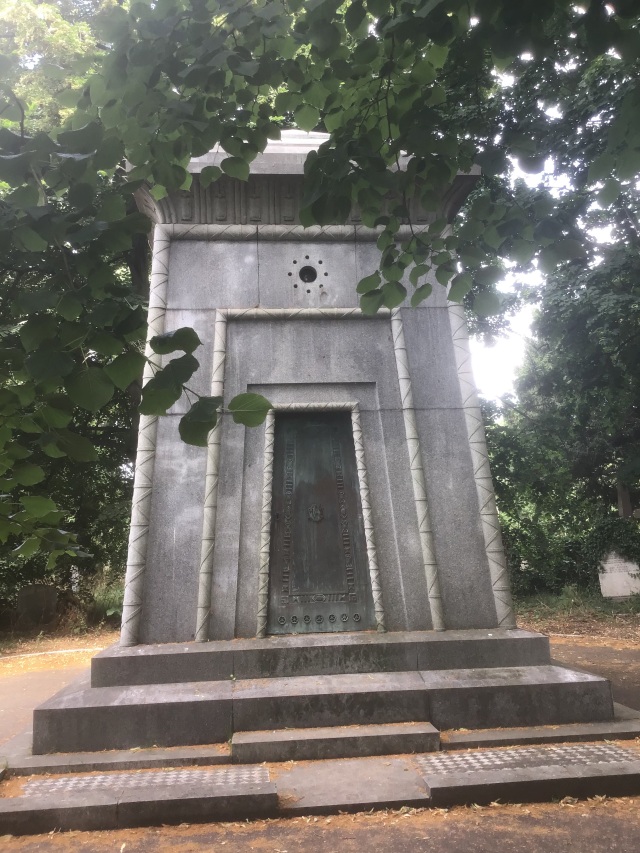 There are mysterious dials and openings along the base of the door and above it.

Don’t forget to read Mondays post about Brompton Cemetery in general and if you’re in the area on Sunday 21st July, why not visit the open day and take a walk down the Catacombs!  If not, but you love cemeteries then take a look at my London Cemetery Tour which visits several of the best with the Time-Machine being a feature of course!

My blog is full of slightly ghostly goings on and terrible tales of Victorians and their cheek by jowl existence with death so why not read one of the older posts such as Dancing On The Dead  or for a slightly more recent figure from impoverished London, Dr Alfred Salter

I am a writer and traveller with a penchant for history and getting off the beaten track. With several books to my name including several #1 sellers. I also write environmental, travel and history articles for magazines as well as freelance work. I run my private tours company with one tour stated by the leading travel website as being with the #1 authentic London Experience. Recently I've appeared on BBC Radio and Bloomberg TV and am waiting on the filming of a ghost story on British TV. I run my own private UK tours company (Ye Olde England Tours) with small, private and totally customisable guided tours run by myself!
View all posts by Stephen Liddell →
This entry was posted in history, Life, London and tagged Brompton, Cemetery, Death, Dr Who, Egypt, Hanna Courtoy, Joseph Bonomi, Time Travel, Victorian, Ye Olde England Tours. Bookmark the permalink.