Alexander Parkes – The man who changed and poisoned the world

Alexander Parkes is another one of those people from the Victorian Age that is forgotten despite him changing the world and his story is being told in a new exhibition in Bow, East London.

The fact the the exhibition is in East London may give something of a clue that Alexander Parkes is the man who invented the very first plastic. 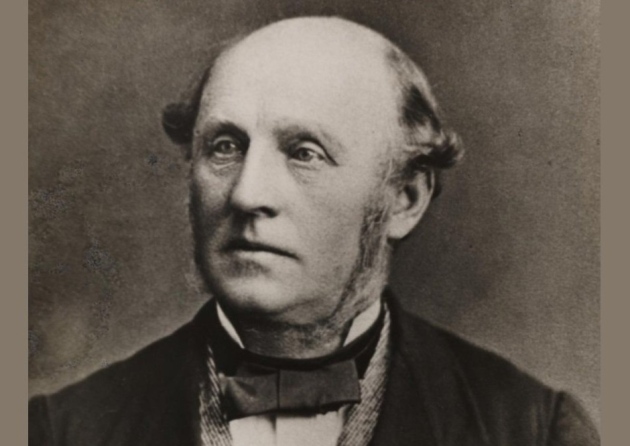 He was trained as a chemist and was something of an industrial inventor with over 60 patents successfully filed (including Vulcanising rubber) and it is in a long since demolished factory in Hackney Wick that Alexander worked on the chemical processes that allowed him and his colleagues to create what are now common household objects such as plastic combs.

However the impact of mass-production and consumerism has impacted upon the planet in a way that even the most far-sighted and ingenious Victorian inventor could ever have  imagined.

The common comb has real teeth biting into the East End’s industrial heritage and its links to modern-day global pollution.

It is part of the story of how plastic was invented by a Victorian chemist in a factory at Hackney Wick which is being told in an exhibition opening next week in Bow.

The inventor responsible for a chemical process that probably led to plastic pollution on the Thames and around the world two centuries later was Alexander Parkes.

His invention 160 years ago has been researched by Bow Arts organisation, into how his process has had a global impact ever since.

The ‘Raw Materials Plastics’ exhibition is being opened next Friday by his descendant Roderick Parkes, exploring the forgotten industrial heritage around the River Lea. 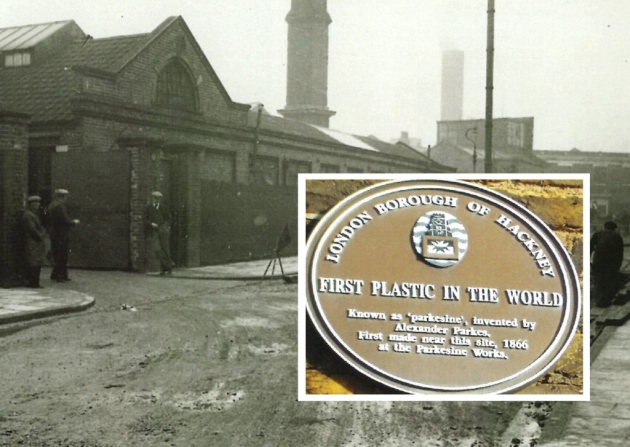 Parkes created Parkesine in 1865, a precursor to celluloid and one of the world’s first man-made plastics, developed at the Parkesine works in Wallis Road.  This new marvel was created during research to create material to mimic rare and endangered natural materials such as ivory and tortoiseshell. Parkesine led to the development of the Ivoride Works in Homerton in the late 1860s and eventually to the establishment of the industrially successful British Xylonite Company, which included the eponymous Halex brand in Hale End, Walthamstow.

The exhibition includes the earliest Victorian plastics made by Parkes in the 1860s; surprisingly ornate pieces inlaid with mother of pearl and precious metals, coloured with brilliant blues and greens through recently invented dyes. An early billiard ball illustrates the game changer Parkes’ invention provided in replacing ivory, the material previously used to make the balls of this common game. The British Xylonite Company then went on to produce Europe’s supply of ping pong balls.

The story of plastic’s evolution continues through the 1930s with Art Deco objects from the Halex brand, including an imitation shark-skin or ‘shagreen’ dressing table set and trinket boxes with iridescent surfaces mimicking semi-precious stones. Also on show will be photographs of the factory working environments, including the company’s all too necessary ‘in-house’ fire brigade and – a further testament to the flammable nature of the materials involved – a copy of the factory rules; bringing matches or lighters on site could lead to instant dismissal. The exhibition continues with the later years of the British Xylonite Company activity in east London, including its contribution to the second world war and the 1960s celebrations of its Walthamstow base.

Bow Arts has been working on the project with the Plastics Historical Society, the V&A and Science museums, Vestry House Museum in Walthamstow, University College London and local authority archives in Hackney, Newham, Barking & Dagenham and Waltham Forest.

The free exhibition opening May 17 at the Nunnery Gallery at 181 Bow Road, opposite Bow Church, runs until August 25 (closed Mondays).

I am a writer and traveller with a penchant for history and getting off the beaten track. With several books to my name including several #1 sellers. I also write environmental, travel and history articles for magazines as well as freelance work. I run my private tours company with one tour stated by the leading travel website as being with the #1 authentic London Experience. Recently I've appeared on BBC Radio and Bloomberg TV and am waiting on the filming of a ghost story on British TV. I run my own private UK tours company (Ye Olde England Tours) with small, private and totally customisable guided tours run by myself!
View all posts by Stephen Liddell →
This entry was posted in Heritage, history, Life, London, News and tagged Alexander Parkes, Environment, Green Issues, Industry, Inventor, Nunnery Gallery, Plastic, Victorian. Bookmark the permalink.