A holiday from hell for two Russian murderers!

Posted on September 17, 2018 by Stephen Liddell

I’ve been on my fair share of nightmare holidays.  Sank on the Nile, cars blown up, marooned in a live mine-field… that sort of thing but even I haven’t had quite as rough a time as Ruslan Boshirov and Alexander Petrov, Russia’s answer to Michael Palin or Levison Wood.

Just two every day men, absolutely not spies, assassins or muderers from Russia who last week were revealed to have the most convincing alibi in the history of travelogues.     For these two intrepid traveller went all the way from Russia to London and then Salisbury (twice in a weekend) for a spot of sightseeing but it all was to go so terrbily wrong.  Become wanted men across the globe is alost the least of their problems.

No wonder the pair turned to that most neutral and authorative news channel to demonstrate their innocence, Russia Today.  Of course this is all incredible stuff as a few weeks ago when the camera footage was leaked the Kremlin and its media proclaimed the footage to be fake and the men to not even exist!

So what exactly happened? Two ordinary chaps with a keen interest in sports nutrition who had taken advantage of a buy-one-get-one-free Aeroflot offer of a two-city break in London and Salisbury. After spending their first night in a boutique, anonymous hotel conveniently situated miles from any mainline station, they had managed to find the only Saturday train to Salisbury that hadn’t been cancelled… rather than enjoy the countless sights and numerous cathedrals of London.

As we all know, the British weather is hugely changable and these poor sods found out that they just hadn’t been prepared for the intense cold of a Wiltshire spring after the blazing heat of a Moscow winter. “We couldn’t do it because there was muddy slush everywhere,” they said sadly. “The town was covered by this slush. We got wet, took the nearest train and came back to London.”

As you can see from the footage below, it was almost impossible to walk through Salisbury that day with all the snow and slush around.

It was only after they had got back to London that they realised they had missed the famous cloisters and one of the four surviving original copies of Magna Carta. So they had got back on the train the following day and headed back to Salisbury to complete the tour. And what a glorious day it had been, taking in the cathedral’s spire and a chicken and bacon sandwich from Pret.

The second day hadn’t been altogether a success. First they had got a bit lost – they had knocked on a door that just happened to be Sergei Skripal’s – and then they’d had to cancel their Stonehenge visit even though hundreds of people managed to get to Stonehenge perfectly easily.

The part of the interview that I liked best was the fact that what really hurt Petrov and Boshirov the most was that they had been accused of carrying Nina Ricci perfume. “Isn’t it silly for decent lads to have women’s perfume?” Boshirov asked almost on the edge of tears. “The customs are checking everything, they would have questions as to why men have women’s perfume in their luggage. We didn’t have it.”

So it’s ok for them to be wanted as murderers but to accuse them of carrying perfume and possibly touching on some latent homosexuality was just too much for them to bear.

Well thanks for the probing questions of the finest figures of Russian television journalism, that clears up the whole thing should you be a bear chested botox injected Russian dictator.  To everyone else though, something just doesn’t seem to add up… like anything!

I go to Salisbury a lot and you can see the spire of the Cathedral from miles away, well off into the countryside.  It’s hard to imagine not being able to find this huge building, even more so if you have memorised the Wikipedia facts on Salisbury as these two travellers had.

Maybe it is just me but I’ve also never been to Salisbury and accidentally sprayed poison on someones door either.  Maybe I need to add that on to my Salisbury and Salisbury Cathedral tour.

It seems it isn’t just myself who has doubts about how things turned out.  As usual, the finest minds of Twitter had their say too.

If only the Cybermen in Dr. Who had thought of visiting Salisbury, they might well have had their innocence believed… on Russia Today at least. 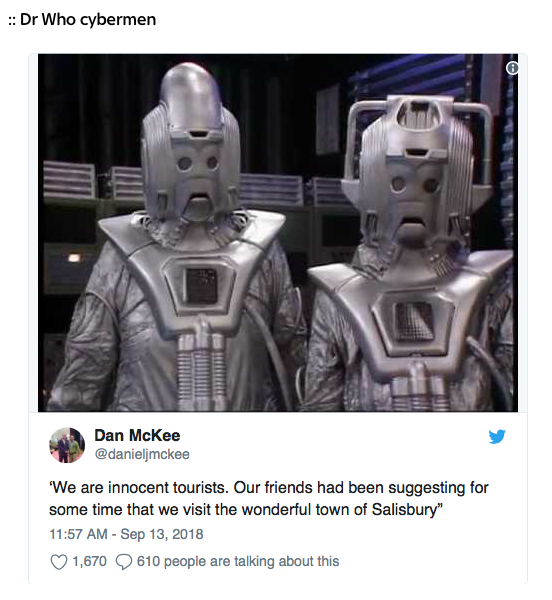 Soon, every invading alien race were getting in on the act, here are the Daleks, clearly lost and not invading London.

If only the spies had spoken to some of the locals who helpfully posted advice on how to reach Salisburry Cathedral and its legendary 123 metre spire.

It makes you wonder how they could make a hash at it, at least to Alec who doesn’t seem to entirely swallow their alibi.

One thing is for certain, they are no James Bond. 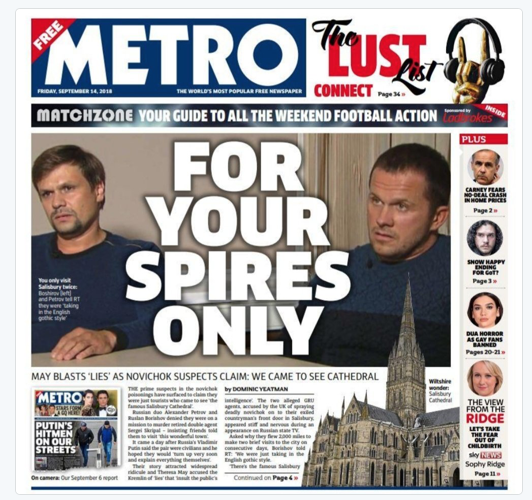 The cartoon below is only vaguely exaggerated.  I remember in preparation for my James Bond Tour, I went round and took some photos of various locations and started with the Mi6 headquarters.  For the rest of the day, I kept bumping into a stereotypical old Russian Babuska woman at various spots around London.

One of the worst things about spies and espionage is that it sows seeds of doubt in the minds of everyone.  If it wasn’t Ruslan Boshirov and Alexander Petrov who were the real spies then it has to be someone.  Maybe people who have lived here for more than a weekend and realise we have more security cameras on the streets than Russia and China put together.  Could it even be everyones most favourite Russian, Aleksandr the Meercat and his long suffering head of IT Sergei have not only ditched their Meerkat Dating Agency but could they have given up on encouraging us to buy cheaper car insurance to get muddy their paws in spying?  Hmmmm.

Thankfully not if the UK Defence Journal has any gravitas at all.  It must be The Borg, they don’t even realise that Salisbury is a city and not a town.  That’s exactly the sort of blunder that all half-decent spies get caught with in the movies… though such spies are a few levels above Ruslan Boshirov and Alexander Petrov! 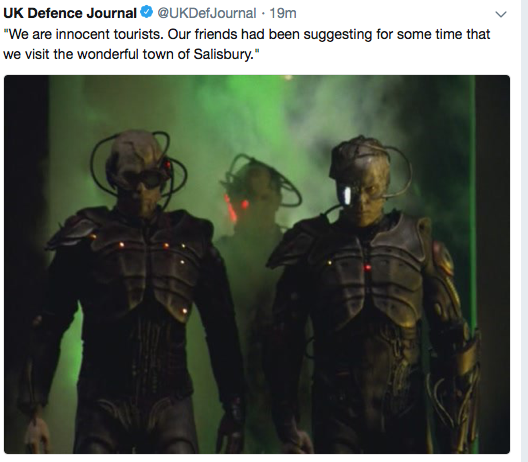 All of this mad me think of all the historical injustices that have occurred through the years that could so easily be explained away.   We would never have to Remember, Remember, the Fifth of November if only Russia Today had been around to interview Guy Fawkes.

We have to bring this post to an end somehow and what could be better than with our glorious leader putting his two spies in their place. 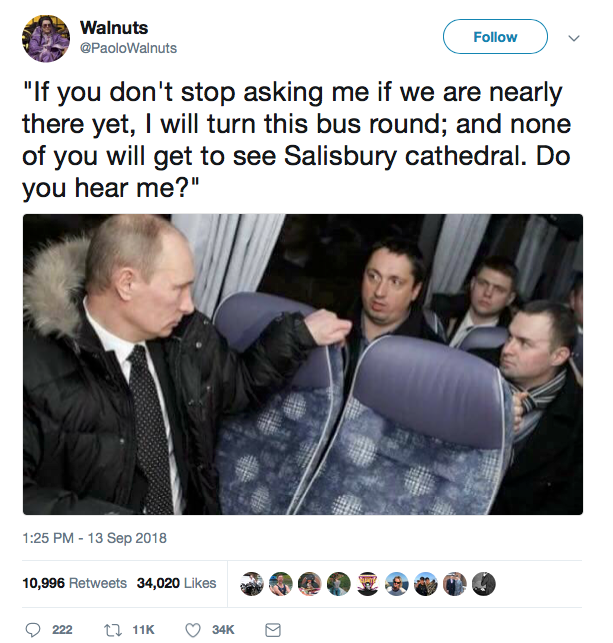 I am a writer and traveller with a penchant for history and getting off the beaten track. With several books to my name including a #1 seller, I also write environmental, travel and history articles for magazines as well as freelance work. Recently I've appeared on BBC Radio and Bloomberg TV and am waiting on the filming of a ghost story on British TV. I run my own private UK tours company (Ye Olde England Tours) with small, private and totally customisable guided tours run by myself!
View all posts by Stephen Liddell →
This entry was posted in Funny & Humour, Life, News, Travel and tagged Alexander Petrov, James Bond, Murders, Ruslan Boshirov, Russia, Russia Today, Salisbury, Salisbury Cathedral, Sergei Skripal, Spies. Bookmark the permalink.

5 Responses to A holiday from hell for two Russian murderers!