2,000 years on Bath Abbey is set to use the famous hot water that the Romans did!

Long before the Romans, it was the ancient Celts who lived across the British Isles who first noticed the hot waters spewing forth from deep beneath the the surface of the Earth,  In fact, they used to pray there.  When the Romans arrived, they built a complex of baths and steam rooms to harness the power of the sacred springs.  They would bathe here, use the hot and healing waters rich in minerals to treat medical ailments, worship here and conduct business deals.

Modern day tourists still flock to the famous Baths and though the water still is rich in minerals and literally scorching hot, health and safety regulations and issues related to mass-tourism mean our contact with the waters is nothing more than a swig of the waters at the end of the tourist route which as one little boy told me two years ago, rather tastes of smelly socks.

Now 21st century engineers are to use the water from the same hot springs beneath the city of Bath to heat its medieval abbey.  Builders will shortly begin work on an underfloor heating system using the waters from the springs which supply the historic Roman baths. 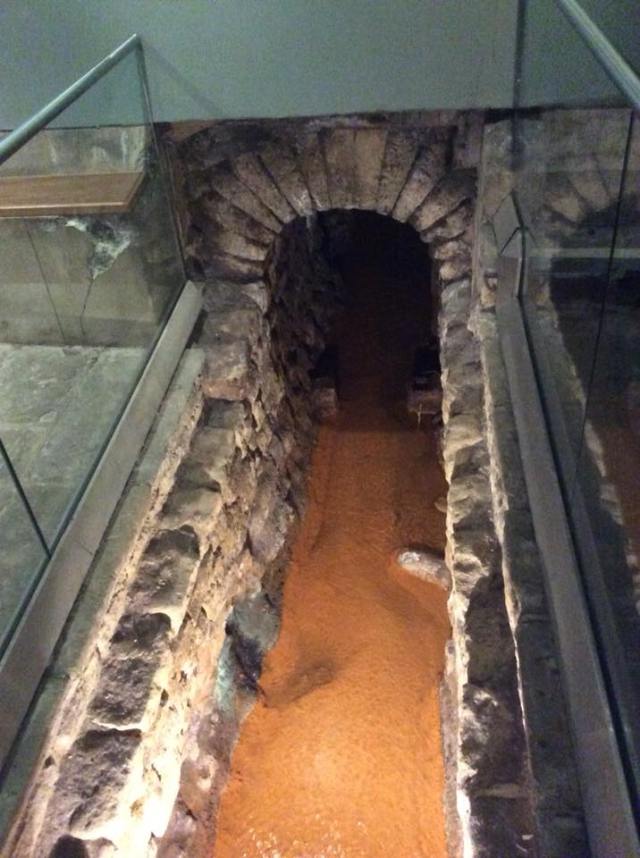 Part of the Roman drain that carries excess hot water under the streets of Bath.

As part of the £19.3 million project heat exchangers will be installed in the Great Roman Drain running beneath the city’s streets – through which 250,000 gallons of hot water flow from the Sacred Spring beneath the baths to the River Avon each day – to capture the heat and direct it to the abbey.

The scheme, being funded by the Heritage Lottery Fund, envisages 1.5 megawatts of continuous energy being produced, enough to heat the church and surrounding buildings, as well as the Romans Baths and Pump Room complex itself.

Bath Abbey early on a monday morning with the exterior to the Roman Baths just to left of the photo.

During building work archaeologists will be on hand to ensure any artifacts that are uncovered are recorded and preserved.

The project got the go-ahead after Bath and North East Somerset Council granted the abbey authorities a lease of rights to use four hot springs, which bubble up through fissures in the limestone on which the city is built.

Cross-section of the Mendip Hills and the route of the water to Bath. (Andrews et al., 1982)

Mr Curnock said: “This is a truly exciting and inventive way of tapping into Bath’s most famous resource to create sustainable energy. As far as we know, it has never been done before on this scale.”

Although the waters of the original Roman baths are out of bounds to the public a series of more recently drilled boreholes direct some of the water to the newly built Thermae Bath Spa and the refurbished Cross Bath.

What could be better than the two most iconic attractions to be heated by the famous thermal waters to which the city owes its existence?

The Roman Baths and Bath Abbey

If you fancy feeling some geothermal energy for yourself in very historic surroundings, why not come on a tour with me at Ye Olde England Tours and visit Bath and Stonehenge in a day trip from London!

I am a writer and traveller with a penchant for history and getting off the beaten track. With several books to my name including several #1 sellers. I also write environmental, travel and history articles for magazines as well as freelance work. I run my private tours company with one tour stated by the leading travel website as being with the #1 authentic London Experience. Recently I've appeared on BBC Radio and Bloomberg TV and am waiting on the filming of a ghost story on British TV. I run my own private UK tours company (Ye Olde England Tours) with small, private and totally customisable guided tours run by myself!
View all posts by Stephen Liddell →
This entry was posted in geography, history, Science and Engineering, Travel, Ye Olde England Tours and tagged Bath, Bath Abbey, Bath and Stonehenge, Energy, Green Issues, Renewable Energy, Roman Baths. Bookmark the permalink.

1 Response to 2,000 years on Bath Abbey is set to use the famous hot water that the Romans did!