How the last invasion of Britain was foiled by a lady with a pitch-fork.

This week sees the anniversary of the last attempted invasion of Britain.  Most people will have heard of the Battle of Hastings in 1066, the last time these islands were conquered.  There were a few invasions before that occupied various parts of the country from the Romans in the south to the Vikings in the North.  The Danes, Saxons and Angles in the east to the Irish in the west.

There can be no invasion attempt before or after 1066 quite like the French invasion of 1797. The location was the small fishing village of Fishguard in sourth west Wales and the date was the 22nd February 1797.

In 1797, Napoleon Bonaparte was busy doing what he did best, conquering much of the rest of Europe.  In his absence the newly formed French revolutionary government, the Directory, appears to have devised a ‘cunning plan’ that involved the poor country folk of Britain rallying to the support of their French liberators.

That seems to be the thing about revolutionaries, they all seem to think the oppressed will be all too happy to throw off their shackles.  Stalin came to London a century later hoping for the impoverished to rise up and he got little further than a few punch-ups and bar brawls.  It’s not like ISIS are that appealing to us either despite all the ‘enticements’ they offer!    At heart if Britain is anything, it is a laid-back middle of the road, keep calm and carry on sort of place and we’re just not that into radical changes that always end up to be useless.

However, the French revolutionaries weren’t to know this and some 1400 troops set sail from Camaret on February 18th, 1797.  Remarkably, the man entrusted by the Directory to lead their invasion was another revolutionary but this time an Irish-American septuagenarian by the name of Colonel William Tate.    Tate reportedly disliked the British because his family had been killed by pro-British Native Americans in the American War of Independence, and he advocated Irish republicanism.

Understandably Napoleon had reserved the cream of the French Republican army for invasions elsewhere in Europe and so Colonel Tate’s force comprised a ragtag collection of soldiers including many newly released jailbirds. Tate’s orders were to land near Bristol, England’s second largest city and destroy it, then to cross over into Wales and march north onto Chester and Liverpool.

Right from the off however, things started to go awry.  Wind conditions made it impossible for the four French warships to land anywhere near Bristol, so Tate made the best of things and instead set a course for Cardigan Bay in southwest Wales.

On Wednesday February 22nd, the French warships sailed into Fishguard Bay to be greeted by canon fire from the local fort.    The French thought the gun fire was part of a well-oiled defence group when in actuality the cannon was being fired as an alarm to the local townsfolk.

The ships warily withdrew and sailed on until they reached a small sandy beach near the village of Llanwnda. Men, arms and gunpowder were unloaded and by 2 am on the morning of Thursday February 23rd, the last invasion of Britain was well underway. The ships returned to France with a special despatch being sent to the Directory in Paris informing them of the successful landing.

Unfortunately for the revolutionaries, the French invasion force appear to have run out of enthusiasm for the invasion as soon as their feet touched dry ground. Perhaps as a result of years of prison rations, they seem to have been more interested in the rich food and wine the locals had recently removed from a grounded Portuguese ship. 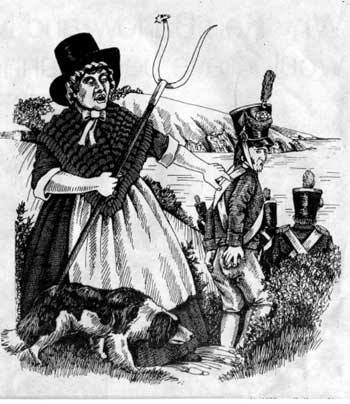 During their two days on British soil the French soldiers must have shaken in their boots at mention of name of “Jemima Fawr” (Jemima the Great), a 47-year-old Jemima Nicholas and wife of a Fishguard cobbler. When she heard of the invasion, she marched out to Llanwnda, pitchfork in hand, and rounded up twelve Frenchmen. She ‘persuaded’ them to accompany her back into town, where she locked them inside St Mary’s Church and promptly left to look for some more!

Bizarelly, documents were drawn up by Tate’s officers that referred to the British coming at them “with troops of the line to the number of several thousand.” No such troops were anywhere near Fishguard, however hundreds, perhaps thousands of local Welsh women dressed in their traditional scarlet tunics and tall black felt hats had come to witness any fighting between the French and the local men of the militia.

Is it possible that at a distance, and after a glass or two, those women could have been mistaken for British army Redcoats? 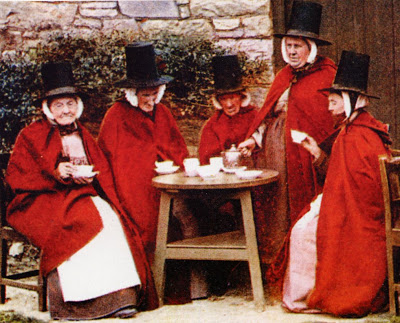 An old photo depicting Welsh ladies in their traditional dress.

After a looting spree, many of the invaders were too drunk to fight and within two days, the invasion had collapsed.  Colonel Tate’s force surrendered to a small local militia force led by Lord Cawdor on February 25th 1797.  Fittingly for such a botched and drunken invasion, the terms of surrender were agreed and signed  in the Royal Oak Pub in Fishguard and the events are still remembered on the sign above the front door. 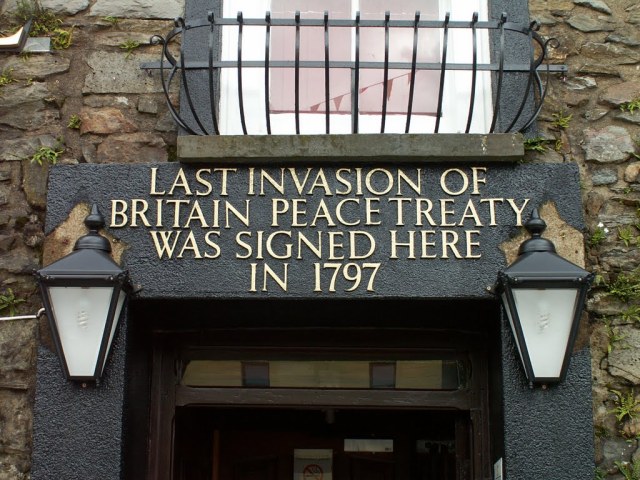 The last invasion of Britain ended in this Royal Oak pub, how fitting!

After the battle, Jemima became a Welsh heroine and was awarded a pension of £50 a year for life which in those days was a huge sum of money.    Colonel William Tate and his motley crew suffered brief imprisonment before they were returned to France in a prisoner exchange in 1798.

This wasn’t quite the last enemy action by a ground force in British history.  For that we can come right up to the Second World War and even lesser known battle at Graveny Marsh.  It shows how long I have been blogging as I assumed I had already written about this but I haven’t so that can be my next blog post!

For two interesting posts of a similar time, why not check out the fascinating story of Peter The Wild Boy  and one of my personal favourite’s Mad Jack. John “Mad Jack” Mytton – The craziest man in history!

I am a writer and traveller with a penchant for history and getting off the beaten track. With several books to my name including several #1 sellers. I also write environmental, travel and history articles for magazines as well as freelance work. I run my private tours company with one tour stated by the leading travel website as being with the #1 authentic London Experience. Recently I've appeared on BBC Radio and Bloomberg TV and am waiting on the filming of a ghost story on British TV. I run my own private UK tours company (Ye Olde England Tours) with small, private and totally customisable guided tours run by myself!
View all posts by Stephen Liddell →
This entry was posted in history, Life and tagged Fishguard, Fishguard 1797, Jemima Fawr, Jemima The Great, Last Invasion of Briatin, Napoleon, Royal Oak Pub, Wales. Bookmark the permalink.

8 Responses to How the last invasion of Britain was foiled by a lady with a pitch-fork.