Waking up early for success

I don’t know about you but I have always been an early bird.  Even when I was little, I was up by 6am and today if I make it to 6am then it is a great lay-in.  For some reason I just wake up even if I am really tired.  I’ve never been woken up by an alarm clock, I’ve never needed one and never owned one.  Even if I have to be up at 2.30am to catch an early morning holiday flight then I just always wake up at 2.25am.

As a child it was a bit annoying as everyone was in bed and I couldn’t make a noise or do anything but as an adult it is mostly an advantage, except for when it is a day off and it would be nice to sleep in until 6 or 7am.    For me though it doesn’t matter if it is a Sunday morning in July or a Monday morning in February, it’s always the same.  Except of course for the daylight as in the UK getting up even at 5.30am means you’re really making breakfast in the dark from the end of July until about late April.

There has to be some advantage though hasn’t there?  Of course there is.  The early morning is when I am most productive?  I can write an entire blog post by 6 or 7am.  If I’m in the world of book writing then I can write down a good thousand words before there is any sign of life outside on the streets.   Of in business, I can read and answer emails before anyone else in the UK but also catch people in Asia quite early in the morning or in North America before they go to bed which has secured quite a lot of tour bookings I can assure you.

If you get up an hour earlier than everyone else then it gives you an extra 15 days per year of otherwise wasted time.  I’m guessing that my usual 5am get up is around 2 hours extra a day so I get an extra month, every year.  I think I will call it Stephember 🙂

Despite that, I am busy pretty much all day, every day.  I start actively working around 5,30am-6am with some emails and then with the odd break for a cup of tea or light snack, I am likely still to be at my desk at 7pm or later.  If I have tours then I usually leave home just before 6am, get home at 6-7pm and then have admin work to do before bed.

It’s hard work being an entrepreneur but my business has grown 500% from year 1 to year 4 and it is showing no sign of slowing down with May and June my most productive tour months ever whilst at the same time I’m about to have one book published and am working on another… as well as other projects.

I thought I would look around and see what other much more famous and successful people do regarding their waking habits and it seems to me that the top of the career ladder is full of people who love their desk more than their bed.

Apple CEO Tim Cook is known for sending out company emails at 4.30 in the morning and by 5 am, he can be found in the gym. And he works late too, priding himself on being the first in the office and the last out.Mark Zuckerberg of Facebook fame usually makes his first move at 6:00 am in the morning, gets ready, and goes straight to the office. According to http://www.sleepypeople.com website, earlier Mark was known for starting his day with very little sleep as his chatting with programmers used to go on till 6:00 am sometimes.

Mark Zuckerberg of Facebook fame usually makes his first move at 6:00 am in the morning, gets ready, and goes straight to the office.

The Co-Founder of Twitter, Jack Dorsey, gets up s at 5.30 am. He meditates and then jogs  for five miles.

Richard Branson arises by 5.45am, swims on his island early in the morning. After that, he goes to play tennis and then has a healthy breakfast.

Warren Buffett gets up in the morning by 6.45 am and reads six newspapers. But otherwise, he does not have any fixed schedule. He spends 80% of his time reading.  Sound’s like a bit of a slacker to me!!

More my style is Ratan Tata who attends the meetings of various companies of TATA Sons starting from 6 am, and in the weekends he either drives his cars or his own Falcon private jet early in the morning.   I’m still working on my Falcon though I do get petrol for my car on Sunday mornings at 6am as I like the peace and quiet. 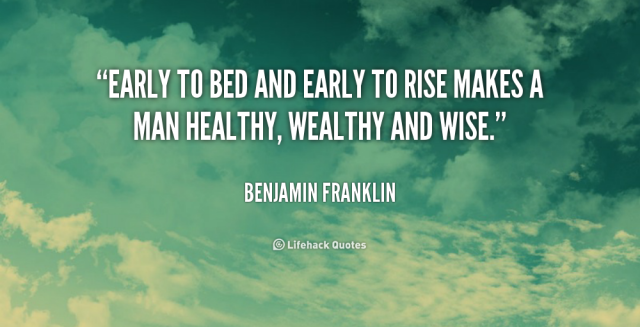 This famous quote is actually an update of some words of wisdom uttered by Aristotle so obviously the merits of getting up early have been known through the ages.

Mukesh Ambani who is the chairman of Reliance Industries wakes up between 5 and 5.30 am every morning. He works out in the gym located on the second floor of Antilia. This also includes swimming followed by reading a couple of newspapers.

Waking up with (or before) the sun, allows executives like General Motors’  Mary Barra and Pepsi’s Indra Nooyi to get a head start, knocking out tasks before the rest of the world has rolled out of bed.   That’s how I feel too.

Padmasree Warrior- CEO NextEV, U.S. is up at 4.30am and spends an hour on email, reading the news, and works out. And she is still in the office by 8.30 am at the latest, according to Yahoo Finance.  I just don’t have time to work out, too much work to do but maybe I should have a few more 4ams than 5ams.  No thanks, besides I can easily rack up 15 or 20 miles on my walking tours each day if I have a double slot.

It’s not just business people who are often up early.  Dedication to sport also requires many of the elite to get up before dawn.  In politics too, it seems that the cream or the early birds, rise to the top.

Barack Obama, the former president of the United States gets up around 6:30 am and does weight training and cardio in the gym. Later, he has breakfast with his family.  Well getting up so later, he will never amount to anything in my book 🙂  He needs to pull his finger out.

David Cameron,  former British Prime Minister starts his morning at 6 am. Until 8 am, he completes his important work of government business and consecutively has breakfast with his family. During this time, no one is allowed to switch on the television.

Back with the business crowd. Howard Schultz the CEO of Starbucks starts his day with a workout, which is usually a bike ride with his wife, but still gets to the office by 6 am.

Jeff Immelt- CEO,  GE gets up at 5:30 in the morning every day for a cardio workout, during which he reads the papers and watches CNBC, he told Fortune magazine. He claims to have worked 100 hour weeks for 24 straight years.  His dedication makes mine look pathetic but I’d say I work similar hour weeks most of the time for the last 4 years.

AOL CEO Tim Armstrong starts his day at 5:00 a.m.  The former Google executive  openly states that he’s “not a big sleeper” and wakes up at 5 a.m. or 5:15 a.m. every day to work out, read, tinker with the site, and hang out with his middle daughter, who is also an early riser.  Armstrong says he tries to hold off on sending emails until around 7:00 a.m.  He’s probably blogging like I am.  Hope you like the shout-out Mr. Armstrong!

It’s been reported that the CEO of General Motors, Dan Akerson,  will “rarely sleep past 4.30 or 5 am,” waking up so he can talk to GM Asia before it gets too late. He calls it the best job he’s ever had.   I feel that way too and we have the same time when we get up…. I need to open an office in Asia.

Fiat Chrysler CEO Sergio Marchionne wakes up at 3:30 a.m. to deal with the European market, according to a “60 Minutes” profile on his turnaround of Chrysler.

Referring to his schedule and work ethic, one exec is quoted as saying “Sergio invented an eighth day, and we work it.” “When it was a holiday in Italy he’d come to America to work. When it’s a holiday in America he goes to Italy to work.”   I feel like that sometimes, I’ve only had 4 days “off” all year and I still worked at least half the day on 3 of them.  I’m going to try not to work too much on Xmas day like last year though.

Vodafone CEO Vittorio Colao rises by 6 a.m According to The Guardian, he exercises then works to about 10:45 p.m., with a small gap for dinner with his family. He heads to bed by 11:30 p.m.

Bob Iger CEO of Disney told The New York Times that he gets up at 4.30 every morning. He takes the quiet time to do a number of things, claiming to read the papers, exercise, listen to music, look at email, and watch TV all at once. Even though it’s a quiet time, he’s “already multitasking.”

Bob Iger sounds like he has my sort of routine and that’s pretty much how I start my day. Do some reading, look at the news, wait for ‘Wake Up To Money’ to come on BBC Radio5 at 5.05am and then get on with some real work.

I’m not sure what it is that makes so many of the most successful leaders be early risers.  Maybe the extra time that they have really does help.  Or perhaps it is the same self-reliance and motivation that is required to get up and be productive when everyone else is in bed that makes them succeed in their chosen profession.  There are certainly many more I found that could be added to the list above.   Given that medical research shows that those who sleep 8 hours or more have a slightly shorter lifespan as well, I will try not to complain too much when I’m up at 5am tomorrow.  I’ll get 90 minutes work done before going out for a walking tour in London and catching the 6.01 or 6.20am bus…. but if you see me on it, you better not say hello.  It’s far too early for things like that!

I am a writer and traveller with a penchant for history and getting off the beaten track. With several books to my name including a #1 seller, I also write environmental, travel and history articles for magazines as well as freelance work. Recently I've appeared on BBC Radio and Bloomberg TV and am waiting on the filming of a ghost story on British TV. I run my own private UK tours company (Ye Olde England Tours) with small, private and totally customisable guided tours run by myself!
View all posts by Stephen Liddell →
This entry was posted in Life, Opinion and tagged business, Business Leaders, Early Risers, Entrepreneurs, Life, Motivation, Success, Successful people wake up early, writing, Ye Olde England Tours. Bookmark the permalink.

3 Responses to Waking up early for success