Last Sunday I had a trip on the Tube to old London town.  It started off relatively quiet until after two stops, a young and seemingly well dressed and respectable lady sat down on the seat behind me.  You could not hope for a seemingly more peaceful traveller until one stop down the line and a friend turns up.  From that moment on, there was 40 minutes of non-stop conversation which even followed me onto three different trains which was particularly annoying. 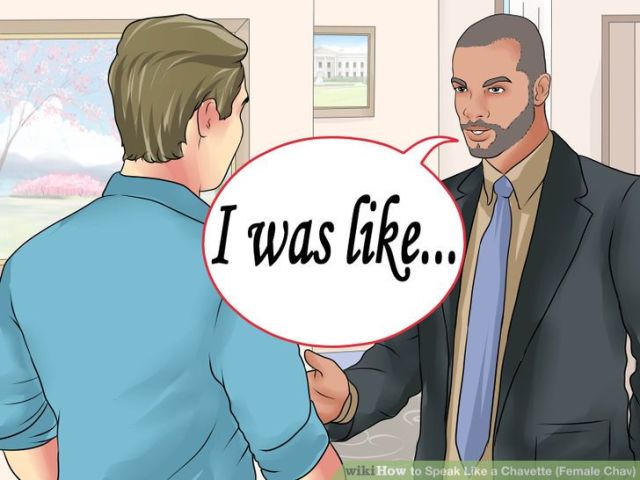 I’ve written before about rude people on the trains and indeed the recent doomed exercise to make strangers chat on the Tube.  On this occassion it wasn’t so much the banalt and pointlessness of the conversation but more the fact that she kept using the word ‘like’ several times a sentence and never in the correct manner. 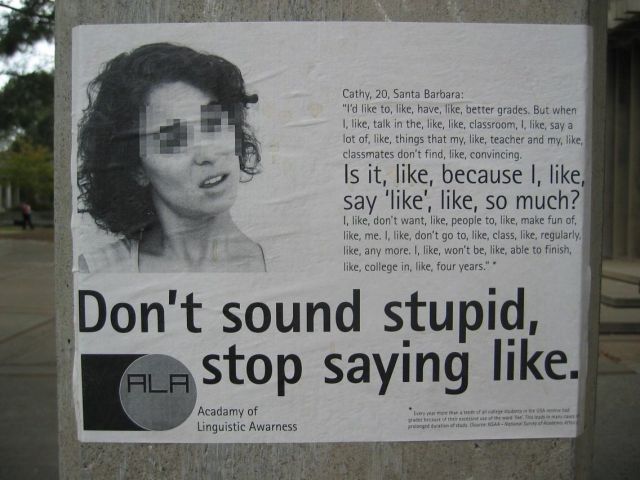 It wasn’t long before half the carriage were stealing quick glances at the lady or sniggering away.  It didn’t matter if they were students, people my age or retired folk, the one thing that was really getting on our nerves was the overuse of ‘like’.

It was non-stop and I felt sorry for the friend who she was balthering on to as she never said a word and I’m sure was aware of what was going on.  I felt sorry fo everyone else too who was subject to the tirade.  She could have saved so much energy if she had only cut out the use of her redundant ‘likes’.

I wondered why someone might appear so respectable in every other way and yet not be aware that they sounded worse than illiterate.

The options are like almost limitless and it would be so easy to get out of the annoying habit.  I’m not one for judging people when they have no option or alternative but no matter who you are, it doesn’t take a genius to know how to speak in a vaguely coherent manner.  I really do think that using Like as a filler word makes people appear stupid and I know that many others do too.

There is a theory though that speaking in this way could even be a sign of intelligence.   Those who frequently use the ‘discourse marker’ may be simply taking time to think about what they are saying.  The theory comes from US researchers who analysed recordings made of more than 200 men and women as they took part in conversations in their everyday lives.

The team, from the University of Texas, looked at how often the volunteers used the word ‘like’.  They also counted up mentions of ‘I mean’ and ‘you know’.  So called filled pauses – ‘ums’ and ‘uhs’ were also totted up and the results compared with information about the volunteers’ personalities.

Despite frequent use of ‘like’ often being seen as a sign of empty-headedness, the word was a particular favourite of conscientious types though the researchers admit this could be a rogue result. Assuming it is reliable, it may be that ‘like’, as well as ‘I mean’ and ‘you know’ are signs of more considered speech.

I’m like I can’t believe this has much veracity.  Surely it is more laziness or a bad habit.  As someone who hates speaking and is shy and not entirely stupid, I’d suggest that instead of saying ‘like’ all the time, if someone needs time to think then perhaps just speak a little slower and more considered then their brain might catch up with their mouth.  Maybe the one-sided conversation would have been over in half the time too.

I am a writer and traveller with a penchant for history and getting off the beaten track. With several books to my name including a #1 seller, I also write environmental, travel and history articles for magazines as well as freelance work. Recently I've appeared on BBC Radio and Bloomberg TV and am waiting on the filming of a ghost story on British TV. I run my own private UK tours company (Ye Olde England Tours) with small, private and totally customisable guided tours run by myself!
View all posts by Stephen Liddell →
This entry was posted in Funny & Humour, Life, Opinion and tagged Chav, English, Funny, Language, Life, London, London Underground, Slang, The Tube. Bookmark the permalink.