The name of Khutulun might not mean much to people today in the Western world but in an age when there is still much debate about the equality of sexes, gender roles and stereotypes, we really all should be a little bit more aware of.

Living between around 1260AD – 1306AD and niece of the feared Kublai Khan and descendant of the legendary Ghengis Khan, given the name of ‘Moonlight’ in her native tongue, her character and reputation share little with such a poetic name.

The Tanga or seal of Kaidu Khan, the House of Ogedei

Daughter of the prominent Central Asian Khan, Kaidu, who rule from Mongolia to the great river Oxus and down to the borders of India, her feisty reputation gained the attention of renowned Persian writer Rashid Al-Din and the more familiar in the West at least, Marco Polo.

The Mongol Empire was a tough old place.  Though fighting and hunting were overwhelmingly a male preserve, the Mongol women were a very tough breed as indeed were the children, many of whom didn’t learn to walk for a year or two having spent their early years on horseback and drinking the rich blood of their horses rather than take time to de-camp and take things easy.

Even amongst this environment, Khutulun was made of something special.  She was a large and powerfully built woman, and she used her size and strength in the three Mongol sports of horsemanship, archery, and wrestling, as well as in the primary Mongol vocation of warfare.

Khutulun was unusual, but not unique. Mongol women rode horses as skillfully as men, often carried a bow and wore a quiver, and they repeatedly appeared in early reports as fighting alongside men. The ability of women to fight successfully in steppe society when they failed to do so in most sedentary civilizations derived, however, from the unique confluence of the horse with the bow and arrow. In armies that relied on infantry and heavy weapons such as swords, lances, pikes, or clubs, men enjoyed major physical advantages over women.

Mounted on a horse and armed with a bow and arrows, a trained woman could hold her own against men in battle. Women generally fared better in archery combat than in hand-to-hand combat. Although archery requires strength, muscular training and discipline prove to be more important than brute force. An archer, no matter how strong, can never substitute mere might for skill in shooting. By contrast, good swordsmanship requires training and practice, but a sufficiently strong person wielding a sword can inflict lethal damage without prior experience. Like their Asian cousins the Turks and Huns, it was the Mongol use of archery and particularly the mastery of horse bases warfare that allowed them to conquer most of the known world.

Khutulun depicted in a recent Marco Polo production by Netflix.  Personally, she looks far too slight and westernised to be a real Mongol wrestling princess.

Because archery depended so much on training, the ability of women to use arrows effectively in war depended upon their developing their skills as young girls. In the pastoral tribes, both boys and girls needed to use the bow and arrow to protect their herds. The boys would take the larger animals, such as camels and cows, farther away to graze, while girls stayed closer to home with the sheep and goats. Since wolves would more likely attack a sheep or goat than a camel or cow, the girls had to be able to defend their animals.

Mongolian wrestlers were not paired by size or weight, and the rounds had neither spatial no temporal limits. The two opponents grabbed the other’s arms or waist until one forced the other to the ground. If any part of the body touched the ground, no matter how briefly, that contestant lost. Smaller or less skilled wrestlers might be thrown in a few seconds, but evenly matched wrestlers sometimes locked their arms around each other and pushed other back and forth like two bull elephants for as long as necessary until one competitor dropped.

Khutulun grew up with fourteen brothers and seemingly learned from an early age how to confront and beat them. As she grew older, Khutulun joined the public competitions and acquired great fame as the wrestler whom no man could throw. She became ever richer by winning horses from defeated opponents, and eventually her herd of ten thousand rivaled and even surpasses those of the herds of the great Khans.

Among the Mongols, athletic victory carried a strongly sacred essence, and the champion was considered to be blessed by the spirits. Therefore, Khutulun’s athletic triumphs made her the ideal companion for her father in battle.  She was such an accomplished warrior that her father would take her out on military campaigns.  Marco Polo said of her that she was so formidable that she could ride into the midst of battle and snatch a captive as easily as a hawk might grab a chicken. Her presence, mounted next to him on the battlefield, extended her reputation for past athletic victories into an implied guarantee of dominance on the battlefield. Throughout their lives, the two constantly defied the efforts of their powerful relation Khubilai Khan to rule over the tribes of the steppes of western Mongolia and Kazakhstan and over the mountainous regions of western China and Kyrgyzstan. They resisted every army sent against them and kept their homeland permanent free of rule by his Yuan Dynasty.

Due to her royal bloodline and her fast growing reputation, Khutulun became the object of desire for many men.  Sadly for them, Khutulun refused to marry any man who was physically inferior to her.  To win her hand in marriage, Khutulun would publically wrestle her suitors for horses, typically around 10 but sometimes as high as 100 but always she came out the winner. 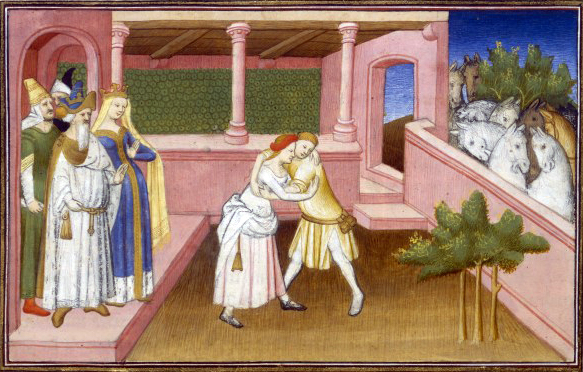 Khutulan wrestling a would-be husband in a very westernised painting.

It is recorded that her parents pleaded with Khutulun to marry but she refused.  One time is said that Khutulun went into the match under great pressure from her father to deliberately lose when a man challenged her with the prize of 1,000 horses. Reluctantly, Khutulun agreed and when the fight started for she was genuinely surprised at the strength and quality of her opponent and for a long time it looked like Khutulun was indeed going to lose after a long-drawn-out bout but when the crunch came, Khutulun was just too competitive and with all her might managed to throw her gallant challenger to the ground.  Humiliated, he was never seen again and Khutulun lost the most worthy husband thus far.

This went on for many years and by the time Khutulan was in her mid-twenties she had over 10,000 horses of her own.  This was an enormous wealth, much greater than many Khans in the empire.  In a society where many girls were betrothed well before their teenage years, not being married by the age of 20 was unheard of, especially for such a prominent figure in society.

Khutulun’s colourful and unusual public life without a husband provoked much speculative gossip not only in her father’s kingdom, but also among chroniclers and envoys of the adjacent Muslim territories. Her political and military enemies who had not been able to defeat her on the battlefield alleged that she maintained an incestuous relationship with her father and thus would take no other man while he lived. Realizing the price her father paid for such malicious propaganda, Khutulun chose a man from among her father’s followers and married him without wrestling him. He was her husband, but he was the man of her choice.

Khutulun consistently outperformed her many brothers, on the wrestling field as well as the battlefield. While Kaidu Khan’s other children assisted him as best they could, he increasingly relied on Khutulun for advice as well as for political support. She was unmistakably his favorite child, and according to some accounts, he attempted to name her to be the next khan before his death in 1301.

Unfortunately, her many brothers combined against her and so Khutulun became the head of the military, still the most powerful role of any women anywhere in the world but perhaps less so than she deserved.  On the other hand, Khutulun was very much a traditionalist and she always believed the Mongols should stay tough and adhere to their old martial qualities and not become soft sedentary people and so taking control of the military might have been just what she was wanting.

Just 5 years later, in 1306, Khutulun was found dead under mysterious circumstances which led to numerous tales of how she was bumped off.

It is interesting that even today we can see the difference in Western and Mongolian culture.  In the West, where Khutulun is remembered at all, it is in tales of a prideful woman who finally succumbed to love in tales and operas of the 18th to early 20th century.  However in Mongolia, her memory has been preserved with honour as a great woman athlete and warrior whose achievements are still remembered today in the open vest and the victory dance of the warrior. Every time a wrestler dresses for a match and every time he dances in victory like a bird, they honour the achievements of the greatest female wrestler in Mongolian history. Both the wrestling rituals in Mongolia and the diva on the opera stage preserve two aspects of the life of one of history’s greatest female athletes.

If you’re interested in learning more about The Mongols at their deviously fiendish worse then why not check out my book 101 Most Horrible Tortures in History.  Or if you’d like to immerse yourself in life on the Mongol Steppe, then might I point in the direction of my Timeless Trilogy starting with book 1, The Promise.

The Promise – Book 1 of The Timeless Trilogy

I am a writer and traveller with a penchant for history and getting off the beaten track. With several books to my name including several #1 sellers. I also write environmental, travel and history articles for magazines as well as freelance work. I run my private tours company with one tour stated by the leading travel website as being with the #1 authentic London Experience. Recently I've appeared on BBC Radio and Bloomberg TV and am waiting on the filming of a ghost story on British TV. I run my own private UK tours company (Ye Olde England Tours) with small, private and totally customisable guided tours run by myself!
View all posts by Stephen Liddell →
This entry was posted in Culture, history and tagged 101 Most Horrible Tortures In History, history, Khutulun, Kindle, Mongolia, The Mongols, The Promise, war, Wrestling. Bookmark the permalink.