Some of you might actually wonder what I do when I am not blogging or writing some book or other.  Well, I actually give private guided tours to individuals, families and groups from around the world.  My tours generally are one of three types.

I have around 25 country tour destinations and some of them can allow for two or even three in a day.  As we go by car and at the speed of the guest it allows for a totally personalised and unrushed tour and we get to visit places that most tourists can’t get to and see places that even many British aren’t aware of.

Some places are large country houses or palaces, others ancient abbeys and cathedrals.  Many are in unspoilt and beautiful rural locations while others might be in towns and cities such as Oxford, Portsmouth, Salisbury and Stratford Upon Avon.

2.  Multi-Day Tours.  These tours are possibly my favourite as they minimise time spent driving into and out of London, which for me, at least, can be a pain when I have to do it four times in a day.   It also means that we can visit places out of range of day-trips and as generally speaking the scenery gets much nicer the further away from London and often the venues more interesting and quieter, it is something tourists enjoy too.

I quite like the planning aspect of arranging tours.  Working out the best way to travel round the country and fit everything in.  Learning new short-cuts and re-visiting beautiful places that I would never get to see in my normal daily life.  I know where many of the best ice-creams, cafes and pubs can be found across England and have never yet got lost.

My longest tour so far was about ten days and that took us around 1200 miles and we stayed in castles, by the seaside, in forests hotels.  All fantastic places.  I also do WW1 themed tours to France and Belgium to visit trenches, battlefields and places of interest.  So many places I go to feel like home and I actually drive into distant cities much more often than I go to my own home town.

It is quite complicated though and in general, it takes around half a day of planning for each day out and I try to limit my tours so that each one is special and I am fully refreshed so I can go the extra mile for my tourists.  One of the things that really sets me apart from large tour organisations.  I have the 5-star reviews on Trip Advisor and other places to show for it.

3. The final type of tour I offer are Walking Tours in London.  Here the tourist picks a theme and we go off and explore and I give them an insight as to what they are seeing and the history of the place.  Some tours are straight tourist tours; others are of Cathedrals, districts of London, West End shopping or London markets… even showbiz related tours such as Sherlock or James Bond.

I really enjoy Walking Tours as it is the best way to see London and I like to entertain my guests.  Finding out what they like and their personalities are means there is always something different to talk about and I love to make their day, the best day possible.  In fact, I often get told in person or by a review that I am the best tour-guide they ever had or that their day with me was the best day of their holiday or even any holiday.  Two or three times I have even been told I have made someone’s lifetime dream or ambition.  What a lovely thing to be told!

Most people book direct with me but others feel safer to book through well-known international booking agencies though sadly they often get charged a serious surcharge for the privilege.

I don’t advertise my tours in any way but instead by linking them to my blog, they nearly always rank at the top of Google.  It’s great that my writing and fresh content also puts my tours above the listings of wealthy corporations.  AND I pay all my tax unlike many of them!

Today I am unveiling a new Walking Tour in London.  The theme of this tour is Music.  So many people ask me on tours if I could take them to certain locations such as Abbey Road for The Beatles that I thought it would be a great idea for a dedicated Music tour.  It definitely takes people to parts of London rarely visited by tourists but also, every location is closely related to some of the most iconic stars of the 20th and 21st centuries.

You can read about my new tour here… so that’s what I’ve done today, how about you?

If you or anyone you know is coming to the U.K. do let them know about me.  You can see my tours from the top menu above or at the dedicated website www.yeoldeenglandtours.co.uk

No world city has such a great musical legacy as London.  From the swinging sixties through the 70’s and 80’s era’s of Rock and then Punk to the 90’s Britpop and Millenial Cool Britannia, London is almost the centre of the music world.

This special tour will take us to iconic locations with close connections to some of the biggest stars the world has ever known.   We’ll visit the places where bands played their first gigs, where others got their big breaks.   From inspirations for famous songs to where singers lived and where others are now permanently memorialised. 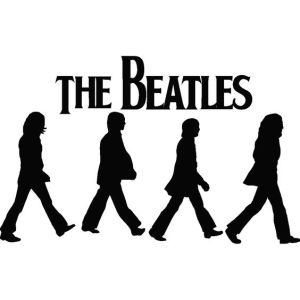 Whether you love music or simply want to see a different side of London, this tour is for you with music and stars from across the decades.

We’ll start off by visiting the statue dedicated to the late Amy Winehouse before heading to Abbey Roads to visit the studios made famous around the world by The Beatles and have your photo taken on that road-crossing, you know it has to be done!

See the spot where Amy Winehouse is immortalised

Then to Waterloo to visit the very spot that inspired The Kinks to write their hit Waterloo Sunset before visiting the shrine to David Bowie in Brixton.

Pay hommage at the shrine of David Bowie

We head next to the cafe where a very young Bob Dylan became a hit and where Rolling Stone drummer Charlie Watts got a lucky break.  Nearby is Kensington Park, the inspiration for Blur’s epic 90’s hit ‘Park Life’.

Visit the spot where the Stones were discovered

Talking of The Rolling Stones, we’ll head off to China Town and visit the scene where they were first discovered.  From here we’ll walk through bohemian Soho and follow in the footsteps of Elton John, Paul Simon, The Sex Pistols and of course, Jimi Hendrix. 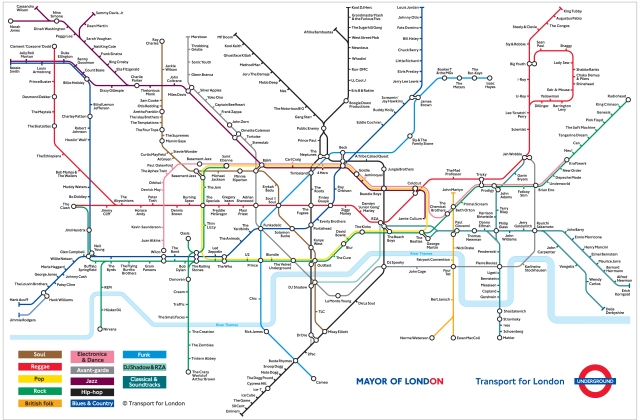 London Underground Map showing how different groups and bands link to each other.

I am a writer and traveller with a penchant for history and getting off the beaten track. With several books to my name including a #1 seller, I also write environmental, travel and history articles for magazines as well as freelance work. Recently I've appeared on BBC Radio and Bloomberg TV and am waiting on the filming of a ghost story on British TV. I run my own private UK tours company (Ye Olde England Tours) with small, private and totally customisable guided tours run by myself!
View all posts by Stephen Liddell →
This entry was posted in Life, London, Travel, Ye Olde England Tours and tagged Brit pop, Cool Britannia, David Bowie, Guided Tours, London, Music, The Beatles Abbey Road, Tours, Travel, vacation, Vacations, walking tours, Ye Olde England Tours. Bookmark the permalink.

2 Responses to Music of London Rock and Pop Tour