The Worriers Guide To Life

One of the most popular posts I ever wrote was a study of what it is like to be an Introvert.  A few days ago I came across a newspaper article about a collection of cartoons by a talented artist by the name of Gemma Correll.  Gemma has put together The Worriers Guide To Life which will appeal to many people, particularly those of the introverted nature.

A lot of her illustrations make me laugh and I can related to nearly all of them.  I’ve always been the same way, you can see what I was like just over 42 years ago…. 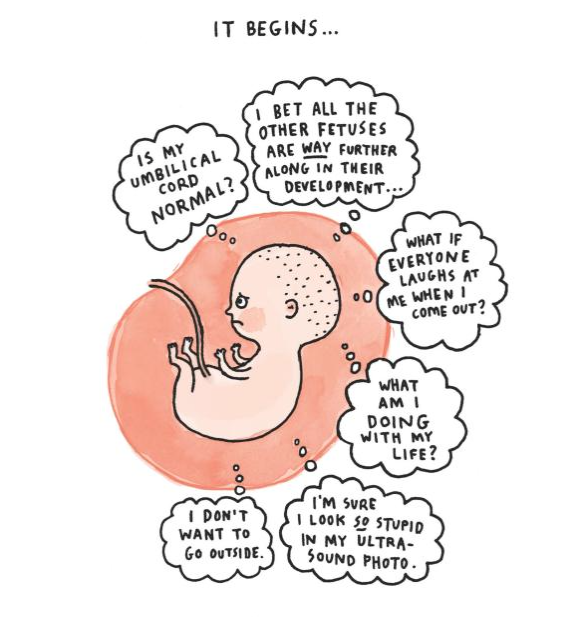 One of the signs of being an introvert is that you just don’t want people to be able to get hold of you very much.  It doesn’t particularly mean you are anti-social it’s just that you can get by very well on your own… in the old days self-reliance was about the best quality one could have.  These days in the interconnected world, we are all meant to love being at the beck and call of the entire world. 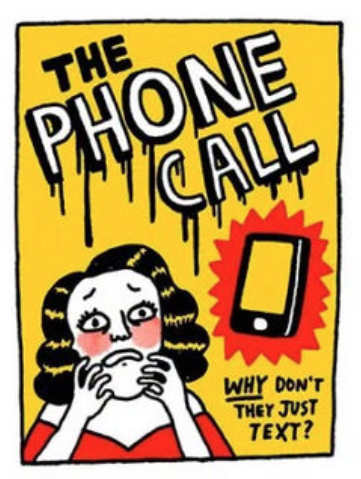 I love the cartoon above.  I hate the telephone.  I used to work in an office where someone else also hate the phone and we’d both wait to the others left the room to call anyone.  Now I work from home and I don’t think I’ve initiated a call for 3 or 4 years.   Once or twice I’ve had to return a missed call but that’s about it.

Look at my phone below.  This photo tells you a lot.  Firstly that it is switched off.  Secondly that it is from the turn of the millennia.  Actually that’s not strictly true as my millennia phone got damaged in a bus crash in Malta in 2011.  However, I got issued a like-for-like free replacement.

Can’t live without a smart phone, worried someone might try and get hold of you but can’t?  Couldn’t care less says I.  I remember when these phones first came out… they were marketed as not to use regularly or even have switched on but to have them in case of an emergency.    My phone does everything required of it, it sends and receives text messages.  It also just about sends and receives calls, well it receives them if for some reason I’ve checked my voicemail and forgotten to switch it back off.

Oh my, who needs Unexpected Guests?  Maybe some people might like that sort of thing but my thoughts would firstly be why would anyone do that to me and secondly, why wouldn’t they polite enough to call me so I could avoid their house-call more easily.

Of course, just because the doorbell rings, it doesn’t mean one has to answer the door.  That would be a beginners error.  I can’t tell you how many times my wife and I have hidden in the kitchen, under the stairs, beneath the dining table.  Depending where we are, or even what if anything is being worn we might camouflage ourselves on the carpet or behind a door frame.

Yes we like to see people but properly arranged.  Calling around unannounced means risks have to be taken like peeking through the net curtains from upstairs… do we turn the volume down on the tv or radio so they can’t hear us but what happens if they heard the tv and then realise we switched it off?   That is what unannounced guests do to the place.  The worst of course is when you are legitimately expecting someone and then by a fluke, someone else appears minutes beforehand.  That risks total stranger exposure.

It’s not myself who is like that.  One of the funniest things I remember is one time some unannounced guests were just popping by and my wife wanted to get some peace and quiet and so went up to have a shower.  After 20 minutes I thought something was fishy as my super hearing realised that the sound of the shower water I could hear from out in the garden was consistent and not in any way varying.  I went upstairs and found my wife sitting on the toilet, reading with the shower on.   I thought that was ingenious and didn’t let on at all, my wife enjoyed another good 20 minutes in the shower and came down strangely with very dry hair.

I used to get the above quite a lot too.   If someone is laughing, looking in your direction or whispering to someone else then naturally I am the focus of attention… as I’m that good apparently. 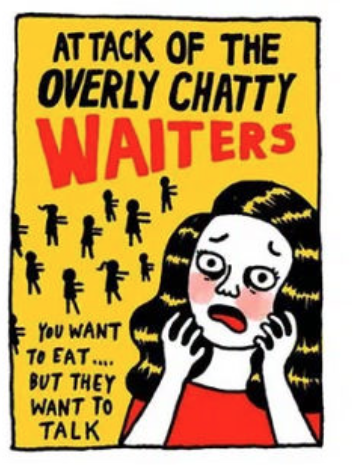 I am in two minds about the cartoon above.  On the one hand there is nothing worse than someone trying to make conversation when you just want to get on with the job at hand, whether that be packing your shopping at the supermarket or simply wanting to eat and get on with the meal… that thing we came all the way from our home to do.   But, I always try and make an effort and be friendly to those who have people-facing jobs as I know just how horrid many people can be.    When people ask me how I am, they don’t really want to know.  They are just being polite and when I reply everything is just fine when inside I’m anything but.

Personally I think it all started going wrong in the early 1990’s.  This is when BBC weathermen (and women) began trying to get a personality, be friendly, maybe even try and link the last item in the news to the weather.  “That radical new hair dryer looks blowy and just by chance northern England’s got some gales to look forward to tonight”.  I don’t care, the news is the news and the weather is the weather.  Stop trying to ingratiate yourself with the news people and the audience.   That goes double to sports reporters.   Ever since the weather people thought they should be our friends, the whole country has decided to become friendly, well it’s not British and it’s not right.  I’d go and live in America or Italy if I wanted that level of service.

And after all the times people have asked if the food is ok, have I ever said that it isn’t?  Of course I haven’t, I’m English.  I’m not going to make a scene.  That food can be freezing cold, burnt at the edges or entirely different from what I ordered but I’d rather eat it than say “excuse me”. You can read more of that dilemma with I’m Sorry I’m British.

For the cartoon above, I’m actually quite like that for my books and for my tours.  Why would people like my tours?  Why do they give me 5-star reviews?   Are they mad!?!

Of course one of the answers is to recognise and reward yourself for achieving little goals through the day or the year.

Yes I did!  I filed them in June, 7 months before the deadline and today payed what I had to pay.  Can you believe I sell so many books and tours I have to pay tax on them?  That’s like verging on being successful… totally uncalled if you ask me.

Ok, that badge is for me tomorrow.  A nice gluten free chocolate brownie for doing all the washing and cleaning after the Airbnb guests check out… I’ll be working on publishing my new book too, V1 Vixen – A Vigilante Pulp Thriller.  Click on the image  below for more details!

I am a writer and traveller with a penchant for history and getting off the beaten track. With several books to my name including several #1 sellers. I also write environmental, travel and history articles for magazines as well as freelance work. I run my private tours company with one tour stated by the leading travel website as being with the #1 authentic London Experience. Recently I've appeared on BBC Radio and Bloomberg TV and am waiting on the filming of a ghost story on British TV. I run my own private UK tours company (Ye Olde England Tours) with small, private and totally customisable guided tours run by myself!
View all posts by Stephen Liddell →
This entry was posted in Life and tagged British, Cartoons, Extroverts, Funny, Humour, Introverts, Life, Opinion, Personality, Shy. Bookmark the permalink.

13 Responses to The Worriers Guide To Life