The British Schindler Sir Nicholas Winton and the Kindertransport

Not many people have heard of Sir Nicholas Winton even in his own country but his actions undoubtedly mean that thousands of people are alive today that would not have been without him. The Kindertransport has its origins on 15th November 1938, just five nights after the terrible events of Kristalnacht and a series of violent and systematic attacks against Jewish shops and businesses in Germany.  A delegation of mostly Jewish and Quaker community leaders appealed for help from Neville Chamberlain the British Prime Minister of the day. 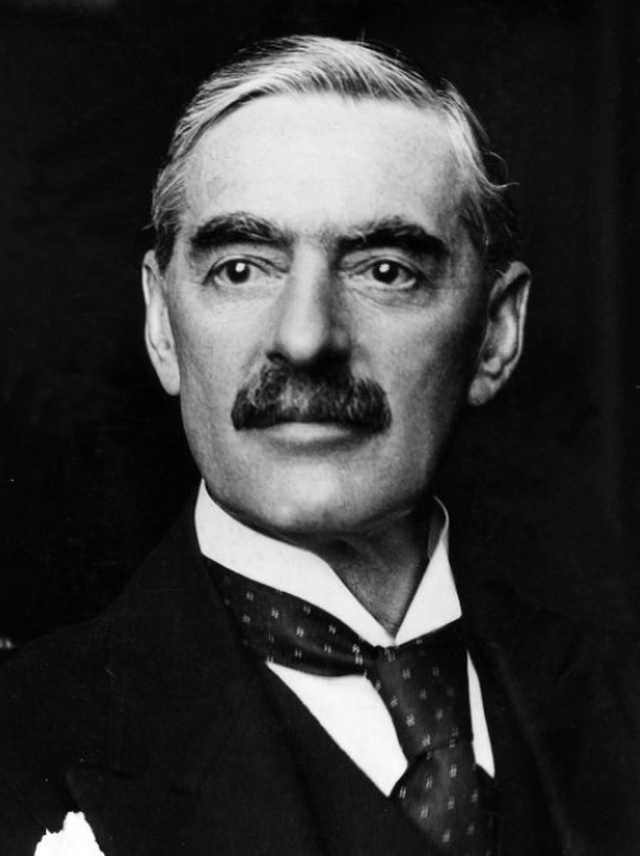 The Cabinet put together a Bill and the very next day it was debated in Parliament with the decision made to house up 15,000 mostly Jewish children from Germany and Austria to Britain on the provision that the newly created organisation The Movement for the Care of Children from Germany could find homes for them and that each child had £50 to their eventual allocation (something which generally did not happen). An appeal on BBC Home Service (now BBC Radio 4) led to 500 offers from British civilians ready and willing to immediately house German-Jewish children and a team of inspectors was sent to check that the homes were clean and the people of good character though no effort was made to question their motives and participants were not generally Jewish.

A network of volunteers was set up in Germany to arrange for the transport of the most vulnerable children, many teenagers, who were either already interned or destined to be sent to concentration camps, Jewish orphans or those from destitute families.  The children could only bring a small bag of belongings with them and many had nothing at all when less than 3 weeks later the first boat of 200 children arrived at Harwich Port. In the next nine months around 10,000 Jewish children were transported to Great Britain, similar Kindertransports were set up by volunteers in some other European nations but of course sadly they were quickly overrun by Nazi armies which rather negated their brave efforts.   A smaller but less organised system was set up by volunteers in the USA but due to the tight regulations placed on them by the government, most of the 1,000 children in the scheme were not permitted into the country even temporarily. Most children travelled by train from cities such as Berlin and Vienna though a few escaped by plane.  The last group fled Germany on 1st September 1939, the very day that Germany attacked Poland.  Two days later Britain and France declared war on Germany and Germany closed its borders and escape routes to the U.K. 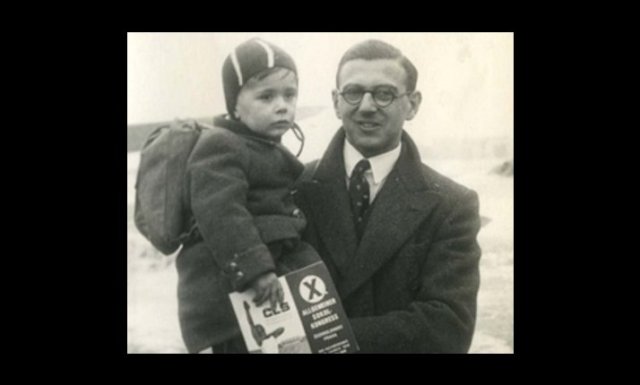 Sir Nicholas Winton with a Jewish child refugee who he helped escape from the Nazis.

The 10th May 1940 saw the Netherlands under attack from 750,000 German forces and with chaos all round, the organiser Geertruida Wijsmuller took it upon herself to arrange the escape of children without even consulting their parents, something which incredibly (yet understandably) many were not happy with and on the 14th May 1940, the very last transport escaped from the Netherlands when 74 children were placed on the freighter Bodegraven at Ijmuiden.   The ship and its precious cargo made it to Liverpool a few days later.    Mrs Wijsmuller was scheduled to also join the ship but opted to stay behind to help with aid distribution.  She was briefly arrested by the Gestapo on the suspicion of plotting to help a dozen children flee to Switzerland but they could not find even the minimal proof that they required and as Geetruida kept her nerve and silence, was released and went on to live a full life into the 1970’s. The 15th of May saw Germany complete its occupation of the Netherlands and its borders were closed until its liberation many years later. After the war many children were able to re-unite with their families either in Europe or indeed for others around the world.  Many opted to stay in Britain and others looked for their family only to find their parents had been murdered by the Nazis. One of the many great unsung heroes of the Kindertransport is Sir Nicholas Winton.  I very nearly wrote ‘was’ but happily Sir Nicholas is still with us at the age of 106! 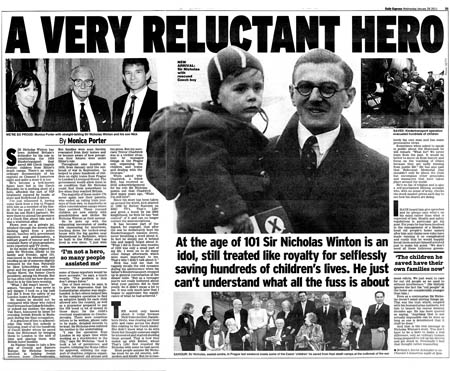 A Christian, born to German Jewish parents in 1909 in London, he became both a banker and a socialist who came to know many senior figures in the Labour Party and at an early stage became a critic of the Appeasement policy and just before Christmas 1938, rather than go skiing in the Swiss Alps instead travelled to Prague and single-handedly created an organisation to to arrange and oversee the transport of Jewish children.  Working from his hotel room he arranged the escape of 669 children from Prague by train across Europe to England. Ironically one of the biggest obstacles was the German border with the Netherlands as the Dutch were turning away any Jewish refugees even as a Synagogue could be seen burning just a few miles over the German border.

Sir Nicholas though put his influence and friendship with senior British officials to good use and somehow got his children through.  Winton and his mother spent months looking for homes for these children whose parents were largely destined to die at Auschwitz.  Sadly a further transport of 250 children were intercepted by the Germans on the 1st September as war erupted. Back home in the U.K. Sir Nicholas initially became a Conscientious Objector but later joined the RAF where he would have a successful career both in WW2 and afterwards as well as working for refugee and reconstruction organisations through which he met his wife, Greta.

Sir Nicholas kept his traditional stiff upper lip and told no-one of his role in saving so many lives until in 1988 his wife found documentation up in the loft which included the names and addresses of the children and their families he had helped.  Unknown to him, he attended the BBC show ‘That’s Life’ and his notes were shown live on television.  When the host asked if anyone present had been helped by Sir Nicholas to his surprise dozens of people stood up.

Map showing the route of the Winton Trains

Sir Nicholas freely acknowledges that others include Trevor Chadwick did some of the more dangerous aspects mission and that he never set foot in Prague train station despite the statue there which was recently unveiled with him and a young Jewish child. On his 100th birthday, he flew in a microlight aircraft piloted by the daughter of one those whose lives he had saved.

Despite his low profile, Sir Nicholas has been widely honoured. In the 1983 Queen’s Birthday Honours, Winton was appointed Member of the Order of the British Empire (MBE) for his work in establishing the Abbeyfield homes for the elderly in Britain, and in the 2002 New Year Honours, he was knighted in recognition of his work on the Czech Kindertransport. He met the Queen again during her state visit to Bratislava, Slovakia, in October 2008.

In 2003, Winton received the Pride of Britain Award for Lifetime Achievement.Winton was awarded Order of Tomáš Garrigue Masaryk, Fourth Class, by the Czech President in 1998. In 2008, he was honoured by the Czech government in several ways. An elementary school in Kunžak is named after him, and he was awarded the Cross of Merit of the Minister of Defence, Grade I.[36] The Czech government nominated him for the 2008 Nobel Peace Prize. The minor planet 19384 Winton was named in his honour by Czech astronomers Jana Tichá and Miloš Tichý. A statue of Winton is on Platform 1 of the Praha hlavní nádraží railway station. It depicts Winton holding a child and standing next to another one. Created by Flor Kent, it was unveiled on 1 September 2009 as part of a larger commemoration of the 70th anniversary of the last Kindertransport train 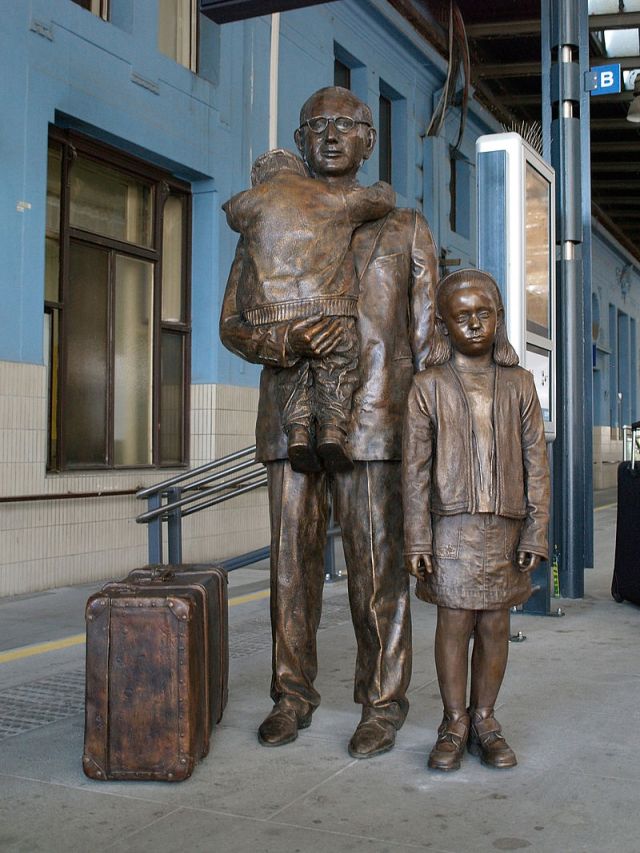 There are also three memorials at Liverpool Street Station in London, where the Kindertransports arrived as well as several other statues elsewhere. Winton was baptised as a Christian by his parents, but his Jewish ancestry disqualified him from being declared a Righteous Among the Nations by Israel.

In 2010, Winton was named a British Hero of the Holocaust by the British Government. On 1 September 2009 a special “Winton Train” set off from Prague. The train, comprising an original locomotive and carriages used in the 1930s, headed to London via the original Kindertransport route. On board were several surviving “Winton children” and their descendants, who were welcomed by Winton in London along with other survivors who were too frail to travel on the train itself. It is estimated that the descendants of those saved by Sir Nicholas now number over 5,000 people.  As Sir Nicholas has said, you don’t have to be a hero to make a difference in life but simply an ordinary person who gets stuck in.

‘Anything that is not actually impossible, can be done, as long as one is determined that it shall be done.’

Amongst his most recent honours, Sir Nicholas Winton was awarded the Freedom of the City of London on 23 February 2015. 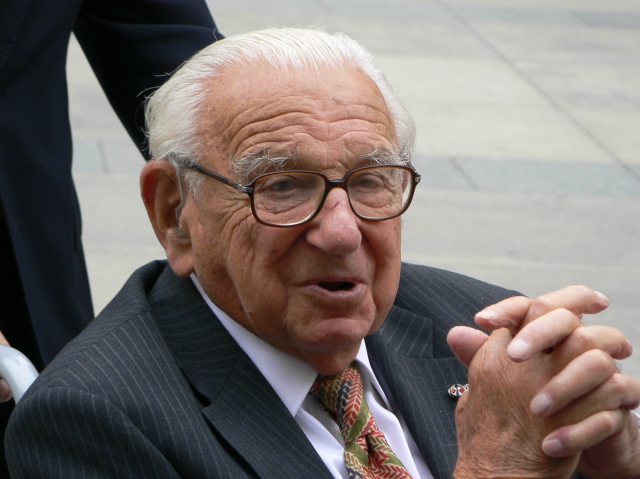 I am a writer and traveller with a penchant for history and getting off the beaten track. With several books to my name including several #1 sellers. I also write environmental, travel and history articles for magazines as well as freelance work. I run my private tours company with one tour stated by the leading travel website as being with the #1 authentic London Experience. Recently I've appeared on BBC Radio and Bloomberg TV and am waiting on the filming of a ghost story on British TV. I run my own private UK tours company (Ye Olde England Tours) with small, private and totally customisable guided tours run by myself!
View all posts by Stephen Liddell →
This entry was posted in history, Life, WW2 and tagged BBC, charity, Geertruida Wijsmuller, history, Jewish, Kindertransport, Life, refugees, Sir Nicholas Winton, Trains, UK Politics, war, WW2. Bookmark the permalink.