This is a small bonus post as I have two more serious posts coming up and I wanted to lighten the mood… before it had already got soured! Some of you may remember that in February I wrote a post on Leonard Nimoy and I mentioned how I had met him several times and was the very proud owner of an autograph and photo.

I delayed writing that post for quite a few days and reading it, it might have become apparent that I really should have posted a relevant photo or two.  Really I should have, indeed I would have if only I could find the photos.  You see I treasured them so greatly that I had hidden them away and when I wrote my blog I wasn’t able to find them.  In fact I wasn’t able to find them for 6 weeks and then like so many other things, they appeared when I wasn’t even looking for them along with many other autographs which are not stored with my main collection.

So it is a little late but I thought I should display them here.  I have a few Spock autographs and indeed a signed biography but this is the only photo I saw him sign in person. 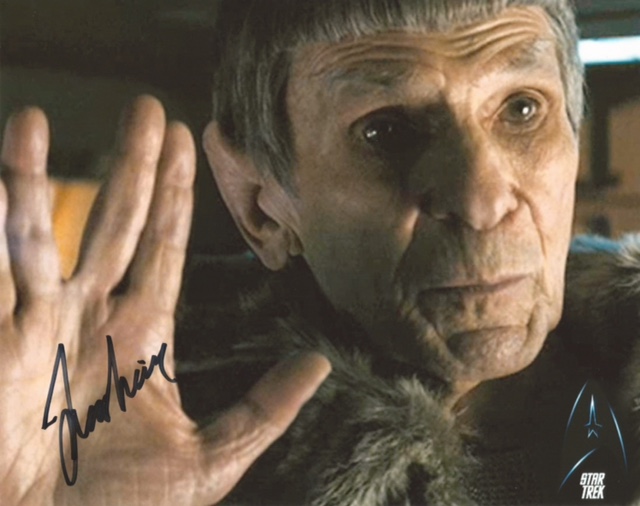 Live Long and Prosper from the movie Star Trek.

Then below is my other pride and joy from a very cold and wet Collectormania at Milton Keynes.  That smile is the culmination of 38 years geeking out at or should that be Grokking Spock.

Me and Grandpa Nimoy!

I still remember what a thrill it was and how there was absolutely no pressure to get the once in a life-time photo right but somehow Mr. Nimoy handled it well, kept it together and we got a good photo out of it!

Actually if you think just how wealthy Leonard Nimoy was and given his age, how many people would fly half way round the world to stand outside in a very wet and cold football stadium.  No matter if he made some money from the autographs it could only be a pittance compared to everything else, he could only have come back to the UK one last time to say ‘hi and bye’ to his fans.  He was very kind and gracious and had a rather bony back.

I got the flu two days later, no doubt due to the conditions and was even the first person in the local hospital as a suspected Bird Flu sufferer during those few weeks when the whole world was going to die in an Avian Flu pandemic.  I didn’t have Bird Flu and even if I did, it would still have been worthwhile.  It’s not every day you get to meet one of your heroes and too many modern-day stars hide behind security or treat their fans with contempt.  50 years later and long after Leonard Nimoy owed anyone anything, he was still giving his time to charity and the people who loved him.

I am a writer and traveller with a penchant for history and getting off the beaten track. With several books to my name including several #1 sellers. I also write environmental, travel and history articles for magazines as well as freelance work. I run my private tours company with one tour stated by the leading travel website as being with the #1 authentic London Experience. Recently I've appeared on BBC Radio and Bloomberg TV and am waiting on the filming of a ghost story on British TV. I run my own private UK tours company (Ye Olde England Tours) with small, private and totally customisable guided tours run by myself!
View all posts by Stephen Liddell →
This entry was posted in Life, Movies and Films, Popular Culture, television and tagged Art, Autographs, Collectormania, Culture, Leonard Nimoy, Life, movies, Mr Spock, Star Trek, television. Bookmark the permalink.

2 Responses to It’s always the last place you look