With political scandals, the Queen dining with former terrorists and my sending a manuscript to the publishers, it’s a fair question to wonder why I’m writing today about wrestling.  The answer is because I had such fun watching it on Monday afternoon.

Despite having working at home now for a year, I have never until now had an easy day.  Every morning I am logged on to my PC by 6am and I am still mostly there until 7pm.  I blog, I write, I work on my business and in the summer spend a few hours in the garden or on walks and during the winter managed to decorate half the house.

I always used to watch wrestling with my Grandad in the late 70’s and early 80’s.  It was the old style British wrestling on a saturday afternoon.  There was one camera angle, if we were lucky, no fireworks or entry music and though the wrestling was sometimes more technical than today, the athletes were also less versatile in their moves and much less entertaining to watch.

Somehow things changed around about 1989 when we got satellite tv.  Sky TV filled their broadcasts schedules with cheap TV, much of it being from the WWF and to almost everyones surprise it became a big hit.

The reasons I liked it then are the same that I like it now.  Instant gratification, a bit of glamour and violence… more of that later.  I remember staying up until 2am in the morning to watching Wrestlemania 6 and watching The Ultimate Warrior beat Hulk Hogan live from Toronto.  I loved every minute even though I had an exam at school the next morning.

The WWE labels itself not as sport but as sports entertainment.  The entertainment bit is important because of the many years detractors claimed wrestling wasn’t real.  Maybe not, but if you like that sort of thing then it is entertaining.  They “fight” day after day, travelling from city to city, country to country and often fighting 10 or 12 days out of 14.

If the results are often though not always fixed, it takes nothing away from the entertainment of the event itself.  Lots of people go to the cinema to see say James Bond.  We all know everything will be ok in the end, the fun is seeing how we get there.  It’s the same in wrestling except that regardless of the factor that it may not be entirely real,  the twists and turns are the fun.  We can marvel at the moves, the physicality, the stunts, the stupidity and the entire spectacle of the event. 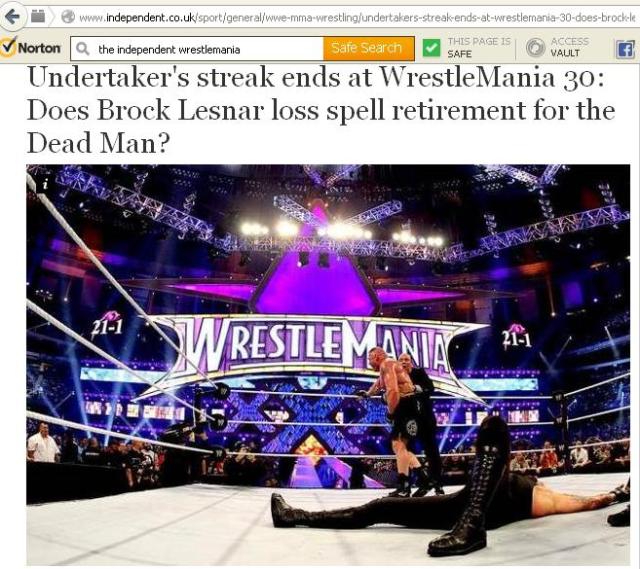 News of The Undertakers loss even hit the headlines of quality British newspapers.

There are few areas of society that it is acceptable to watch or enjoy violence.  You can try to do it in real life but you’ll probably either get killed or arrested and besides, no-one wants to actually hurt someone or get in trouble… the wrestlers can do it all for you and probably better too.

The amount of training and dedication to become a successful professional wrestler is incredible and it is one of the most dangerous sports to pick as a career.  You don’t have to do too much investigation to see how many suffer permanent severe injuries from them doing their job, when something goes wrong or their bodies just give out from the huge strain they put themselves through.

Sadly you don’t get to see many wrestlers reach old age.  Many of those that I watched in the 1990’s are no longer with us.  Mr Perfect, the British Bulldog, Randy Savage, Andre the Giant, Chris Benoit, Eddie Guerreo, Rick Rude, Buddy Rose to name just a few .  Many die from heart problems or those related to substance abuse.  A few like Owen Hart die whilst performing.

Unlike other performers, they never shy away from the cameras and they deserve as much respect as any other sportsman or any theatrical actor for their work combines both elements.

I always enjoy watching wrestling and I don’t mind saying so.  Whilst I enjoy watching other sport for sports sake, it is much easier if you at least sometimes have someone who wins.  So I like tennis but I was 39 before Andy Murray win Wimbledon so in essence I spent half my life cheering for “the other guy”.

It can easily cost £60 or $100 to watch a Premier League Football match.  In my near 40 years of supporting my football team, Newcastle United, they have never won anything of note and probably only had 4 or 5 enjoyable seasons in all that time.  They have been owned by a succession of incompetent owners and largely either hard-working but less than stellar players or over-paid and non-interested footballers who cheat, dive and all ready to move to a new club if they get even more money.

I don’t like car racing or formula 1, it’s all boring to me.  The same with swimming, horse-racing, much of golf and the sports I do like are often minority sports, rarely on television except for Cricket which again isn’t what it was due to its obsession with money and short 20-20 matches rather than the full-on 5 day matches.

I like rugby but don’t really like the England rugby team as they often have an arrogant attitude as opposed to Wales who I much prefer to watch.  How can I cheer on the England football team when it is composed almost entirely of players I dislike as they play for English teams I dislike?

It’s not the same with wrestling.  If I watch an hour of wrestling, then I will probably see at least one or two people I like, win and even for those I dislike, I enjoy the action, the stupid commentary and the razzmatazz.   I actually went to see Summerslam 92 at Wembley Stadium and was one of around 130,000 people probably having the time of their lives as The British Bull Dog Davey Boy Smith beat Bret Hitman Hart at the finale for the championship.

So on Monday I watched my first Wrestlemania for about 10 or 12 years.  I had been timing by meal-breaks in previous weeks to get into the current story-lines and I handily had finished writing the first draft of my book a day or so earlier.  Wrestlemania was screaming for my attention.  Would I still like it?

The Undertaker and Brock Lesnar face-off (photo from Wrestling depot)

Of course I did and probably had the most fun afternoon that I’d had for years.  One or two of the bouts were bizarre but fun and the main action was even more incredible and better presented than it had been before.  Wrestlemania is the FA Cup Final or the Superbowl of wrestling and everything about it is more ostentatious than the usual events.  The fact the The Undertaker lost his unbeaten streak of over 21 years was such a surprise that it even made the British newspapers.  I was pleased as I had gone off him about 10 years ago and in Brock Lesnar, a legitimate UFC  heavyweight champion in a hard-hitting sport not at all plagued with suggestions it is not real.  It was a moment of sporting history that I was glad to experience and the silence and looks of horror on the 70,000+ crowd showed that those who like their wrestling, really love their wrestling.

Brock Lesnar – “The Beast Incarnate” and legitimate tough guy having won the UFC belt after just 4 fights. Photo from The Void

It is said that The Undertaker hand-picked Lesnar to be his final opponent but there is also the possibility the fight ended early as The Undertaker is now 49 years old and is rumoured to at times need walking sticks just to walk.  To be honest, he was only a shadow of the wrestler he used to be and it seems likely he got badly hurt and that the match ended in an emergency as he was later sent to hospital along with another wrestler who spent the night coughing up blood. 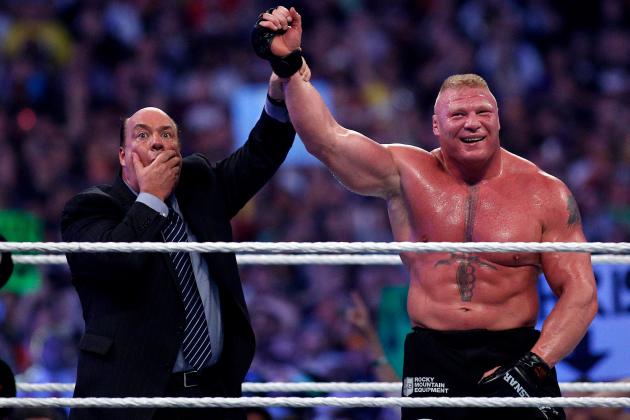 History as made as Brock Lesnar smashes The Undertakers 21-0 record at Wrestlemania 30. Wrestling is full of traditions and one of them is that when a great wrestler retires he loses to a star that can carry on his name rather like the idea of a warrior taking the glory and power of the fallen he has beaten.

The shock of the historic events in the WWE universe pretty much overshadowed the rest of the event until the underdog Daniel Bryan fulfilled his dream of winning the championship belt in a 3-way match against Randy Orton and Batista.

What really made me write today was the news that The Ultimate Warrior died yesterday aged just 54.  He had only been on Wrestlemania a day or two earlier being inducted into The Hall of Fame.  He seemed extremely well but it is a reminder of what happens all too often to the men who are often derided for putting their bodies on the line time and again.  It was strange to think that one of the two men I stayed up until 2am to watch 24 years earlier had died just a day after I saw him again for the first time in years.  If the defeat of The Undertaker was one giant end of an era for wrestling then this is an even bigger one.

Ironically The Ultimate Warrior appeared on Monday Night Raw less than 24 hours before his death we he passionately spoke to his fans:

“No WWE talent becomes a legend on their own. Every man’s heart one day beats its final beat. His lungs breathe their final breath. And if what that man did in his life what makes the blood pulse through the body of others and makes them bleed deeper and something larger than life then his essence, his spirit, will be immortalized. By the story tellers, by the loyalty, by the memory of those who honour him and make the running the man did live forever. You, you, you, you, you, you are the legend makers of Ultimate Warrior. In the back I see many potential legends. Some of them with warrior spirits. And you will do the same for them. You will decide if they lived with the passion and intensity. So much so that you will tell your stories and you will make them legends, as well. I am The Ultimate Warrior. You are the Ultimate Warrior fans and the spirit of Ultimate Warrior will run forever.”

The Ultimate Warrior beat Hulk Hogan for the champtionship at 1.50 am my time in Wrestlemania 6.  RIP James Hellwig.

I am a writer and traveller with a penchant for history and getting off the beaten track. With several books to my name including a #1 seller, I also write environmental, travel and history articles for magazines as well as freelance work. Recently I've appeared on BBC Radio and Bloomberg TV and am waiting on the filming of a ghost story on British TV. I run my own private UK tours company (Ye Olde England Tours) with small, private and totally customisable guided tours run by myself!
View all posts by Stephen Liddell →
This entry was posted in Life, Popular Culture and tagged Brock Lesnar, Daniel Bryan, Life, News, Sport, The Ultimate Warrior, The Undertaker, Wrestlemania XXX, Wrestling, WWE. Bookmark the permalink.