iTunes The Soundtrack to my life

I was a bit of a late comer when it came to digitally stored music.  Partly it was because I was too busy, partly because being a practical sort of person, spending money on a electrical storage device always seemed to be a bit of a luxury.  I also like to see my possessions, not have them invisibly stored in a little computerised box.  Music and videos to me are like books and should be displayed.  I like looking at them, I like browsing them.  They are a part of me given that I don’t generally buy anything which I am not really really keen on.

To be honest I would never have even got into iTunes but someone kindly gave me an old Apple iPod.  They had barely used it at all whilst within days I was using it to its full capacity, linked it to various bits of kit around the house and had apps for everything for planting seeds in my vegetable patch to tracking the planes flying over head, something which is quite a frequent occurrence when just 15 miles from Londons Heathrow Aiport and several other major airports too.

What I most liked about it though was the facility to store my music and just as good to purchase new music legally.  Did you see the last word of that previous sentence?  I’ve never been one to pirate music or movies.  If something is good enough for me to buy then it is good enough to pay for.  We as writers should all be in agreement with that right?

Lots of people complain about iTunes but it also has legions of fans and I am one of them.  It’s so easy to port over your old CDs along with album covers and info and have you own personalised little jukebox which just happens to be able to do thousands of things as a bonus. 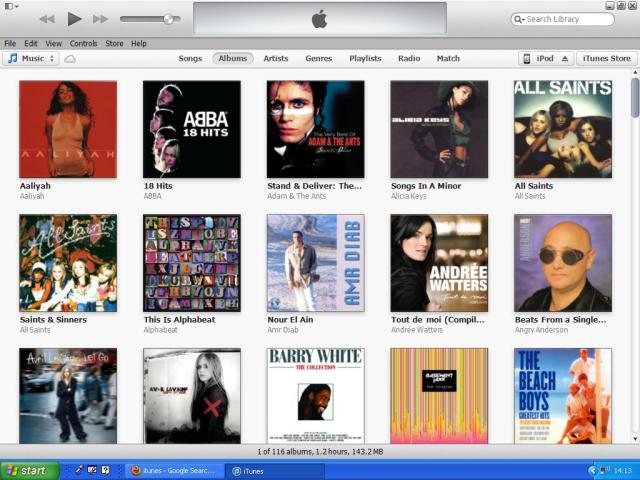 One bizarrely diverse iTunes collection and that is just for the A’s.

As well as liking the fact that iTunes is 100% legal and pays artists for their work, I like its simplicity and ease of use.  I have a hugely eclectic range of music on my ‘new’ iPod Touch.  Anything from Abba to (The) Verve.  I’m not one though for obsessing over every track from a particular musician.  To be honest I don’t really care about them and I don’t have time to become familiar with them and so enjoy them.  Whereas in the old days there was little choice to purchase a complete CD or record even if you only wanted their only number 1 hit, now I don’t have to.  Which means in effect whereas before I would go without buying any of them, now I can pick and mix and buy the one or two songs that I actually really like.  It separates the wheat from the chaff!

Following from this theory I have also bought the selected hits of the various decades.  Not for me the hours of exciting music from the 60’s which to my modern ears at least sound bland and samey or indeed the same which can be said of the electro pop of the 80’s or the seemingly talentless monotonous spoken rap and beats of todays chart music.  However I can pick the hits that transcend the decades or ones that remind of memories of the distant and not so distant past.

When I have a flashback and remember how much I liked the sound of something or heaven forbid hear something new that I like then it is easy to buy a copy for a few pence and add it to my collection.

As I like travelling and like to think of myself as multicultural then I don’t just limit my music to British or America.  I have Scandinavian which I can understand and French that I can’t.  I have Mozart or Beethoven which everyone has heard and medieval Iranian nei music on which I’m pretty much on my own.

iTunes is also good for me as I can get tunes that I have heard from my music.  I firmly believe that you don’t have to understand the words to like the music, something which presumably everyone outside of Britain and America has to do to a certain degree to enjoy our music.  So I have a song from a French Canadian singer which I heard 10 times a day when I was in Paris for a week and the legendary Habibi ya nour el ain  by Amr Diab which was blared out of every taxi stereo and Egyptian hotel for a decade, so much so that I can sing along with most of it even in Arabic.  The link for the video is here but I make no apologies for that, I only say that the tune is incredibly catching and possibly annoying after hearing it dozens of time http://www.youtube.com/watch?v=dK2U-0U0hA4

I also like how on iTunes you can play random songs or by artists, albums or even themed playlists.  I have not got several gigabyte of music but to be fair to me, I do listen to nearly all of it.  I know exactly how many songs of my favourite albums I can listen to on my drive home, how I can listen to one long track or 3 or my favourite shorter ones when I shower. How I can listen to whatever takes my mood at the touch or a button, or swipe of a touch sensitive screen.

One of my favourite pieces of music is track number 5 on my Buddha Bar Volume 1 CD.  I remember my trip to Buddha Bar in Paris very well even though it was many years ago.  An extremely trendy and relatively obscure club restaurant that only came to live at about 2am and had the most wonderful mixed and original music.  Inside it was themed as a kind of 1930s opium club with much of the largest area dominated by a giant buddha.  The night I was there it seemed to be particularly popular with uber rich Russian business mafia types but I still remember ‘What Will Be’ by Zeava Ben.  The singer is a Jewish Israeli with Moroccan heritage and the music is a great mix of styles and cultures.

I am sure that most many people will have watched one of my favourite films “The Shawshank Redemption” .  There is a scene where Morgan Freeman’s character Red heard some Italian opera that he couldn’t understand but loved dearly.  He said “I have no idea to this day what those two Italian ladies were singing about. Truth is, I don’t want to know. Some things are best left unsaid. I’d like to think they were singing about something so beautiful, it can’t be expressed in words, and makes your heart ache because of it. I tell you, those voices soared higher and farther than anybody in a gray place dares to dream. It was like some beautiful bird flapped into our drab little cage and made those walls dissolve away, and for the briefest of moments, every last man in Shawshank felt free”.

That is a lot how I feel when I listen to that song.  It’s in Hebrew and from what I can gather it is about two lost lovers looking across a hot desert but more than that, I don’t want to know and don’t need to know but a more touching mournful song is hard to find in any language.  Here is a link to the song and video.

I am a writer and traveller with a penchant for history and getting off the beaten track. With several books to my name including several #1 sellers. I also write environmental, travel and history articles for magazines as well as freelance work. I run my private tours company with one tour stated by the leading travel website as being with the #1 authentic London Experience. Recently I've appeared on BBC Radio and Bloomberg TV and am waiting on the filming of a ghost story on British TV. I run my own private UK tours company (Ye Olde England Tours) with small, private and totally customisable guided tours run by myself!
View all posts by Stephen Liddell →
This entry was posted in Life, Popular Culture and tagged Culture, iTunes, Life, Music. Bookmark the permalink.

23 Responses to iTunes The Soundtrack to my life