The destruction of historic Mecca by Saudi Arabia

Below is another article which I have recently written for the Muslim Academy site which is run to increase East-West understandings.

If the first church of St. Paul was to be destroyed or the house of Mary, mother of Jesus, were to be razed to the ground there would be a near universal outcry; yet events of a similar scale are happening in Saudi Arabia with hardly any protest whatsoever.

In the last 10 years, there has been the state-sanctioned destruction of 500 historical sites, according to Dr. Irfan al-Alawi, who heads up the Saudi Islamic Heritage Research Foundation.   However, there have been only muted protests by most countries as governments of most Islamic countries are wary to criticise in case it hinders the passage of their citizens through Saudi Arabia, whilst western states remain silent for fear their limited access to archaeological sites in the country may be withdrawn altogether.

Home of the Kaaba, the Holiest place for Muslims

Sami Angawi, a renowned Saudi expert on the region’s Islamic architecture, is equally concerned. “This is an absolute contradiction to the nature of Mecca and the sacredness of the house of God,” he told the Reuters news agency earlier this year. “Both Mecca and Medina are historically almost finished. You do not find anything except skyscrapers.”

This is part of a 2 prong attack on historic sites.  The Saudi government is determined to showcase Mecca as an ultra modern city full of skyscrapers, gaudy hotels and expensive shops in a manner lacking any style whatsoever let alone in line with the expectations of the majority of pilgrims when they visit Mecca and Medina.  This backed up by the strict Wahhabism who believe that antique sites and shrines encourage the practice of “Shirq” or polytheism and as such they should be destroyed.

Recently mountains have been dynamited along with an Ottoman era fortress and 95% of Ottoman era buildings including family homes.  What is more, the house of Khadijah, the first wife of Prophet Muhammed has been converted into a toilet block.   Three ancient mosques are at imminent risk in Mecca and Medina as are areas of the Grand Mosque and the house of the Grandson of the Prophet was dynamited over 10 years ago to celebrations of the local religious police.

In the whole of the huge country of Saudia Arabia, is this spot next to the Grand Mosque the best place for tacky and tasteless architecture?

Despite billions of pounds of Saudi aid spread around the world in a bid to promote their particular creed, only a tiny minority subscribe to the Wahhabi beliefs. Many mosques which were both ancient and architecturally speaking beautiful and in keeping with their local culture have been replaced by expensive though culturally ill-fitting and austere Saudi style mosques. However, the House of Saud is powerful due to its wealth and underground connections which deter criticism from any meaningful Islamic politician.

In many ways they are similar to the Puritans who ruled England for that brief period when England was a republic following the beheading of King Charles I by Oliver Cromwell.  Then anything deemed religious impure or distracting was banned or destroyed with even Christmas Day itself being said to be banned though this is thought to be largely a myth.

Saudi Arabia is increasingly full of bland and tacky tower blocks built over builds of actual historic and aesthetic value.

Just some of the important places facing destruction include:

The Bayt al-Mawlid, the birthplace of the Prophet which may soon fall under yet more skyscrapers.

400 year old Ottoman columns in The Grand Mosque, some of the oldest remains but infuriatingly to Wahhabis inscribed with the names of the companions of The Prophet.

Al-Masjid an-Nabawi in Medina containing the grave of Abu Bakr and Umar which Saudi officials have confirmed as being idolatrous and needing to be destroyed.

This is the second holiest site in Islam and incredibly important religiously and historically and yet threatened by demolition.

Jebel al-Nour, the mountain outside of Mecca where Muhammed received his first Koranic revelations.  Unlike in other countries where it is common to visit or pray at shrines and mausoleums, this practice is strictly denied to visitors to Saudi Arabia who want to visit any historic monument.  The Hira cave is especially popular with Muslims from Asia and Saudi officials are keen to stop congregations gathering here with solutions including bulldozing the steps up the mountain or even blowing the mountain up being considered. 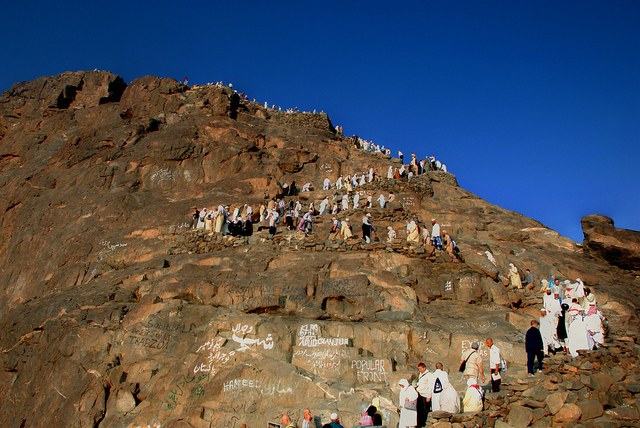 Visitors to Mecca re-visiting the footsteps of the Prophet Muhammeds but for how much longer?

Surely this is cultural and religious vandalism?  These sites though do not belong to Saudi Kings and princes but to all Muslims, to all people of the world.    The world has been rocked by protests of much smaller insults to Islam by individuals in America or Israel but does it make everything acceptable if the acts are perpetrated by the Saudi state?

Here is my related article to the destruction of historic, cultural and religious sites by ISIS / ISIL

I am a writer and traveller with a penchant for history and getting off the beaten track. With several books to my name including a #1 seller, I also write environmental, travel and history articles for magazines as well as freelance work. Recently I've appeared on BBC Radio and Bloomberg TV and am waiting on the filming of a ghost story on British TV. I run my own private UK tours company (Ye Olde England Tours) with small, private and totally customisable guided tours run by myself!
View all posts by Stephen Liddell →
This entry was posted in Culture, history, News, Politics and tagged Architecture, cultural vandalism, Culture, history, Islam, Mecca, Middle-East. Bookmark the permalink.

28 Responses to The destruction of historic Mecca by Saudi Arabia