Almost everyone in the U.K. is obsessed by property.  Everyone under 30 dreams of owning a house that they can never afford, everyone over 60 counts their lucky stars that they grew up in the post-war boom when houses were big and cheap and had solid walls whilst those in between spend all their time looking to upgrade their home and move to somewhere bigger, better, quieter and usually with fewer neighbours.  Happy in the knowledge that they were either clever or lucky enough to save more than their younger siblings whilst cursing the good fortune of not being born just 3 or 4 years earlier when everything was so much less expensive.

I admit that I am no different.  I started saving for my first flat (apartment) the day I started work and even though the prices rose by over 100% in the time it took to save up a deposit, when the time came to buy I knew exactly what I wanted or at least what I could afford.

The same is true now; there probably isn’t a “nice” house within 30 miles of me that is for sale that I don’t know about.  Nice here can be defined as better than what I own and what I can feasibly afford to move to in the next 3 or 4 years.  Like many people in their 30’s, 40’s and 50’s too many Sunday afternoons, especially in the winter, are spent on the estate agents websites.  I know where the detached houses are in the country and the same value semi-detached houses in the nicer towns for the same money. Don’t think I am too weird as it has become as routine here as buying DVDs on Amazon.  In fact if you ever go to a picturesque town across Britain, you’re guaranteed the estate agents window will have a crowd of people staring in comparing their house price with that of the much more desirable place.

It’s not just the next step on the housing ladder that I look at but those several up the line as well as the odd tangent.  We have on our radar properties in Cornwall for bed and breakfasts in case of sudden business opportunities, farms and cottages in the Lake District, traditional old houses in Norfolk and Shropshire and totally isolated farmhouses in the Northumberland and even the Scottish Islands which look as if they might be at the ends of the earth, which is pretty much what I’m looking for.  As a plus point they would make a good bolt hole in case a Zombie attack gripped southern England.

I know that for the price of a farm in Normandy, France with very little roof and no electric or water, I could get two flats in Berlin, an olive grove and house in Portugal or much of an apartment block in Hurgada, Egypt.  Alternatively that same amount of money could get me a leased garage in London for just a few weeks.

Estate Agents in the U.K., England and in particular London are famed for being notorious with underhand dealings to swing deals and their property descriptions need to be taken with a pinch of salt, if not a whole salt mine.

Much improved by previous owner means the house was originally a dump and the previous ownder ran out of money and lost the will to live… so would you if you were stupid enough to buy it.

Great potential if you have £50,000 in spare cash.  Basically it is in urgent need of underpinning.

Close to motorway and rail links means the house is at the end of platform nine and just 100 metres from the M25 / M1 interchange.

Convenient for local schools = a stones throw from the yobs playground.

Close to all amenities. (Next to an off licence and chip shop with a bus stop outside your front door)

Views over open countryside. I saw this one just a few weeks ago, the open countryside was a line of poplar trees followed by 30 feet of grass behind which was a busy road and then the ruins of an old airfield with planning permission for 450 new houses to be built on it.

Ideal for children can only mean there are  noisy neighbours with noisy children.

Vacant possession – The last occupant died in there and was not discovered for six months.  Please don’t ask questions about the smell when viewing the kitchen.

Borders: As in ‘Dulwich borders’ or ‘Blackheath borders’ in London. Basically a rather loose term to describe anywhere within a 10-mile radius of somewhere half decent.  Sometimes fake-geographical terms are used.  So to sell a house in undesirable Slough to an unsuspecting outsider they might label the house as being in North Windsor.  Windsor is small, pretty home of the Queen and countless expensive shops and restaurants… Slough is not.

Charming: Another word for small, pokey or tiny.

Community feel: The neighbours have had to get together to do something about crime levels. ‘Community’ can also indicate the presence of a busybody who will monitor your every move and report back to the neighbours regarding the number of visitors of the opposite sex you have.

Compact: You can cook the dinner while you’re in the shower without losing sight of the TV.

Garden flat: The ground floor in a block of flats with a shared garden. Your neighbours will spend most of their time having BBQs right outside your bedroom window.

Good use of space: There’s no room for the fridge in the kitchen so it’s in the living room while the washing machine is in the bathroom. It might also have something strange like a bedroom leading off another bedroom.

Ideal for investors: You wouldn’t want to live there yourself as it is next door to drug dealers but some desperate youngster will probably be stupid enough to live there..

Near local nightlife: Don’t expect to get to sleep until the clubs have shut and be ready to clear the takeaway wrappers from the front garden each morning.

Original features: No work whatsoever has ever been done on this property since it was built in the 1890’s.

Potential: Ideal for a DIY enthusiast with lots of time and money on their hands who doesn’t mind living in a dump.

Quiet neighbourhood: Your neighbours will object to you starting your car before 8am or having more than two visitors at a time.

Sought after location if you don’t mind living next to a ring-road or next door to an out of town shopping centre, sought after locations also mean you are likely to be gazumped (outbid at the last moment) by rich land-lords who will buy the place and then rent it out to you at a higher cost than the monthly mortgage rate would be if only you had been able to buy it in the first place.

Up and coming area: Presently down and out — it can only get better.

Updating: Interchangeable with “modernising”. If a property needs either updating or modernising it generally needs knocking down and starting again.

Viewing recommended because the website and posters don’t show it off well-enough because basically the home is a dump.

Village: Could mean one of two things. Either it’s nothing like a village but there are one or two independent shops or cafes which give it a ‘village’ feel, or it’s a ghost town where everyone stops speaking when a stranger enters the local pub.

Reduced price for quick sale.  All of the the above, buy it quick before the house falls down.

Having read all of this then spare a thought for poor 67-year-old farmer Luo Baogen in China who refused to sell his house for the derisory sum of Yuan 260,000 (£26,000) even though all of his neighbours did when the Chinese government announced they were going to build a motorway through his farm.  As such he now finds his house surrounded  or actually as part of the motorway.  While I am very surprised that the Chinese government didn’t simply evict him like what has happened to thousands, if not millions of others from the building of the 3 gorges dam right up to the Olympic Stadium construction in 2008, surely with all their money they can find it in their hearts to compensate  him properly.  Having said that, why in such a huge country could they not build it elsewhere?

Nice to see that while they may be taking over the world or at least the territorial waters and islands of neighbouring states, the Chinese government still doesn’t understand the concept of human rights, dignity and even simple health and safety; if not of the farmer then of the motorists.

This got me thinking of some other weird houses that I have seen on my travels.

Above is a house in Newquay, Cornwall.  I have walked around this beach myself and under the metal bridge which connects it to the mainland.  Maybe it was useful 400 years ago when Cornwall was full of pirates and smugglers but it must have been tricky yesterday crossing in the 80 mph storm.

I went to Alnwick Castle last year, a huge imposing place and a few years earlier the owner had built the biggest tree house in the world costing about £5million.

While many people convert houses from water tanks, sewage farms and nuclear bunkers, this water tower has been completely re-modelled.

This home-owner must have loved Jaws.

The house above caused a national outcry in 1986 when the owner of this typical terraced house in Oxfordshire decided to build a fibe glass shark onto its roof.  Despite years of legal wranglings, it was eventually granted planning permission on the grounds that eccentricity must be safe-guarded in British homes and it is still there nearly 30 years later.

It’s nice to see that our European neighbours can be equally eccentric such as with this shoe house near Rotterdam….

The Warped House in Poland

No, I haven’t put this photo through Photo-shop, it was actually designed and built this way.  I’d like to see an Estate Agent put a good spin on this one.

Is it just me or does your head ache if you look at this photo too much?

There are also houses built upside down across the world including this one below in Germany. 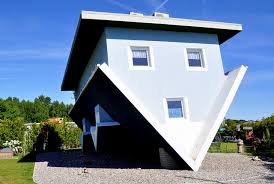 Upside down house in Germany

Perhaps my favourite and undeniably cosy (another Estate Agent term for small) are those like the streets below in York. At least Luo Baogen wouldn’t have to worry about high-speed traffic in these narrow lanes.

This is The Shambles in York. Part of a maze of ancient medieval streets full of wonky houses some of which it is possible to lean out of the upstairs windows and shake hands with the people in the houses opposite.

I am a writer and traveller with a penchant for history and getting off the beaten track. With several books to my name including several #1 sellers. I also write environmental, travel and history articles for magazines as well as freelance work. I run my private tours company with one tour stated by the leading travel website as being with the #1 authentic London Experience. Recently I've appeared on BBC Radio and Bloomberg TV and am waiting on the filming of a ghost story on British TV. I run my own private UK tours company (Ye Olde England Tours) with small, private and totally customisable guided tours run by myself!
View all posts by Stephen Liddell →
This entry was posted in Life and tagged estate agents, houses, Life, weird news. Bookmark the permalink.