This week I am guest blogging at the excellent Political Idealist website which covers political, news and current affairs both in the U.K. and around the world. The Political Idealist is run by the very talented Jack H. G. Darrant who takes a healthy interest in environmentalism and British democracy, you may also have read his letters in the Independent newspaper as well as his weekly contributions in the popular ShoutOut blog. If you would like to find out more or you enjoy my article below then you might want to check out Political Idealist.

A few days earlier it was announced that the British government is considering making the temporarily extended Sunday Trading hours which were brought in for the period of the Olympics and Paralympics, permanent.

The UK Sunday trading laws were relaxed for the period of the Olympic and Paralympic games but is this the thin end of the wedge?

There is almost common agreement within our society that if there is something wrong with our country a considerable amount of blame lies with the over-commercialisation of almost every segment of life. Whether it be blatant advertising aimed at children or the overt objectification and sexualisation of women on television, magazines and billboards or the erosion of family life with Christmas which is now just a big excuse for a shopping spree. Even the New Year Sales are a thing of the past because for commercial reasons the sales now start on boxing day, once a day for spending time with family or friends at home but now for spending time with family stuck in the checkout-queue at Tescos like every other day.

The Sunday Trading laws were introduced in the 1990’s primarily due to the pressure of the large DIY chains who were incidentally friendly with the Tories. Whilst few would like to go back to the 1950’s there can be little real need to extend the trading hours of shopping centres and supermarkets to effectively make Sunday just a normal day.

Initially shop-workers were offered double time or at least time and half pay for working on Sundays and no-one was to be forced to work Sundays. These days people are expected to work 7 days a week and with no extra pay. What’s more those that we are told are happy to work on minimum wage are missing out on spending time with their family and children whilst the more affluent are free to spend there time at home or in the shops as they see fit.

This issue exposes the contradictory elements of a Conservative party which always supports big businesses whilst claiming to be the party of tradition and the family. These are two policies which can never be reconciled. When it comes down to it money talks and the poor have to work and further the reaches of broken Britain.

This comes almost 2 years since the Prime Minister had to swiftly change his views that the average family should rein their spending and pay off their personal debt following pressure from his advisors and retailers. Focusing society ever more tightly on spending money and viewing shopping debt as normal and even a desirable way of living is not going to help anyone. Even if every shop were open 24 hours a day, 365 days a week the amount of money in the average family wallet to spend would remain the same. 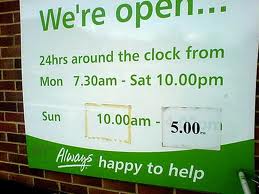 This supermarket is one of many that states the current Sunday opening opening hours are limiting its trade even though it can be open 24 hours a day 6 days a week.

Do we really want to hand over the few redeeming and non-commercial parts of modern life? Does the government think we the people are too stupid not to remember we cannot buy at 10pm on a Sunday night and we all have to go without for just a few hours until Monday morning? Certainly people in France get on quite well with their shops not even being open all day in the week let alone Sundays and whatever is said about the French, not many British tourists seem unhappy with their slower and less commercialised life-style.

If we need these few extra hours to get ourselves out of the recession then maybe we should be looking at re-aligning how our country works and its priorities.

To those that say the market is king and individuals must be able to do whatever they want whenever they want I say that I pretty much like to open my house window and not hear constant traffic, I like to walk or cycle through relatively quiet streets. I like to watch a film on Sunday afternoon on television in September without being urged to spend money I don’t have on Christmas presents nobody needs and which are rarely used.

Big shop owners are precisely the people who most likely enjoy the same things that I do when I do and don’t spend their valuable spare hours fighting trolleys at the frozen food counter on a Sunday Boxing Day at 10am. They have their 6.5 days of crass money-obsessed society, let those of us who prefer something better have our half a day or peace and quiet. If the government goes ahead in making these changes permanent, please don’t pretend in 5 years time that we have a soulless, debt ridden and celebrity obsessed society because that is what you have always wanted just like when you changed the Sunday opening hours in the ’90s too.

I am a writer and traveller with a penchant for history and getting off the beaten track. With several books to my name including several #1 sellers. I also write environmental, travel and history articles for magazines as well as freelance work. I run my private tours company with one tour stated by the leading travel website as being with the #1 authentic London Experience. Recently I've appeared on BBC Radio and Bloomberg TV and am waiting on the filming of a ghost story on British TV. I run my own private UK tours company (Ye Olde England Tours) with small, private and totally customisable guided tours run by myself!
View all posts by Stephen Liddell →
This entry was posted in history, Life, Opinion, Politics and tagged Life, shopping, UK news, UK Politics, weekend. Bookmark the permalink.

5 Responses to Must Sunday be like every other shopping day?