Thursday was forecast to be a wet day so we decided to take the car in case we had to shelter. Bizarrely for a wet day we decided to go to the coast, happily for us not only did the sun shine for us but we saw some real neat places through the day.

Our first stop of the day was to a place called Moresby which is built on top of an old but totally un-excavated Roman fort on cliffs overlooking the Irish Sea. 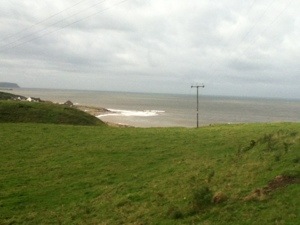 Upon the half of the fort which has no grazing cows is an older church and the ruined arch of a much older one. 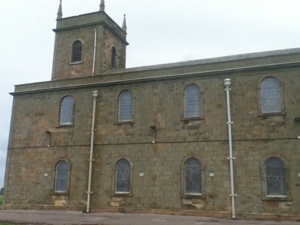 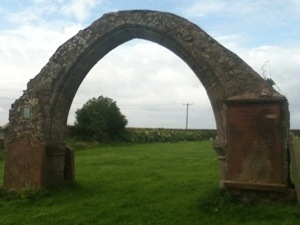 Built upon an old Roman fort, this Archway is all the remains of the old church at Moresby which stands next to its successor.

Inside the current church we were surprised to find it very well maintained for such an isolated windswept village. 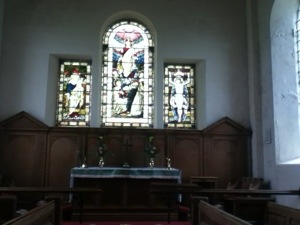 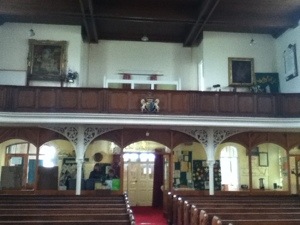 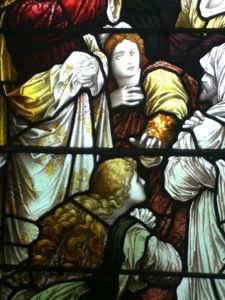 One of many beautiful stained glass windows in the church

I love visiting churches and seeing their individual characteristics and the graveyards with ancient yew trees and messages on the graves. One can learn a lot about each community there from the drawings of school children to the gargoyles in the roof. The gargoyle on the drain below is Viking in origin and reflects the local history of Viking raids and settlements. 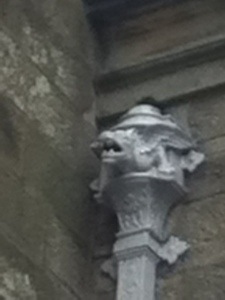 Perhaps what I look for most in churches is the war memorial. Every village in Britain has a war memorial originally for WW1 but usually adapted for more recent wars too. The memorials are usually very somber with a simple quote or stone curled flag and the names of the fallen from each conflict.

I am always astounded by the small villages who lost so many young lives that it seems incomprehensible now. I always think WW1 had a particular resonance for me and my country. WW2 may have been more desperate and in a sense heroic but the preceding war was so much more tragic and avoidable with millions of men joining up in August expecting to be home for Christmas but never seeing home again.

It was the time when the country went from a supposed innocent paradise of honour and faith and glory to a ravaged impoverished one hitting the modern world with a bang and going by the memorials a very empty one and never to be the same again even now. How sad. 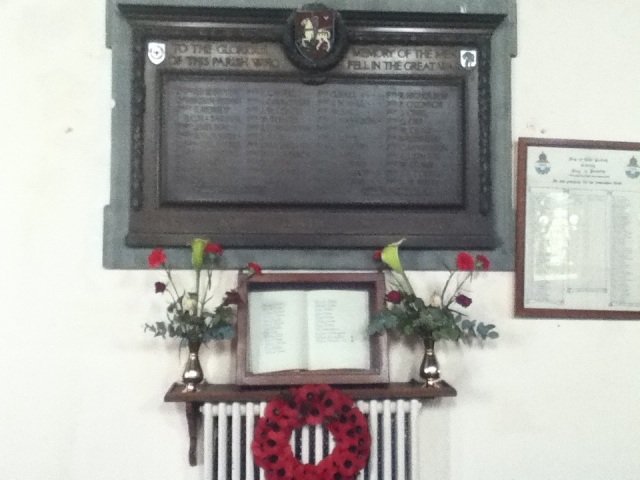 Rememberance Plaque for those fallen in The Great War

Each church had a small memorial like this one and often there is a book with the names and days which men and boys died on with a new page being turned every morning. If you think this war is now 98 years ago then obviously it must resonate with other people too.

Following the church we went up the coast to Workington Docks. The sea was stormy and the wind turbines were spinning furiously. 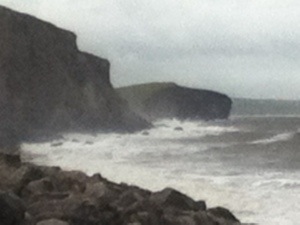 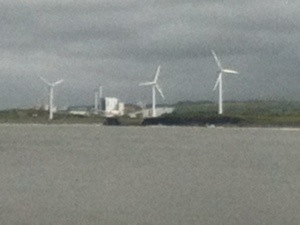 As this coast was very industrial until just a few years ago, it is possible to find all sorts of rock types. It was too windy to play with our frisbee but we could use it to carry our haul of coal, iron ore, granites and quartz! 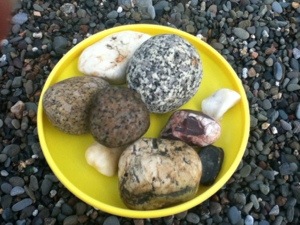 Is it just me or does one of those stones look like a dinosaur egg?

We went further northwards seeking sandier beaches and sunshine only stopping the car at these slightly unimpressive Roman ruins below. 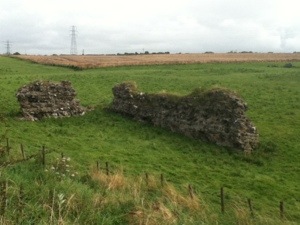 Although most people are familiar with the Roman wall that still stretches across the north of the country, many may not know that the Romans built forts every mile along the coast and they continue to reveal new treasures on a continual basis.

We drove on up the coast looking for a place to eat and found it at the little fishing port of Allonby. The pub doesn’t look much from the outside and certainly isn’t traditional looking outside or inside but the food and drink inside was delicious and they didn’t hold back on the portion size. 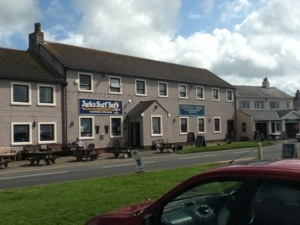 I can’t vouch for the hotel but the restaurant is great and just over the road from the beach.

Our little group had fresh cod, scampi and some pretty nice burgers followed by cheesecakes and chocolate gateaux washed down with various local ales!

We spent an hour on the beach watching the tide go out and waiting for our stomachs to go down. 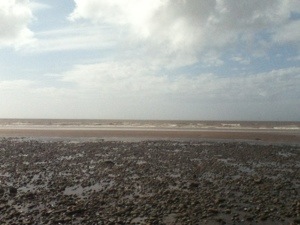 Allonby beach as the tide goes out.

Onwards and upwards we went ending our journey at the extremely fine Victorian seaside resort of Silloth. 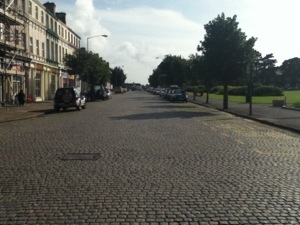 The wide open Victorian streets of Silloth must have been a welcome change to visitors from the city and with the park, beach and shops are as beautiful now as they have always been.

For sports fans if you think the grass is looking familiar then you may have seen it at Londons Wembley Stadium and probably at the Olympics too. It is all grown in and around Silloth.

We walked through the park past an old bandstand overlooking the promenade. 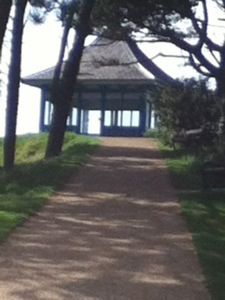 Situated on a small wooded hill with the park on one side and the sea-front on the other.

The promenade stretched further than we could see or walk so not even trying to go further we parked ourselves on a bench and broke out some tea, coffee and nibbles. 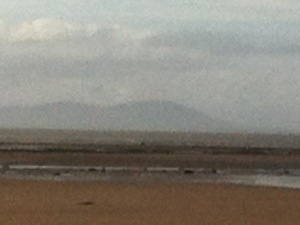 Across the sea we could see the first hills of Scotland as people walked up and down then promenade eating ice cream. I guess the modern word of ‘prom’ meaning a party event comes from this older habit of people promenading themselves to get the attention of girls and boys.

We decided to head back down the coast but when a deserted and extremely sandy beach appeared by the roadside we had to stop and run into the sea, 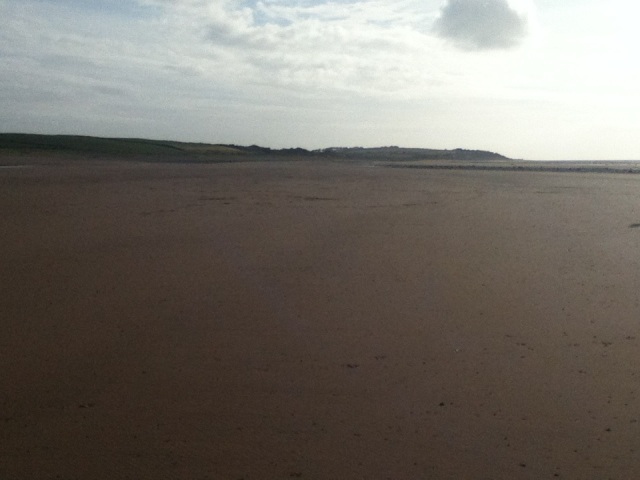 This beach is at old Milefortlet 21 between Allonby and Maryport. 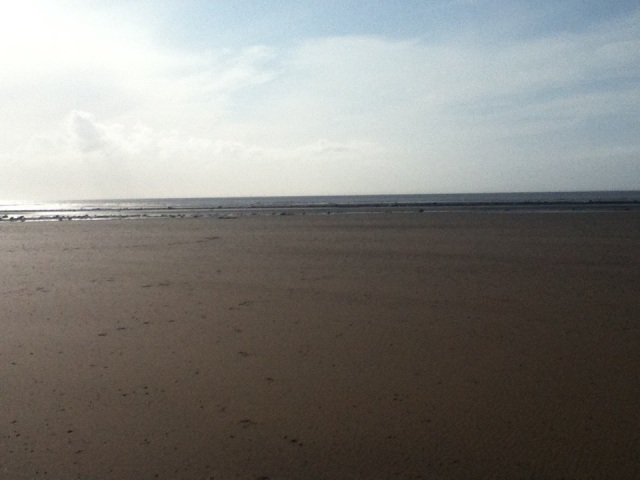 We pretty much had the place to ourselves and the sand was wonderful, you can see below grains blowing towards me. 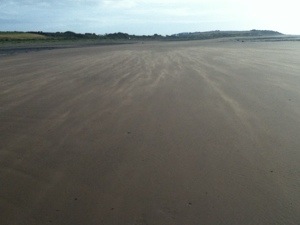 We stayed there longer than we had intended and only left when the sun began to set and lose its heat. 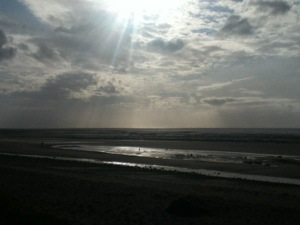 You don’t get this in London.

However the day had one last treat for us. Due to road closures we ended up diverted to an isolated old church with some unique exterior features. 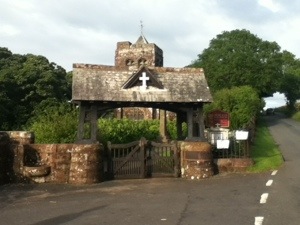 A beautiful entrance to the church with carved stone benches, water vessels and other features. 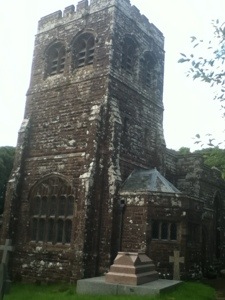 Sadly the church was locked but we took time to wonder round the very peaceful graveyard with just the rustling tree leaves for company. 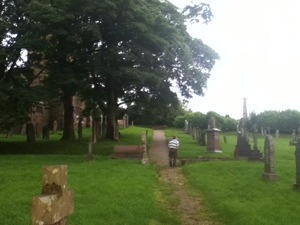 We haven’t seen any churches on this trip older than Norman – Medieval periods but then it is a rare day indeed when you discover a truly ancient Anglo-Saxon church with its beautifully simple structures and tombs of saints, crusaders, pirates and centuries old flags and banners but in this place who knows what is in the next village.

Just one day left of our holiday now and it is off to the mountains again maybe to Beatrix Potters house and I can say for certain it is pouring down outside! Where did I put my waterproofs? Depending on my journey home to London I will either post the final holiday blog on Saturday or Sunday morning.

I am a writer and traveller with a penchant for history and getting off the beaten track. With several books to my name including a #1 seller, I also write environmental, travel and history articles for magazines as well as freelance work. Recently I've appeared on BBC Radio and Bloomberg TV and am waiting on the filming of a ghost story on British TV. I run my own private UK tours company (Ye Olde England Tours) with small, private and totally customisable guided tours run by myself!
View all posts by Stephen Liddell →
This entry was posted in Cumbria & The Lake District, Travel and tagged beach, Cumbria, history, holiday, Summer, Travel. Bookmark the permalink.

1 Response to A seaside jaunt