Coronavirus Diary 57 – Following in the footsteps of Count Dracula

When one thinks of Count Dracula it is natural to think of Transylvania in Romania with  the dark foreboding forests and eerie castle or perhaps the ancient pathways and lonely hills of Whitby.

However some of Dracula is actually set in London and Brahm Stoker was clearly influenced by one or two cemeteries here in particular and going so far as to use one most likely in Hampstead as a setting for one of the most terrifying sequences.

So last week on totally unrelated business I headed to Hampstead ostensibly for work reasons and particularly St Johns at Hampstead to find two tombs in particular.  You may have gathered I quite like cemeteries for all manner of reasons and I even have a tour dedicated to some of the most fascinating Victorian cemeteries in London, cleverly named London Cemetery Tour.

When I visited this churchyard for the first time it had completely slipped my mind that it was also a location in Dracula but as soon as I entered I was quite taken by how atmospheric it is.  To help keep the Coronavirus at bay I was wearing sunglasses, something I had only done once since 2013 and that was when I went on the Underground a few days ago.

Wearing sunglasses in a heavily overgrown and shady cemetery instantly gives a feeling of dusk.  I’m not at all bothered about being alone in cemeteries, in fact it is usually living people who I try to avoid in them but it is easy to get a little caught in the moment, especially as a big fan of horror films and with an over-active imagination.  Besides which, the most interesting parts of cemeteries to me are the hardest to reach.

I liked that every now and then I would come across someone reading on a shady bench all surrounded by graves and tombs and very mature trees; obviously my sort of people and keeping up the ancient but largely lost tradition of spending time amongst long dead ancestors.

More than a few times I allowed myself a little jump when a pigeon would make a dramatic exit as I accidentally happened upon them.  Why don’t pigeons ever leave quietly?  There is a reason they are often used to create false alarms in horror films before the actual main-event scare.  At least the squirrels are quiet, I don’t mind noises in the bushes, it could be Dracula himself so long as he stayed in the bushes though obviously with my hair now being 6 months since a trim I suppose if he didn’t have his glasses on I might be mistaken for a fair-maiden.

Having found what I was looking for I came back out as I had a schedule to keep but only then remembered Dracula.  i spoke with a member of staff at the church and they weren’t sure but then a second person confirmed I was right so I headed back in.

For those who haven’t read Dracula, this cemetery was the resting place of Lucy, a lady that the Count had killed and who then in turn rose as a Vampire to pray upon the young and unwary of Hampstead Heath.

‘About ten o’clock we started from the inn. It was then very dark, and the scattered lamps made the darkness greater when we were once outside their individual radius… At last we reached the wall of the churchyard, which we climbed over. With some little difficulty, for it was very dark, and the whole place seemed so strange to us, we found the Westenra tomb’.

‘Suddenly, as I turned round, I thought I saw something like a white streak, moving between two dark yew trees… a white dim figure flitted in the direction of the tomb.’ 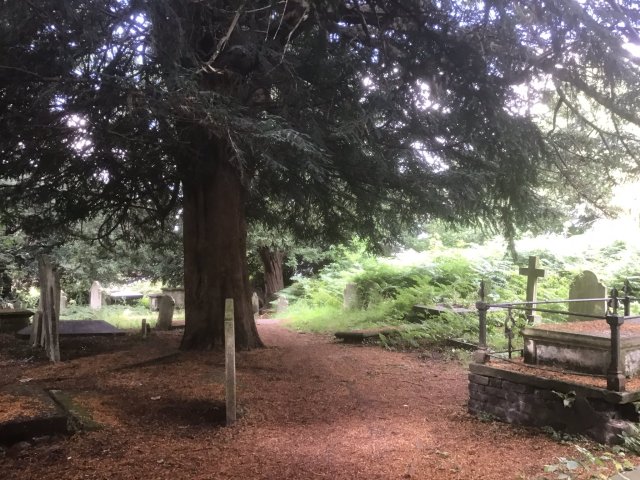 I’m presuming Dr van Helsing wasn’t getting flustered by pigeons!    After freeing at least one child that night, they returned in the day time to discover a Lucy who was even more beautiful in death than in life and now with fangs somewhat like a wolf.

‘How will you do this bloody work?’

‘I shall cut off her head and fill her mouth with garlic, and I shall drive a stake through her body’.

‘…a hideous, blood-curdling screech came from the opened red lips. The body shook and quivered and twisted in wild contortions. The sharp white teeth clamped together till the lips were cut, and the mouth was smeared with a crimson foam.’

The disturbed tomb of Lucy in Dracula?

I found a rather broken tomb and I wondered if this is the one that inspired the nightmarish events in the story of Dracula.  For such a small cemetery, it seemed clear to me that this one is particularly interesting and it’s not hard to see why Brahm Stoker was drawn to it.

I decided not to investigate further just incase… besides which I haven’t yet bought that Vampire Slayer Box Set which i wrote about yesterday!

I am a writer and traveller with a penchant for history and getting off the beaten track. With several books to my name including a #1 seller, I also write environmental, travel and history articles for magazines as well as freelance work. Recently I've appeared on BBC Radio and Bloomberg TV and am waiting on the filming of a ghost story on British TV. I run my own private UK tours company (Ye Olde England Tours) with small, private and totally customisable guided tours run by myself!
View all posts by Stephen Liddell →
This entry was posted in Heritage, Life, London, Popular Culture and tagged Cemetery, Count Dracula, Dracula, Hampstead, Hampstead Heath, St John at Hampstead. Bookmark the permalink.