In England, last Saturday was known as Super Saturday with the first substantial re-opening of shops and pubs soon after most shops re-opened.   Of course none of that interested me in the slightest.

It probably shows something of what a simple life I lead and what makes me happy when on an off-chance I decided to go and see a friend in her shop not too far away from where I used to live.  I didn’t even know if they would be open, if she would be there or if I could go in.  Still it was worth going there just on the off-chance to say ‘Hi’.

This would also be the first time I’d been in a proper building that wasn’t an empty church since the last time I was in a shop, funnily enough hers. (See Coronavirus Diary 2… wow have we been going that long?).  I still remember that day very well, it was a totally crazy day outside as the much of the planet seemed to obsess over toilet roll and food hoarding and even hand-shakes were a thing of the past. We had a good-bye hug that screamed we don’t care too much if we get the virus and if we aren’t going to see each other again then this is the way to go.

These days only 1 in 2,200 people have the virus in any form across the UK generally and many of these are concentrated in hospitals and caring institutions.  I was happy with my 0.052% chance I would get the virus and 1% of that of dying from it.  If I didn’t go out then I may be stuck inside for another 6 months or 2 years or ever and I’m way more likely to be on a ventilator machine in hospital from one of my regular chest infections that anyone else is of dying from this virus and I hardly lock myself away in mid-winter.

Having said that it is now 18 months since I last had a serious chest infection that required hospital visits or antibiotics… normally I get them right through the year.  How funny it is that having endured these awful things all my life, the one time everyone is getting a piece of the action, I have so far had the healthiest winter, spring and early summer since at least 1982.   It would be terrible to stay locked away for 2 or 3 years and then die of a bad chest infection anyway or indeed get pushed under a train…. again.

Anyway, when I got to the shop there were signs up with social distance measures advertised and only 3 customers would be allowed in at any one time.    I could see 3 in all ready so I hovered around outside until my friends husband waved me in and I took my customary point behind the counter.

Sometimes when I am behind the shop counter, I am left in charge for a few minutes and I always think of poor incompetent and not too bright Manuel when he finally gets to man the front desk in Fawlty Towers,

https://www.youtube.com/watch?v=w0Apd0IXZs0
My friend wasn’t to be seen so I chatted away for 10 minutes to the chap who also jointly runs the shop when my friend appeared from the store room.

“Mr Liddell’s!” she exclaimed, “I am just going to take Stephen round the back for 5 minutes” which sounds a bit naughtier in writing than in practice.  We didn’t quite make it to the store room or the back yard or kitchen and spontaneously one of the biggest hugs in history took place.  It was so big it would not have been a surprise if the skies had darkened and lightning bolts appeared as the the Earth rumbled ominously like in movies when 2 unstoppable forces finally come together!

My friend is very slim and quite tiny but very strong so I don’t worry too much about breaking her and she is one of the best huggers though very kindly she says mine are the best as I’m a human sized teddy bear and happily I haven’t yet banged her head on the ceiling.  I’m sure it normally looks something like this. 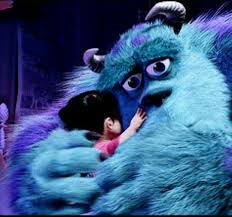 Most people won’t understand unless they too have gone 4 or 5 months without any contact but whilst others complain about things relatively high up on my ladder, having a hug is the most important thing in the world.

We pretty much hugged each other to exhaustion so she had to have a cigarette before getting back to her customers and I needed a cup of tea.  Sometimes I look over or ask her husband who is as equally laid back about life as I am and he just says “hug away, it saves me a job!”

Just as others think fondly of a nice meal or sitting in the sun, I will think of that hug until the next time… well actually the time after the next time as I got one when I left a few hours later. I stayed about 2 hours soaking up the atmosphere, making customers laugh and getting randomly prodded, patted and squeezed.

I’m quite hoarse today as I’ve probably only said 100 sentences in total these last 4 or 5 months since.   Good job I’m too shy to do video blogging!  So as everyone goes out protesting or getting drunk or overcrowding beaches or complaining about something they don’t like, just remember there are still just a few people even in a country such as this who have waited 4 months just to have a simple hug to receive any level of joy. As they say where I come from; everything else is just gravy.

I am a writer and traveller with a penchant for history and getting off the beaten track. With several books to my name including a #1 seller, I also write environmental, travel and history articles for magazines as well as freelance work. Recently I've appeared on BBC Radio and Bloomberg TV and am waiting on the filming of a ghost story on British TV. I run my own private UK tours company (Ye Olde England Tours) with small, private and totally customisable guided tours run by myself!
View all posts by Stephen Liddell →
This entry was posted in Life and tagged Coronavirus, Coronavirus Diary, Diary, Fawlty Towers, Friends, Hugs, Life, Self isolation, Social Distancing. Bookmark the permalink.