When I was out in London last week, I went on a walk of discovery.  As is often the way in London, I ‘discovered’ several places but also got the chance to visit somewhere I knew perfectly well even though I’d never been there… at least not for 6 or 7 years and never to have a proper nose around.

I’ve seen the church of St Mary Somerset thousands of times from the side view as one can observe it near the northern approach to the Millennium Bridge.  This isn’t your typical church though, in fact it’s not really a church at all anymore and for once it isn’t due to Great Fires, plagues, the Luftwaffe or modern day terrorists but Victorian urban planners and their fantastic engineers.

Mary is obviously a very popular name for a church and even in the square mile of the old City of London there were 14 churches so named before The Great Fire of London with just 6 being rebuilt afterwards.

After the Fire, the parish was combined with that of St Mary Mounthaw, which was not rebuilt. Building of the new church began in 1686 (one of the last 5 of the 51 to commence) and stopped in 1688 owing to the financial uncertainty associated with the Glorious Revolution. Rebuilding recommenced the next year and the church was finished in 1694, at a cost of £6579.

The parish was very poor, and it was one of only two churches (the other being St. Andrew-by-the-Wardrobe) for which Wren provided funds for the furnishings from the Coal Tax. The rebuilt church was smaller than its predecessor, as a strip of land was taken by the City to widen what was then Thames Street. 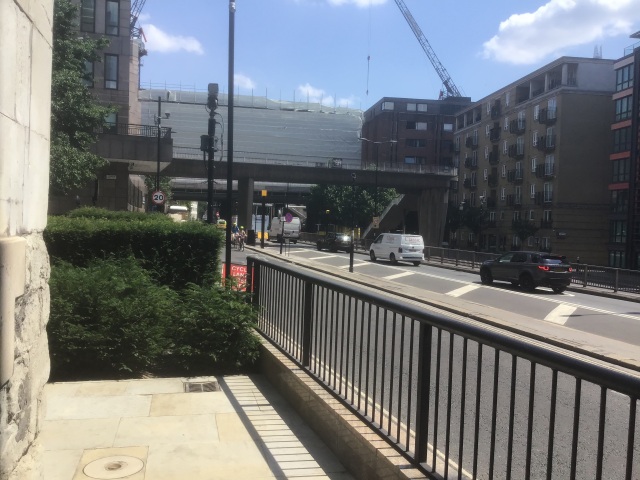 Upper Thames Street today… once where the churchyard was and before that the bank of the River Thames.  You can tell by how flat it is as there is a steep slope just out of view to the left.

Late in the eighteenth century, the church had a reputation as Low Church, as Malcolm in London Redivivum (1803) stated ‘When I mention that the late well-known Methodist Mr Gunn was a preacher in it on certain days, the trampled and dirty state of the church will not be wondered at.’   As if to re-inforce that view, in 1805, the communion plate was stolen and never recovered.

The second half of the 19th century saw a movement of population from the City of London to suburbs in Middlesex, Kent, Essex and Surrey. This left many of the city churches with tiny congregations, while many of the newly built suburbs had no churches. The Union of Benefices Act 1860 was passed by Parliament, permitting the demolition of City churches and the sale of land to build churches in the suburbs. The last service at St Mary Somerset was held on 1 February 1867, with about 70 people attending. The parish was then combined with that of nearby St Nicholas Cole Abbey, and the church demolished in 1871.

The door is so huge it was impossible to even fit in a photo given there is only a small space between it and the normally very busy road.

In this case I think it was a Fait Accompli as the authorities were once again expanding Thames Street which all ready was right up against the churchyard and to think a thousand or two years earlier, the river would have reached this point.

At the instigation of the architect, Ewan Christian, the church tower was preserved. though for sometime as a rest room for ladies.  The remaining parts of the building were demolished but not before the fixtures and fittings could be sold or rescued with the proceeds going to build a new St Mary church in Hoxton. 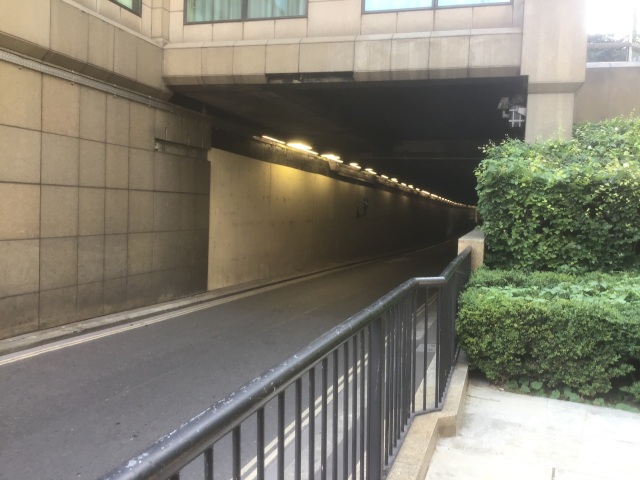 One of the tunnels…. this one actually goes under where a castle used to be.  Every one only thinks about the Tower of London but we know differently 🙂

Today the steeple is surrounded by a small garden on quite a steep slope and right next to busy Upper Thames Street and its tunnel and as far as I can tell is now a private home.

The tower is 120 feet tall (about 40 metres) so it stands out and it is hard to imagine how in the middle ages, Brabant weavers from what is now the Netherlands used to congregate here on the shores of the Thames as they waited to be hired for work. 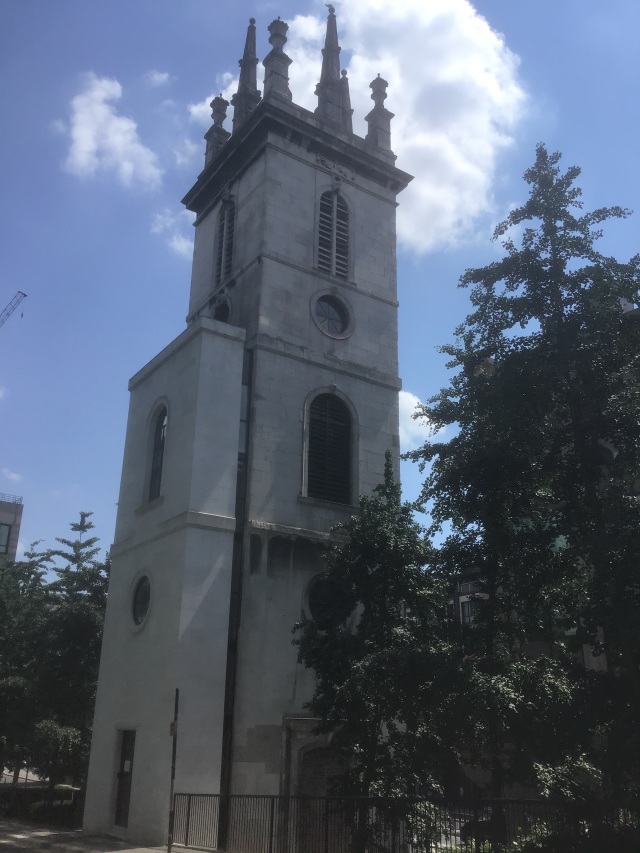 The church of St Mary Somerset as it is now, converted into a home.

This isn’t the only church steeple in the City of London that has been converted into a private residence.  There is one that is actually right in the middle of a road but that is for another post.

I am a writer and traveller with a penchant for history and getting off the beaten track. With several books to my name including several #1 sellers. I also write environmental, travel and history articles for magazines as well as freelance work. I run my private tours company with one tour stated by the leading travel website as being with the #1 authentic London Experience. Recently I've appeared on BBC Radio and Bloomberg TV and am waiting on the filming of a ghost story on British TV. I run my own private UK tours company (Ye Olde England Tours) with small, private and totally customisable guided tours run by myself!
View all posts by Stephen Liddell →
This entry was posted in Architecture, history, Life, Travel, Ye Olde England Tours and tagged church, churches, City of London, London, Secret Gardens of the City of London, St Mary Somerset, Upper Thames Street, Victorian. Bookmark the permalink.

1 Response to The forlorn church of St Mary Somerset