I’m continuing my self-isolation which is probably a good thing as typically for my luck, the streets and neighbouring villages around where I live have the highest Covid mortality rate in the whole-country per head of population.

The walls all being made out  of very solid stuff he was forced to use various heavy grinders and all sorts to cut channels out to install wiring for me to have extra plugs and lights.   As usual the jobs that were thought to be the most difficult were easy and then every now and then there were weird setbacks.

You never want to hear your electrician say “I’ve never seen that before”.   Know how the bathroom was before it was remodelled, I had no idea what this particular issue was… maybe something complicated?  As it happened it was very obvious but quite how it happened is just one of those weird things about this lovely old house.

Tar on the light

As you can see from the photo above, there was melted roof tar on the light.  How and when it got there, we have no idea.  Was it when the roof was put on, when it was patched up or maybe someone used a bulb that was too hot.  Most likely it will be some inconvenient disaster in the waiting which I am blissfully unaware of until something weird happens.

Whilst I went to be socially distant in the garden, I went to plant a bush that a neighbour had given me.  I dug my spade down and heard a clunk and it didn’t seem to be any building rubble or whatever else you can sometimes find in a garden.   I cleared away the soil to find this.

I’ve been told there is a long lost ancient well in one of the gardens around here but now doesn’t seem the right time to investigate too much.  Two roads away from here in the 1930’s they found some Roman roadway; that would be kind of fitting to make my own garden into a tourist attraction.

I’d really like to find a WW2 Anderson Shelter which is a home made air-raid shelter partially or wholly buried in the garden with soil, lawn or concrete on top.  I don’t think I will be that lucky but for now I covered it all up and buried my bush a spade breadth away.

With the house electrics now working perfectly, I can now use my kitchen more fully.  The microwave doesn’t lose power after 4 or 5 seconds and once dead sockets are now full of life.  And so today I used my slow-cooker for the first time and made a homely stew of sorts.  The meat is pork cheeks; I can’t ever say I have had them before but I didn’t buy them and I’m not fussy.  They do look like cheeks but not in such a bad way as Sheeps ear looks like ear or pig trotters look like trotters.

My father used to like tongue which always seemed to look a bit unnervingly like the tongue of a cow.  I’m not sure why out of all the parts of a huge cow one would opt for that.

All of which just made me think of how on growing up, I was always told how lucky I was as life was so much tougher during the war.  None of my friends were ever told this, maybe everyone else breezed through the 1940’s.  Funnily it was only people who were older but never lived through the war who said that.  The actual people who fought in the war never brought it up.

It’s a little bit bitter I think and usually to do with food or sometimes toys  I can’t imagine telling people in 20 years time how lucky they are because they didn’t sit on the floor for 6 months without furniture.  Or lamenting to a frustrated 20-something when they can’t go outside for a day as the weather is bad that they don’t know what it is like to have been inside from February to June.

I think I shall retrospectively invoke that to everyone who had such a surly attitude to me in the 1980’s and besides my gluten and dairy intolerances mean my diet is often much more restricted than rationing was. 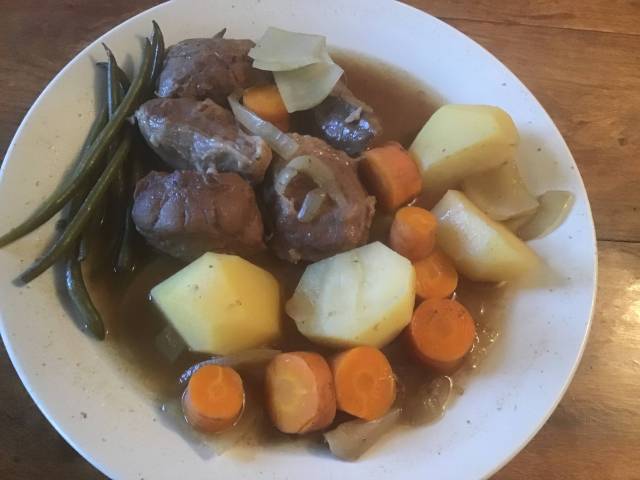 Enough with the gripes, this was delicious. And yes I did double and triple check the packaging on the meat to make sure they were cheeks and not something that only male pigs have.  Mind you how many male pigs have 4 of those?  I’m not 100% sure but I know not many pigs have 4 cheeks. Hhhmmmm.

I am a writer and traveller with a penchant for history and getting off the beaten track. With several books to my name including a #1 seller, I also write environmental, travel and history articles for magazines as well as freelance work. Recently I've appeared on BBC Radio and Bloomberg TV and am waiting on the filming of a ghost story on British TV. I run my own private UK tours company (Ye Olde England Tours) with small, private and totally customisable guided tours run by myself!
View all posts by Stephen Liddell →
This entry was posted in Life and tagged Coronavirus, Coronavirus Diary, Diary, food, garden, Life, ruins, WW2. Bookmark the permalink.