One of the things about self-isolating when you’re on your own is that there are very limited opportunities to speak and fewer still that anyone might answer back.   Yesterday I went to my front door and daringly opened it.

There weren’t many people about even by curfew standards.  The little school opposite me remains open to allow parents who are classified as key-workers such as in the NHS, food and deliveries industries to cary on going to work.  Usually the playground and fields are swarming with children and little voices but now there are just a handful and somedays not even that.

I waited and waited and finally a dog walker happened by but when they saw me standing at the door they crossed over the road and continued on the other side.   10 minutes later and something very similar happened.

I thought this to be odd as people generally walk in the middle of the empty roads when they meet walkers coming the other way, let alone someone standing in their own house.  Then I realised that these must be regular walkers and they have seen my eye-catching warning poster and they must be doing their bit to protect my lungs!

Abandon hope, all ye who enter in.

Realising I wasn’t going to be able to speak to anyone I headed back to my kitchen.  Ever since I moved in exactly 2 months ago, my washing machine tray has been filling with water in the area you’d normally put softener in.   No-one could understand why, even the plumber who has been working on the house pipes and shower didn’t know what to make of it.

Whilst I was rummaging in the fridge looking for something to eat I came across a discarded piece of white plastic hidden at the base of one of the shelves.  I noticed it a month ago but couldn’t find where it had fallen off from so I’d left it where it was.     Obviously my self-isolation levels of boredom have sky-rocketed in the intervening weeks and I had the brainwave of seeing if it fits in the washing machine and it precisely fits in the problematic flooding tray.

Why anyone would put a washing machine tray part in the bowels of their fridge I am not entirely sure.  I only hope it won’t become evident when I next wash something.   I still haven’t even tried the dishwasher; I think that can wait until after the lockdown.

It’s not just me making progress, the NHS today opens the largest intensive care unit in the world just over a week from when plans were drawn up.  Two months ago people were amazed that China managed to build a new hospital from scratch in just 4 or 5 days and as usual everyone said nothing similar could happen here but of course it has… in someways not as big an achievement and in others bigger.

HMS Nightingale has been created out of the epic London Excel Centre  and will be dedicated to those suffering from the worst effects of the Coronavirus.   Equipment has been trucked in and even the RAF has been flying in to neighbouring and temporarily closed London City Airport and transporting the necessary materials.

It just shows what can be done if people actually put their mind to it rather than dilly-dally with bureaucracy.  For a task this big and this urgent of course only the Ministry of Defence would do and at times hundreds of soldiers along with carpenters, stewards, NHS staff and countless volunteers have been working all week creating a hospital out of nothing on an almost unimaginable scale with even the oxygen supply piping being 4 miles long.

The operation has been overseen by a veteran Army Medical Services of the Iraq and Afghanistan wars and various humanitarian responses to disasters around the world, Colonel Boreham.  He said: “We came together about nine days ago, sat around, with social distancing, a coffee table and looked at the designs of this facility and building.   There will be over 80 wards with 42 intensive care beds in each one.

“This corridor is one-kilometre long. And there are two wards like this. When it is all up and running there will be capacity for 4,000 patients.

“We looked at how to re-purpose it into a design of a hospital system so it has a patient-flow system.

“You literally design on a piece of paper what it looks like with the engineers and the NHS.  You then present that and you’ve got a plan. Once you’ve got that and a timeline you can start to finesse it.

“We can do that around the world and do the same thing here, literally bent over a table working it out. That’s your start point.”

“I’m from London, I have friends and family in London,” said Col Boreham, who is the head of the medical advisory and mentoring team helping the NHS.  Many of the people working here, many of the soldiers working here, are from London. It is very personal, it cannot be anything else.  It focuses the mind, and that is why you have everyone pulling together, there is one common purpose. You are saving people’s lives.” 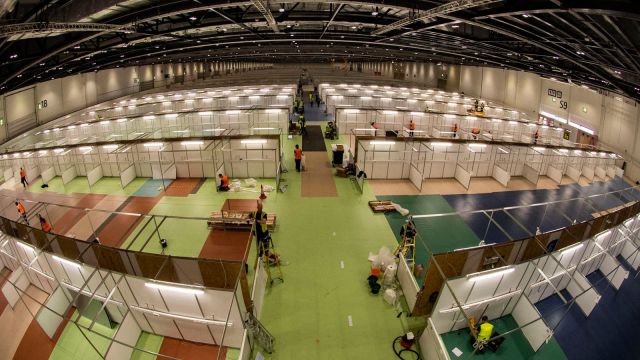 Photo from the Ministry of Defence

Up to 16,000 staff will be required and no doubt some of the nearly million volunteers who have signed up to help the NHS in whatever way they can.

It is a quiet incredible achievement and great news but of course the best news possible will be when the last patient walks out and it all closes down.

I am a writer and traveller with a penchant for history and getting off the beaten track. With several books to my name including several #1 sellers. I also write environmental, travel and history articles for magazines as well as freelance work. I run my private tours company with one tour stated by the leading travel website as being with the #1 authentic London Experience. Recently I've appeared on BBC Radio and Bloomberg TV and am waiting on the filming of a ghost story on British TV. I run my own private UK tours company (Ye Olde England Tours) with small, private and totally customisable guided tours run by myself!
View all posts by Stephen Liddell →
This entry was posted in Life, London, News and tagged Coronavirus, Coronavirus Diary, Corvid19, Diary, ExCel, NHS, NHS Nightingale, Self isolation, Self Quarantine, Social Distancing. Bookmark the permalink.