Why our trains are on the wrong track?

I should be living around 35-40 minutes from the centre of London using public transport.  As the years go by it is becoming less reality and more theoretical.  In fact it can often take me 2-2.5 hours each way and it only seems to be getting progressively worse.

One thing people are always happy to tell you when sat on the train is how reliable they are and how inexpensive the tickets are and just what a pleasant journey it is.  Actually, those are complete lies as obviously very few people get to sit on the trains and I’ve never heard anyone say any of these things.

So far this summer only two one-way journeys have gone without a hitch with my once every 10 minutes bus often not turning up for 40, 50, even 90 minutes and that is before I have left my front street.

So you can imagine how happy we all are to learn that rail fares are set to rise again by as much as 2.8 per cent.  Since WW2, the country that invented trains had a nationalised but integrated system which was privatised and largely done away with in the 1990’s by the John Major government.  It’s notable that John Major is only known for being the successor to Mrs Thatcher, for being Grey and boring, for having an affair with his minister whilst proclaiming traditional values and for messing up the trains.  As such  the debate over whether the UK should renationalise the railways has been ongoing for about 25 years now.

It would be hoped that amongst other things, denationalisation would lead to lower ticket prices as opposed to amongst the highest prices for the most overcrowded and understaffed systems.  The trains are mostly run by private companies and they are subsidised by taxpayers as it was quickly found that it is almost impossible for train companies to make a profit, doubly so when maintaining, improving and expanding upon the oldest and possibly most densely packed system in the world.

However, a significant proportion of the UK’s railways already are under state control, with Network Rail in charge of around 75 per cent of the industry, including the tracks, thousands of stations and signalling operations.  These bits being the expensive parts that make no money from the fare paying customer.

But what of the train operators? There are over 20 operators of franchised passenger services, and discussions about renationalising the railways generally concern returning control of these services to the state. But interestingly, almost all of these operators are (at least partly) state-owned already – only not by the British state. 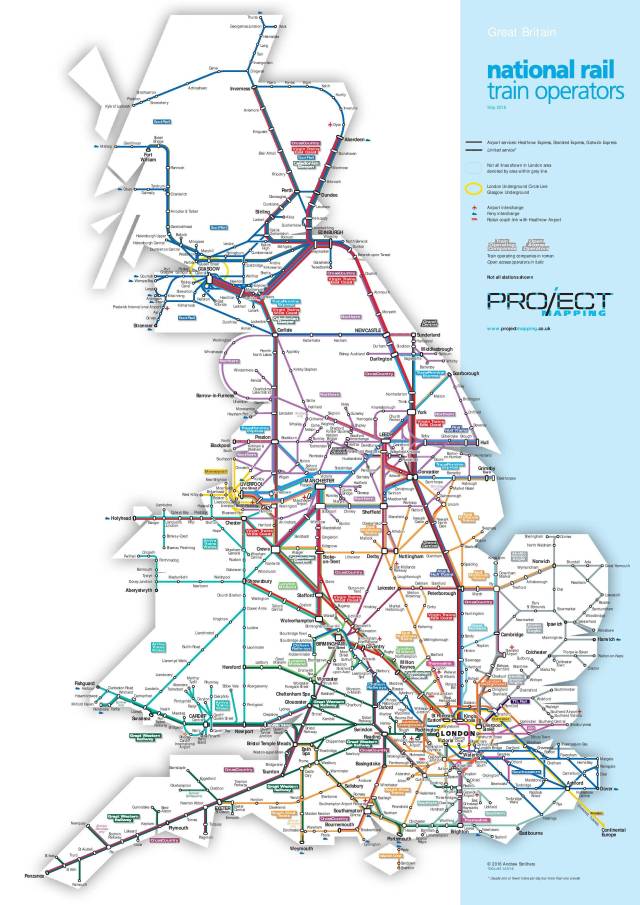 The above map is by no means a complete map of the many thousands of stations but it shows the main routes and even from this, one can see just how chaotic it is.  Everything is chaotic from booking cheap tickets to working out what platform your train is departing from. Every different coloured line is operated by a different organisation.

It is worth noting that several operators have the same parent companies behind them. Huge companies like Arriva UK Trains, Abellio and Govia run several operators.  For example, Govia runs Thameslink, Southern, Great Northern and Gatwick Express. The firm is a joint venture between Go-Ahead group and French company Keolis, which itself is 70 per cent owned by the French National Railways Corporation.

Meanwhile Arriva UK Trains is behind the operators, Chiltern, CrossCountry, London Overground, Grand Central, and Northern. In total it runs around a quarter of all British train operating companies, and is part of German firm Deutsche Bahn, in which the German state is the biggest shareholder.  Whilst Abellio is wholly owned by the Dutch national railways company Nederlandse Spoorwegen.

Private firm Virgin will no longer run the West Coast Mainline from December this year and the service will be run by a group consisting of the Italian state railway Trenitalia and private UK company First Group.

In many nations national infrastructure is not open to foreign organisations and what seems to be the case in the UK with transport at least is that they overcharge and provide a terrible service with profits going to provide a cheap and often better service at home.  One can complain all you want but nothing happens, no-one cares as really why would someone in Berlin or Rome give two figs for the downtrodden commuter in London or Manchester?

Of course the foreign companies are only partly to blame, perhaps morally rather than legally as the main issue is with successive British governments of all political persuasions who are happy to allow their citizens to be treated and exploited in this fashion but for the record here is the list of who runs British Rail.

What’s interesting is that the only network which is always reliable and widely praised is London Underground which is locally run and locally accountable.  Quelle Surprise!

With rail prices expected to rise, and large amounts of planned disruptive infrastructure upgrade work also costing the taxpayer billions, it is unlikely the calls for UK state ownership of rail companies are going to die down soon.

Until that time it seems likely that my arrival and departure from London Euston station every day is going to be like this.  Thankfully no matter who distantly the managers are who run our trains may be, we customers still are world-beaters at queuing.  Perhaps though just a teeny bit of civil disobedience might get someone to do something because I can’t be the only person who is fed up of paying around £5,000 a year to have a hit and miss system, ancient and overcrowded system that has me spending up to 5 hours a day just to go to work and back all of 18 miles away.

I am a writer and traveller with a penchant for history and getting off the beaten track. With several books to my name including a #1 seller, I also write environmental, travel and history articles for magazines as well as freelance work. Recently I've appeared on BBC Radio and Bloomberg TV and am waiting on the filming of a ghost story on British TV. I run my own private UK tours company (Ye Olde England Tours) with small, private and totally customisable guided tours run by myself!
View all posts by Stephen Liddell →
This entry was posted in Life, London, News, Opinion, Travel and tagged Arriva Buses, London, London Euston, London Underground, Nationalisation, Overcrowding, Privatisation, Public Transport, Trains. Bookmark the permalink.

5 Responses to Why our trains are on the wrong track?