Last week I mentioned in a post about the vandalism of a number of memorials in London which made me realise that I should actually write a positive post about one of them in particular,

The Royal Air Force Bomber Command Memorial is a memorial in Green Park, London, commemorating the crews of RAF Bomber Command who embarked on missions during the Second World War. The memorial, located on Piccadilly near Hyde Park Corner, was built to mark the sacrifice of 55,573 aircrew from Britain, Canada, Czechoslovakia, Poland and other countries of the Commonwealth, as well as civilians of all nations killed during raids.   Queen Elizabeth II unveiled the memorial on 28 June 2012, the year of her Diamond Jubilee.

Serving in Bomber Command was possibly the most dangerous and deadly thing to do in active service in WW2 with 44.4% of the airmen involved being killed, usually over Germany.

The controversy over the tactics employed by RAF Bomber Command during the Second World War meant that an official memorial to the aircrews had been delayed for many years. Despite describing bombers as “the means of victory” in 1940, British prime minister Winston Churchill did not mention Bomber Command in his speech at the end of the war.

The Bomber Command Memorial is perhaps my favourite war memorial in London, if it is possible to have such a thing.  It’s an incredibly beautiful and moving spot but why did it take until 2012 for it to be installed?   Despite their unmatched bravery and countless missions impossible, many of the missions over Germany involved not just the destruction of German military and industrial targets but also the mass bombing of German cities in the full knowledge this would kill civilians and particularly those of the German city of Dresden.

Beginning on the night of February 13, 1945, more than 1,200 heavy bombers dropped nearly 4,000 tons of high-explosive and incendiary bombs on the city in four successive raids. An estimated 25,000 people were killed in the bombings and the firestorm that raged afterward. More than 75,000 dwellings were destroyed, along with unique monuments of Baroque architecture in the historic city center. The scale of the death and destruction, coming so late in the war, along with significant questions about the legitimacy of the targets destroyed have led to years of debate about whether the attack was justified, or whether it should be labelled a war crime.

Of course, this was in response to the Nazi initiated bombings of almost every British town and city with Coventry in particular being almost wiped off the map.  It was by no means a universally popular tactic even at the time but in a fight to the death with a ruthless enemy, Churchill decided it was warranted if it would bring the war to a swifter conclusion. In effect, it was a necessary evil but for decades after the men of Bomber Commander was consistently overlooked despite everyone knowing that no group did more for the war effort than they.

It took until the 21st Century for nn appeal to be made for £5.6 million to build the memorial, and funding came from donations made by the public, as well as substantial amounts from Lord Ashcroft, businessmen John Caudwell and Richard Desmond. Robin Gibb, the singer from the Bee Gees became a key figure behind the appeal, working alongside Jim Dooley to raise funds and have the memorial built. Liam O’Connor designed the memorial, built of Portland stone, which features a bronze 9-foot (2.7 m) sculpture of seven aircrew, designed by the sculptor Philip Jackson to look as though they have just returned from a bombing mission and left their aircraft. 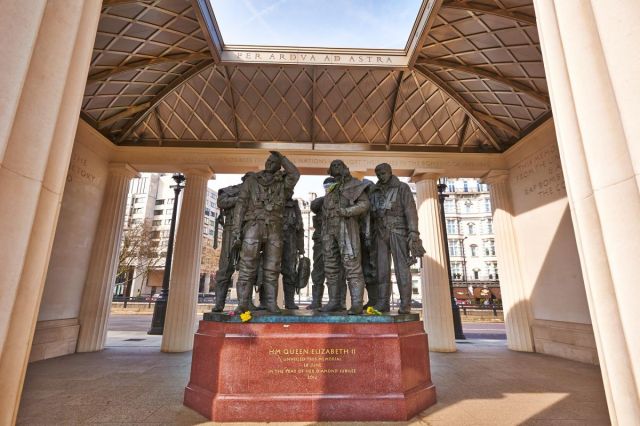 The inscription on the roof of the memorial is the motto of the RAF… Per Ardua ad Astra; Through Adversity to the Stars

Aluminium from a Royal Canadian Air Force Handley Page Halifax of No. 426 Squadron that had crashed in Belgium in May 1944 was used to build the roof of the memorial, which was designed to evoke the geodetic structure of the Vickers Wellington. The Halifax, LW682 OW/M, had been removed from a swamp in 1997 with three of the crew found still at their posts. They were buried with full military honours in Geraardsbergen and the remains of the aircraft were sent to Canada. Some of the metal was used for the restoration of a Halifax in Trenton, Ontario, and the rest was melted down by the Bomber Command Museum of Canada in Nanton, Alberta. The Museum provided ingots for the memorial to commemorate the 10,659 of 55,573 Bomber Command aircrew killed during the war that were Canadian.

The plinth of the memorial is inscribed with the following text by Pericles: “Freedom is the sure possession of those alone who have the courage to defend it.”

There had been controversy in the lead-up to the official opening, with a lack of forthcoming funds to pay for the projected £700,000 cost of the ceremony. A number of veterans put forward their own money as security for the event, making them liable for the costs if donations did not cover the total. The Ministry of Defence drew criticism for not providing any money, in particular the Defence Secretary, Philip Hammond, who would be attending. A number of veterans had also missed out on applying for tickets in the early stages, although many other parties returned theirs to allow them to attend. Queen Elizabeth II officially opened the memorial on 28 June 2012, unveiling the bronze sculpture. The ceremony was attended by 6,000 veterans and family members of those killed, and the Avro Lancaster of the Battle of Britain Memorial Flight dropped red poppy petals over Green Park.

6,000 people assemble for the official opening of the Bomber Command Memorial in 2012.

In October 2012 it was reported that some of the trustees of the charity set up to fund the construction and opening of the Bomber Command Memorial would be liable for a shortfall of £500,000. In May 2013, less than a year after its unveiling, the memorial was vandalised. The word ‘Islam’ was spray-painted on the Bomber Command Memorial and also on the Animals in War Memorial nearby and since then the memorial has been damaged on a number of occassions.

In March 2015, Les Munro, one of the last surviving members of the Dambusters Raid, intended to sell his war medals and flight logbook at auction to raise funds for the upkeep of the RAF Bomber Command Memorial. The auction was pulled after Lord Ashcroft donated £75,000 to the Royal Air Force Benevolent Fund towards the upkeep, with a further NZ$19,500 donated by the Museum of Transport and Technology in Auckland, New Zealand, where the medals will go on display. Munro died a few months later in August 2015. 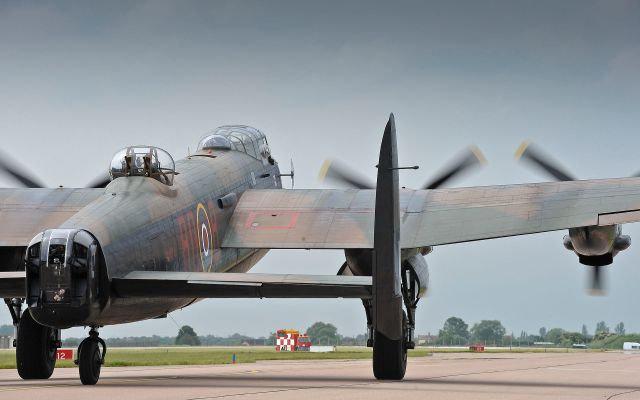 If you have a few minutes to spare and you’re near Buckingham Palace or the West End then it’s well worth visiting the Bomber Command Memorial or you can join me on my War Memorials of London Walking Tour with Ye Olde England Tours.

When I did my most recent memorial talk on Armistice Day in 2018, I was sure to make mention of the deaths incurred for all nations, friend and foe alike, something I’d never witnessed before in those 40 odd years that I have witnessed since the centenary of the end of WW1.  I was glad that I judged the mood correctly and everyone present thought it the right thing to do.

Similarly with this  beautiful and thoughtful memorial, it’s not just to these brave men of the RAF but also a reminder of the horrors of war that civilians faced too and why everything possible should be done so that similar events never have to happen again and that’s just one of many reasons why it is wrong to vandalise this or any other war memorial.

I am a writer and traveller with a penchant for history and getting off the beaten track. With several books to my name including several #1 sellers. I also write environmental, travel and history articles for magazines as well as freelance work. I run my private tours company with one tour stated by the leading travel website as being with the #1 authentic London Experience. Recently I've appeared on BBC Radio and Bloomberg TV and am waiting on the filming of a ghost story on British TV. I run my own private UK tours company (Ye Olde England Tours) with small, private and totally customisable guided tours run by myself!
View all posts by Stephen Liddell →
This entry was posted in Uncategorized. Bookmark the permalink.