Almost directly across the road from Bunhill Fields Cemetery  which I wrote about last week is Wesley’s Chapel which can be considered as the mother church of Methodism and so I thought I would take a look.

I’m not a Methodist but I have an interest in most religions and notable people and there are few people more notable or worthy than John Wesley.

Methodism began as a renewal movement within the Church of England. It’s beginnings are associated with the work of John and Charles Wesley, both of them Anglican clergymen who were so diligent and methodical in their religious life whilst students at Oxford University, that people called them mockingly ‘Methodists’.

Both men were converted in May 1738 and soon they established themselves in the Foundery, a ruined ordnance factory on the edge of the City of London. John Wesley, at the instigation of his friend George Whitfield, had begun speaking in the open air. This brother was soon putting Methodist theology and spirituality into the form of hymns. Methodism was in the process of being born.

The simple and accessible way in which the Wesleys and their followers preached and exemplified the Christian life attracted thousands of followers. The doctrine which was preached from the pulpit and sung lustily by those early congregations centred upon the universality of God’s grace and the need for all believers to grow in love towards that perfection which is God’s goal for all people. This teaching was accompanied by practical action too – healthcare, micro finance, a ragged school, prison visiting, and literacy.

When the Foundery lease ran out, the building we now know as Wesley’s Chapel was constructed and opened in 1778. By then, there were Methodist meeting houses across the whole of the United Kingdom.

I visited on a sunny but freezing afternoon two weeks before Christmas and as you can see in the final photo, the sun was already going down just before 3pm. 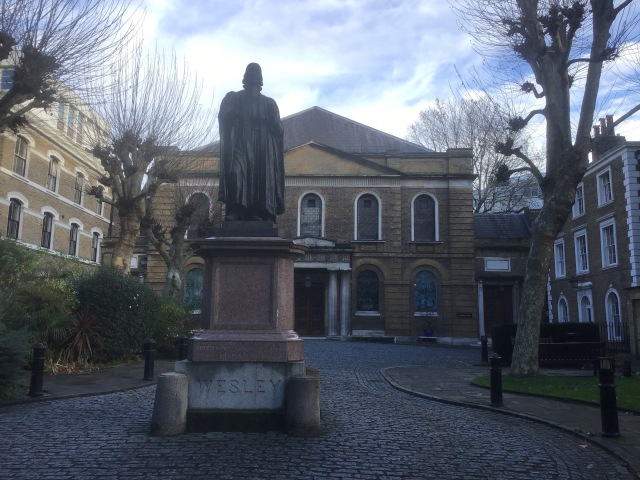 A statue of John Wesley

Inside the Chapel, I always like the style of Methodist churches. 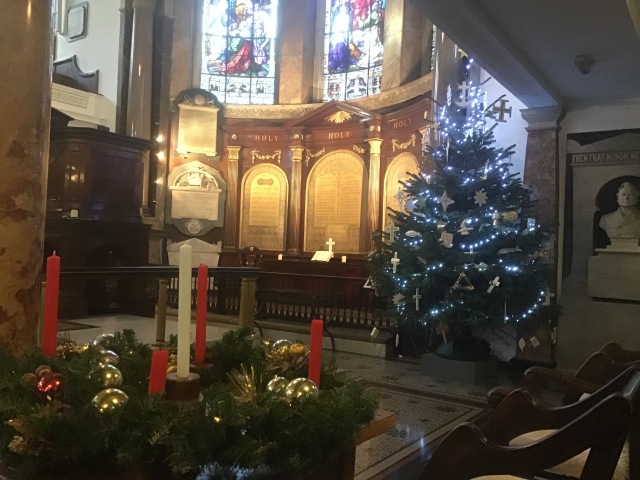 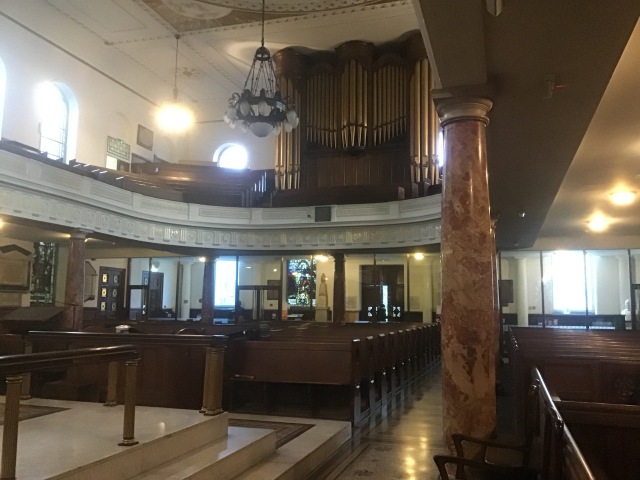 The beautiful columns were installed a century after the death of John Wesley, replacing old oak beams that King George III had donated from various old Royal Navy ships.

As well as the chapel you can visit the house of John Wesley and associated museum.  Sadly I was running low on time but will have to return soon as I would like to create a new Methodist Walking Tour.

Nevertheless, I made my way to the rear of the chapel to the graveyard.  Like the chapel itself, it is quite small and simple as I think is largely the Methodist way.

There are a number of notable tombs here but of course the first amongst equals here is that of John Wesley himself.

If you have an interest in visiting old and sometimes ruined churches in London then you might want to come on my tour My new tour – Sacred, Secret, Gardens of London with Ye Olde England Tours.

I am a writer and traveller with a penchant for history and getting off the beaten track. With several books to my name including several #1 sellers. I also write environmental, travel and history articles for magazines as well as freelance work. I run my private tours company with one tour stated by the leading travel website as being with the #1 authentic London Experience. Recently I've appeared on BBC Radio and Bloomberg TV and am waiting on the filming of a ghost story on British TV. I run my own private UK tours company (Ye Olde England Tours) with small, private and totally customisable guided tours run by myself!
View all posts by Stephen Liddell →
This entry was posted in Heritage, history, Life, London, Religion and Faith, Travel, Ye Olde England Tours and tagged church, John Wesley, Methodism, Methodist Chapel, Wesley's Chapel. Bookmark the permalink.

6 Responses to Wesley’s Chapel – The Mother Church of Methodism.