Amiens and The Hundred Days Offensive

This week marks the centenary of one of the pivotal but less known battle of the Western Front in WW1, Amiens and the more broadly labelled 100 Days Offensive.

The Western Front is often categorised as being a static war with little or no progress made by either side despite major attempts costing too many lives. However, the generals on both sides did eventually adapt to the times.

More importantly advances in technology, especially the invention of the tank made things a lot more flexible during 1917 and with the imminent arrival of the Americans, Kaiser Wilhelm decided to make a big push in the spring of 1918 utilising the almost 50 additional divisions freed up by the treaty with Russia. The hope was that Germany could overwhelm the Allies before their reinforcements arrived from across the Atlantic and involved outflanking the British and defeating them before forcing France to sue for peace.  It was known on both sides that having secured American entry into the war, once their large and fresh forces arrived that Germany may still not lose the war, they would never be able to win.

On 21st March 1918, Germany opened Operation Michael. The Germans made some major advances as the British concentrated their forces around vital areas such as the Channel Ports and Amiens leaving other areas lightly defended. The Germans made such progress that they had problems supplying their advancing army and their storm- troopers who for the sake of mobility could only carry a few days supplies and so couldn’t sustain themselves resulting in the advances faltering. The Germans had captured large amounts of tactically worthless land and suffered so many casualties that it wouldn’t be easy for them to hold it in the event of a counter-attack.

Using new tactics and weaponry in August 1918, the Allies began what is known as the Hundred Day Offensive when the Allies repeatedly pushed the Germans back all the way out of France. Some of the German positions had been weakened even more by the Australian tactic of “Peaceful Penetration” wherein they would raid across no-mans land and capture German outposts, taking the German soldiers prisoners.

The Battle of Amiens on the 8th August involved 10 divisions of troops supported with 500 tanks. Having achieved complete surprise, the British Fourth Army broke through the German lines with tanks reaching even their rear positions. It created a 15 mile gap in the German lines south of the Somme and German General Ludendorff labelled it the “Black Day of the German Army” due to 30,000 being killed and 17,000 being taken prisoner not to mention all of the heavy equipment that was captured by the Allies. Having lost about 12 miles of territory, the Germans withdrew from many of the positions they won in the spring offensive. 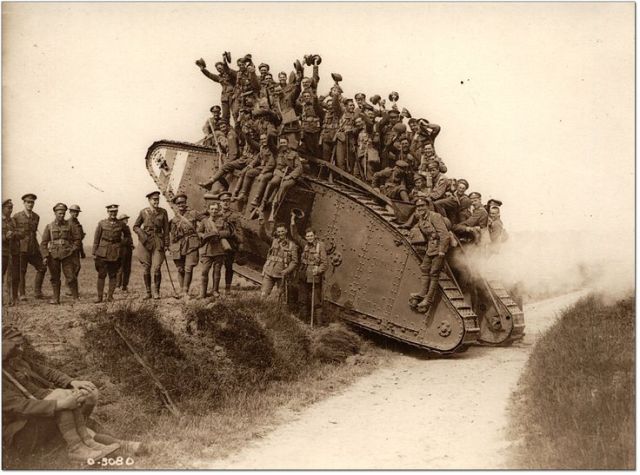 Triumphant British soldiers for once having something to smile about.

Despite French urging, General Haig paused before launching another fresh offensive on 21st August with the Battle of Albert which captured the town and pushed the Germans back another 34 miles. The British widened their scope of attack as did the French and gains were made over a large area of the front. East of Amiens, the British continued the fight and along with the French pushed the Germans back to the Hindenburg Line by mid-September.

The Hindenburg Line was a long chain of German defensive fortifications and on 26th September, French General Foch launched his ‘Grand Offensive’ with the support of the American Expeditionary Forces. Two days later a Belgian- backed British offensive saw the Fifth Battle of Ypres take place in Flanders. Despite the deteriorating morale and conditions of the Germans, it still took until early October until the Hindenburg Line was broken.

The Battle of Cambrai saw 3 British Armies and Canadians troops utilise tanks and air-support to quickly overwhelm the Germans with relatively low losses themselves. This collapse forced the German High Command to realise that the war had to end and quickly. The Allies also realised that rather than prepare for a big push into Germany in 1919, the war could end a great deal sooner.

The first day of the offsensive was labelled by German commander Erich Ludendorff as being a ‘Black Day For The German Army’.  For the first real time signicant territory was being taken by the Allies and with the German military being emasculated through casualties and large numbers of men being captured along side growing unrest and near starvation at home, the being of the end of the war to end all wars was just possibly on the horizon. 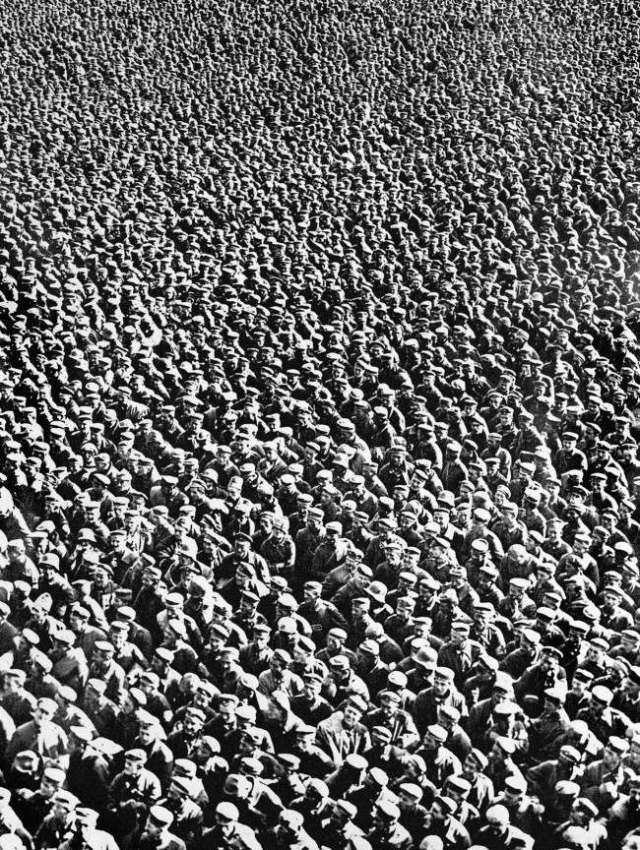 Just a few of the thousands of capture German prisoners.

If you enjoyed this post there are plenty others like it on my blog which are edited ectracts of my WW1 history book, Lest We Forget.  Lest We Forget is an easy to read guide to WW1 and is only 122 pages long.  Those 122 pages, however, cover pretty much the entire war as you can see from the chapter titles below.

I am a writer and traveller with a penchant for history and getting off the beaten track. With several books to my name including several #1 sellers. I also write environmental, travel and history articles for magazines as well as freelance work. I run my private tours company with one tour stated by the leading travel website as being with the #1 authentic London Experience. Recently I've appeared on BBC Radio and Bloomberg TV and am waiting on the filming of a ghost story on British TV. I run my own private UK tours company (Ye Olde England Tours) with small, private and totally customisable guided tours run by myself!
View all posts by Stephen Liddell →
This entry was posted in history, writing, WW1 and tagged Amiens, First World War, Lest We Forget, The Hundred Days Offensive, war, Western Front, World War 1, WW1. Bookmark the permalink.

1 Response to Amiens and The Hundred Days Offensive