Buffy The Vampire Slayer! – Don’t ruin the legacy with a remake.

Like several other people trying to forget about big issues in the world, this weekend allowed some of us to become pre-occupied with a small one…. they want to remake Buffy The Vampire Slayer!

At its heart was Buffy – a Californian teenager who goes to high school during the day and fights vampires at night. It had a kick-ass female lead, vampires and the everyday trials of teenage life.  The TV show was based on a 1992 film written by Joss Whedon.

Now, the 90’s smash is coming back and the original creator of the show is involved. The new version will feature black actress taking the title role that Sarah Michelle Gellar made famous.   Despite the return of Joss Whedon to oversee things, it is always very dangerous to remake a television show, doubly so for one that is still relatively recent and definitely so beloved.

Unlike other 90’s shows, Buffy still holds up – with its strong message of female empowerment being bang on trend. It also had killer dialogue and both was genuinely scary and funny.   Buffy had everything and I’m just one of millions of devoted fans that see it as being something a bit different and special compared to the plethora of shows that are on the airways both then and now.

No matter how serious things were, and they usually were very serious, there were always conversations or one-liners that would make me laugh.  I remember one time  after a gruesome multiple murder at a college fraternity house, a demon approvingly comments: “It’s like somebody slaughtered an Abercrombie and Fitch catalogue.”

I haven’t actually watched Buffy for a few years now but that is primarily because I’m always so busy.  It’s hard to condense Buffy into a top 5 list as really it is all about the characters and the dialogue as well as cool moments like when the mayor turns into a giant monster and devours the Principal of Sunnydale High…. who really had it coming but nevertheless, here are 5 of my favourite episodes of Buffy The Vampire.

5. Once More With Feeling

“Once More, with Feeling” is the seventh episode of the sixth season and the only one in the series performed as a musical.  It is the type of episode that can really only be done in a long-running series and one where the actors and characters are comfortable with themselves.

“Once More, with Feeling” explores changes in the relationships of the main characters, using the plot device that a demon—credited as “Sweet” but unnamed in the episode—compels the people of Sunnydale to break into song at random moments to express hidden truths. The title of the episode comes from a line sung by Sweet; once the characters have revealed their truths and face the consequences of hearing each other’s secrets, he challenges them to “say you’re happy now, once more, with feeling”.

All of the regular cast performed their own vocals, although two actors were given minimal singing at their request. “Once More, with Feeling” is the most technically complex episode in the series, as extra voice and dance training for the cast was interspersed with the production of four other Buffy episodes. It was Joss Whedon’s first attempt at writing music, and different styles—from 1950s sitcom theme music to rock opera—express the characters’ secrets in specific ways. The episode was well received critically upon airing, specifically for containing the humor and wit to which fans had become accustomed. The musical format allowed characters to stay true to their natures while they struggled to overcome deceit and miscommunication, fitting with the sixth season’s themes of growing up and facing adult responsibilities.

In this episode, The Trio summon a demon whose hallucinogenic venom makes Buffy believe that her implausible and nightmarish life as vampire slayer has actually been her own elaborate hallucination as a mental patient, catatonic in a hospital for the past six years.

Watching this episode makes you doubt the whole reality of the show and maybe even reality itself.

According to Joss Whedon, this episode was the “ultimate postmodern look at the concept of a writer writing a show”, as it questioned fantastical or inconsistent elements of the show “the way any normal person would”. Whedon added that the episode is intentionally left open to interpretation; the actual cause of the delusions, either the poison or Buffy’s return to “reality”, is not made explicitly clear. “If the viewer wants,” Whedon says, “the entire series takes place in the mind of a lunatic locked up somewhere in Los Angeles… and that crazy person is me.” Although, “Personally, I think it really happened.”

In a show that ran for almost 150 episodes and relied on demons and monsters, it was sometimes hard for the creators to keep coming up with original characters with original appearances and motivations.

After reading critical response to the series in which the dialogue was praised as the most successful aspect of the show, Whedon set out to write an episode almost completely devoid of speech. Only about 17 minutes of dialogue is presented in the entire 44 minutes of “Hush”.

In “Hush”, a group of fairytale ghouls named “The Gentlemen” come to town and steal everyone’s voices, leaving them unable to scream when The Gentlemen cut out their hearts. Buffy and her friends must communicate with one another silently as they try to discover why no one can speak and find whoever is murdering the townspeople. They must also find ways to express their feelings about each other and keep some semblance of control as the town descends into chaos.

The episode was highly praised when it aired and was the only episode in the entire series to be nominated for an Emmy Award in Outstanding Writing for a Drama Series; it also received a nomination for Outstanding Cinematography for a Single Camera Series (Michael Gershman). “Hush” addresses the limits and assets of language and communication and the disruption to society when communication breaks down. The Gentlemen are often counted as some of the series’ most frightening villains, and the episode is frequently included on lists of the best of Buffy the Vampire Slayer.

Even here as an indication of how humour is an important part of the show, having lost her voice, Buffy uses her hand to mime “stab them with a stake” but her intent is…misunderstood.

This is where it gets serious at least for this list.  In reality Buffy mixed the light-hearted and at times preposterous set-up for the show with gravity very well and there was always a mix of the two though towards the latter seasons, things got understandably more serious.

The Gift is the fifth season finale and the 100th episode of Buffy.   Every season of Buffy would have a Big-Bad and the fifth season has hell-demon Glory and her delicious fawning minion demons.

All along the year it is thought that Buffy’s newly arrived sisten Dawn who is referred to as The Key might have to be sacrificed in some way for the greater good but of course it ends up entirely different when Buffy realises what was exactly meant by her gift being ‘death’. 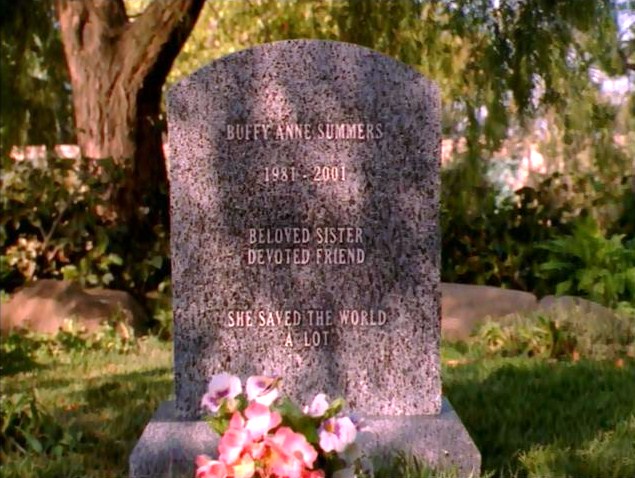 With all manner of demons emerging through it, Buffy sacrifices herself by jumping off the pylon and through the portal which then closes.  And not forgetting the dramatic actions of librarian Giles when he realises that Ben must be killed.  When Ben marvels, “She could have killed me”, Giles disagrees: “No she couldn’t. Never… She’s a hero, you see. She’s not like us.”  before smothering him to death.

I remember it being an incredibly, thrilling, fulfilling and sad episode.

In the series, Buffy Summers is a teenager chosen by mystical forces and endowed with superhuman powers to defeat vampires, demons, and other evils in the fictional town of Sunnydale. She is supported in her struggles by a close circle of friends and family, nicknamed the Scooby Gang. In “The Body”, Buffy is powerless as she comes upon her lifeless mother, who has died of a brain aneurysm.

Although Buffy and her friends deal with death every week, often in very gruesome and fantastic ways, in this episode they are bewildered by the natural death of Joyce Summers, the divorced mother of Buffy and her sister Dawn and occasionally a mother figure to their friends. They struggle to comprehend what the loss means to each of them and to the group. Buffy must begin to face her life and her duties as the Slayer without parental support and comfort. The episode was stripped of all music—a regular staple of the Buffy series—and disorienting effects were included to convey the sense of displacement and loss associated with the death of a close family member.

“The Body” aired to wide acclaim, and has since been ranked by several critics as one of the greatest episodes of television ever broadcast.

I remember watching The Body several times when it came out.  It was just terribly profound and I liked the way without any dialogue or music that it forced the characters and audience to confront head-on the unavoidable shock of an unexpected death.  I’m not the only one to say that this is the best ever portrayal of such an event on television and having gone through a very similar situation with my own mother, it sadly still rings very true.   Right down to Buffy daydreaming of a different result.  I remember 2 or 3 hours after the death of my mother thinking to myself that if Jesus or whever is going to resurrect her then now was the time.

I’m not sure when I will be able to watch this episode properly, even the clip I chose was the least affecting I could find.

So all in all, I can’t see any good reason at all why they would remake Buffy, except of course for greed and money which aren’t exactly good reasons.  I’m all for genre television so why not just make an entirely new show with new characters?

There won’t ever be anyone quite like Buffy and her Scoobies.

I am a writer and traveller with a penchant for history and getting off the beaten track. With several books to my name including several #1 sellers. I also write environmental, travel and history articles for magazines as well as freelance work. I run my private tours company with one tour stated by the leading travel website as being with the #1 authentic London Experience. Recently I've appeared on BBC Radio and Bloomberg TV and am waiting on the filming of a ghost story on British TV. I run my own private UK tours company (Ye Olde England Tours) with small, private and totally customisable guided tours run by myself!
View all posts by Stephen Liddell →
This entry was posted in Life, News, Popular Culture, television and tagged Buffy, Buffy The Vampire Slayer, Culture, Death, Fantasy, Joss Whedon, Pop culture, television. Bookmark the permalink.

10 Responses to Buffy The Vampire Slayer! – Don’t ruin the legacy with a remake.