Posted on December 4, 2017 by Stephen Liddell

If there is one thing you might have picked up on during my walk through Rotherhithe, it is that many of the old buildings and locations that were once grimy industrial buildings in unpleasant parts of London have been refurbished and re-purposed for modern use.   This walk has been good at showing this, whether it is police stations and mortuary’s into cafes and restaurants, slums into designer living, warehouses into hi-tech offices and old pubs into err old pubs with modern trimmings.

This is something that has always gone on in London and Britain as a whole.  This is exemplarified by the next place on this tour which at one time was a warehouse for the storage of grains and wheat or a granary as I guess it would once have been called. 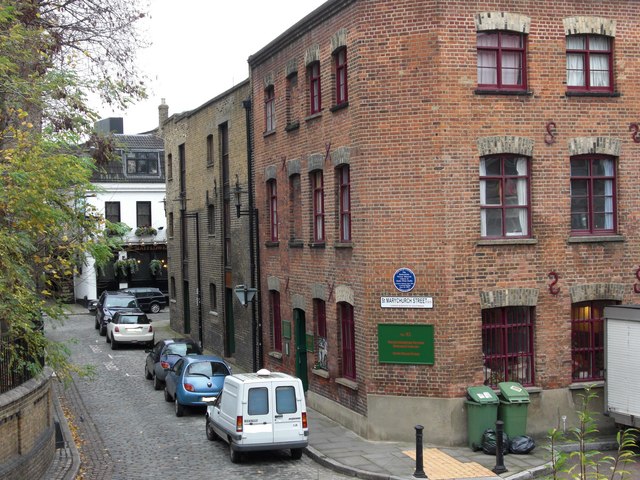 Amongst a huddle of narrow streets in old Rotherhithe village sit one of many anonymous though attractive old buildings. The Sands Films Studios in Rotherhithe are housed in an unprepossessing Grade II listed former granary.

The granary actually sits on the site of a much older Ship and Eight bells pub and if you look at the bollards on the pavement you can see they are likely old cannons from some old sailing ship, these are quite common in areas of Britain with a maritime history such as Portsmouth.

The Studios were founded in the 1970s and offer film production facilities, as you may expect, but also a free cinema club.  They are also home to a wonderful Costumier and they have such a wealth of experience for producing period costumes for the big screen and many of the recent hit television shows that aired on BBC and ITV in the UK before beaming round the world.   These include Poldark, Taboo,  Roots, Versailles, Queen Victoria, Beauty and the Beast, Holmes and Watson, Wolf Hall, Jonathan Strange and Mr Norell, The Hollow Crown, Harry Potter, Mr Turner, Far From the Madding Crowd and countless others.

If this wasn’t enough for one modest granary there is also the wonderful Rotherhithe Picture Research Library. Neatly tucked on the ground floor of the oldest part of the building, its ceiling is supported by 18th century reclaimed ships’ timbers. Inside, imagine a giant scrapbook of thousands of images, photographs and other magazine clippings brought together in a serendipitously haphazard way, covering subjects as varied and far apart as advertising and packaging to costumes, via domestic utensils, nature, transport or war.

Originally the facility started life as an archive so that film makers could research and get an authentic take on what life was like, right down to the most tiny detail.  It is still used for its original purposes but has now metamorphosied into a much grander and dare I say it even more noble cause. 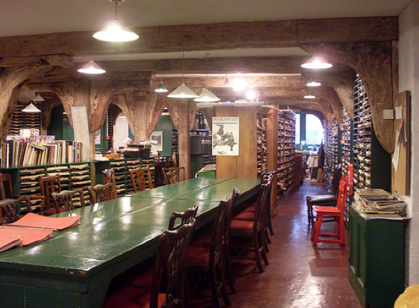 There is a great collection about local history and you begin to get a picture of the visual cornucopia treasured here and used by researchers, stage and fashion designers as well as local school kids. The staff are incredibly friendly, welcoming and passionate and I had a right good chin-wag with 2 very helpful and friendly ladies.

There is also what looks like a cafe just inside the front door but it is actually a staff canteen, however if it is quiet I have a feeling the odd visitor would find a welcome home to park their bum for a while and recuperate.

Inside the Rotherhithe Picture Library.  Note the old wooden beams, of the granary that were taken from wooden ships that were older still.

The Rotherhithe Picture Research Library was established in 1975 as a reference collection, freely available to anyone wishing to do picture research for any reason whatsoever. Whereas most other picture libraries are of a commercial nature, this one is a non-profit-making educational trust.

Many picture libraries are arranged in a way which prevents the researcher from having direct access to the collections.  At the Rotherhithe Picture Research Library researchers are given the freedom to find their own material from volumes on open display, allowing unexpected discovery as well as quick and easy reference.

The usefulness of the Library depends on the accessibility, variety and range of subjects, rather than on the rarity of the material. In addition to its services to designers and picture researchers, the Library offers special provisions for receiving class visits, as well as for the individual child or student wishing to find reference material for project work and/or private study.

This system enables any member of the public, including children, to use the volumes without the need for an expert’s knowledge of indexing or cataloguing.  These volumes are large “scrapbooks” arranged by subject, into which are mounted every kind of visual reference material, from postcards to magazine illustrations, from catalogue and book plates to original photographs, drawings or prints.

If you missed my first post on the area, you can read all about the The Angel Pub in Rotherhithe, which has a long and often murky history and is actually adjacent to the statue of Dr. Salter.  The second post is all about the notorious Jacobs island which incredibly is now a luxory housing and retail area whilst the third and  on the ruins of a manor house belonging to King Edward III which is also about 20 feet from the statues.  Don’t forget the more recent post on The Watch House Cafe with its fascinating, gory past and very yummy present and future.

Finally, don’t forget my most recent post on Dr Alfred Salter and his formidable wife Ada who more than a century ago did so much to improve Rotherhithe and the desperately poor people who lived here.

I know that not everyone is keen on Twitter upping its character threshold from 140 to 280 tweets but I love it; so helpful when writing longer blog titles!

I am a writer and traveller with a penchant for history and getting off the beaten track. With several books to my name including a #1 seller, I also write environmental, travel and history articles for magazines as well as freelance work. Recently I've appeared on BBC Radio and Bloomberg TV and am waiting on the filming of a ghost story on British TV. I run my own private UK tours company (Ye Olde England Tours) with small, private and totally customisable guided tours run by myself!
View all posts by Stephen Liddell →
This entry was posted in Heritage, history, Life, London, Travel, Ye Olde England Tours and tagged Costumier, movies, Rotherhithe, Rotherhithe Picture Library, Sands Studio, television, walking tours. Bookmark the permalink.

6 Responses to The Sands Film Studio of Rotherhithe & The Rotherhithe Picture Research Library.