Lost and found at Lambeth Palace.

As the residence of the Archbishop of Canterbury for centuries, Lambeth Palace, which sits on the south bank of the River Thames in London might be expected to have its fair share of graves of prominent people in history.

However, recent building work at the now deconsecrated church of St Mary-at-Lambeth has unearthed some incredible and totally unexpected findings.    Despite every corner of this old church being carefully examined and renovated over the years, builders have just discovered the remains of several Archbishops of Canterbury from the 17th century beneath a medieval parish church in south-west London.

The renovation team were lifting flagstones and exposing the ground in the church when they uncovered what looked like an entry to a tomb.   To search the void, located next to Lambeth Palace, they used a mobile phone camera as their guide.

Incredibly the builders had discovered an ancient crypt that contains around 30 lead coffins which are believed to include the earthly remains of five Archbishops of Canterbury that date back to the 1660s.

In fact, on top of one coffin, the mitre of an archbishop, glowing in the dark could be seen.

The parish church of St Mary-at-Lambeth was built opposite Westminster in the 11th century by the sister of Edward the Confessor. 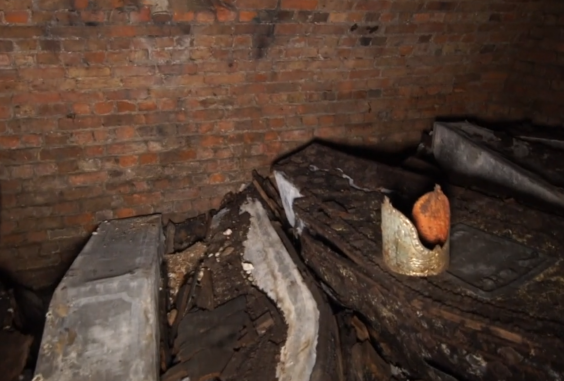 A Mitre of an Archbishop of Canterbury

It was the chosen burial place for various Archbishops of Canterbury from the 1660s.

The coffins contain the remains of Richard Bancroft, who oversaw the production of the revolutionary King James Bible in 1611, as well as clergyman John Moore and his wife, Catherine Moore.

According to the church’s records, another three Archbishops are probably buried in the crypt; Frederick Cornwallis, who was in office from 1768 to 1783, Matthew Hutton – 1757 to 1758 – and Thomas Tenison – 1695 to 1715.  A sixth Archbishop, Thomas Secker, who was in office from 1758 to 1768, had his internal organs buried in a canister in the churchyard.
It’s even more surprising considering is the propensity of flooding from the Thames and the fact the Victorian excavated 30,000 burials from the church when they remodelled the building… as Victorians often did to their churches.
The discovery might not have happened at all as the church was deconsecrated in 1972 and scheduled for demolition.   However thanks to a group of volunteers and garden historians, the church escaped its fate and the volunteers decided to dedicate the building to John Tradescant, the gardener to King Charles I who was buried in the church.

Lambeth Palace and the church of St Mary At Lambeth © Copyright Martin Addison and licensed for reuse under a Creative Commons Licence.

Mary-at-Lambeth closed in October 2015 to undergo a £7.5m redevelopment and become the world’s first gardening museum.
Wesley Kerr, chair of the Heritage Lottery Fund London between 2007 and 2014, said: “To know possibly that the person who commissioned the King James Bible is buried here is the most incredible discovery and greatly adds to the texture of this project.”
Visitors to London and locals alike will soon be able to learn more when the building re-opens shortly as the world’s first gardening museum.

I am a writer and traveller with a penchant for history and getting off the beaten track. With several books to my name including several #1 sellers. I also write environmental, travel and history articles for magazines as well as freelance work. I run my private tours company with one tour stated by the leading travel website as being with the #1 authentic London Experience. Recently I've appeared on BBC Radio and Bloomberg TV and am waiting on the filming of a ghost story on British TV. I run my own private UK tours company (Ye Olde England Tours) with small, private and totally customisable guided tours run by myself!
View all posts by Stephen Liddell →
This entry was posted in history, Life, London, News and tagged Archbishop of Canterbury, Archeology, Bible, Christian, Faith, Lambeth Palace, St Mary At Lambeth. Bookmark the permalink.

3 Responses to Lost and found at Lambeth Palace.