A tragic hero, forgotten in his own time but now remembered in ours.

Whilst out with his metal detector on the muddy foreshore of Thameside, amateur historian and enthusiast Tobias Neto stumbled on a very small but very special piece of history in December 2016.   It was a medal, a VC or Victoria Cross, the highest medal for valour possible in the United Kingdom and old Commonwealth nations.

The metal for the medals was originally sourced from captured Russian cannon at the Seige of Sebastapol and since they first came into active use in 1856, only 1358 have been awarded for ” Only most conspicuous bravery, or some daring or pre-eminent act of valour or self-sacrifice, or extreme devotion to duty in the presence of the enemy”.

Obviously, such medals are treasured by those honoured with them and by their families as well as being hugely expensive when they occasionally come up for auction.   To find one just buried in a riverbank is obviously a most unexpected turn of events.

With the help of the Museum of London, Mr Neto discovered that the medal he found was one of 16 awarded for gallantry to British forces at the Battle of Inkerman on Nov 5, 1854 when 13,000 troops defeated around 68,000 Russians in battle.

The story that has now emerged from his chance discovery is one of both tragedy and heroism, culminating in the shooting of a young work colleague by a decorated veteran of the Crimean war who then turned the gun on himself.

With the whereabouts of only two of the Inkerman VCs unaccounted for, the one found by Mr Neto in all likelihood belonged to a private called John Byrne – a man who appears to have been so tormented by what he had witnessed in battle he suffered a catastrophic breakdown.

Byrne, from County Kilkenny in Ireland, was awarded the VC for returning to the front line to rescue a wounded comrade under heavy fire during the battle.  But following his return from the Crimea, his life appears to have spiralled out of control, as a result of suffering what would now be diagnosed as Post-Traumatic Stress Disorder.

While working as part of an Ordnance Survey team, Byrne became convinced his medal had been taunted by his young work colleague John Watts.

In a fit of rage, the former soldier pulled out a revolver and shot the terrified 18-year-old, wounding him on the arm. Hours later, surrounded by a large crowd and several police officers, Byrne turned his gun on himself and pulled the trigger, taking his own life rather than give himself up.

The inquest into Byrne’s death, following his suicide inside the Crown Inn, in Newport, in July 1879, heard that he had probably imagined the insult.

Watts denied making the insult and told the Coroner he had simply advised Byrne to put out his pipe while on parade, as the men had previously been instructed by their commanding officer.

The Battle of Inkerman in The Crimea War

But Byrne clearly interpreted this as a terrible insult and his landlady, Eliza Morgan, told the inquest how, on returning to her lodging house, he slammed the table in fury, saying: “I served my Queen and country for 21 years and I’ll never be insulted by a curr puppy.”

She said Byrne then stormed out, declaring that Watts “isn’t fit to black my boots”.

A few hours later Byrne – having shot Watts – found himself holed up at the Crown Inn, where he told the landlord, Salter Davy, that he had shot the youth “by accident”.

Mr Davy tried to persuade Byrne to give himself up, but – confronted by a local Sergeant – the soldier, his back to the fireplace, took his gun, put the barrel into his mouth and pulled the trigger.

Byrne’s troubled state of mind may explain how the VC in which he took so much pride came to end up in the Thames mud.

A Lieutenant Barklie gave evidence that Byrne had arrived in Bristol the previous October in a state of destitution and looking for work, having spent time in a lunatic asylum in the Straits Settlements – in what is now Malaysia and Singapore – before returning to Britain.

It appears that, by the time Byrne arrived in the south-west, he may have lost or even sold his prized medal.

A report of the inquest, carried by the Monmouthshire Merlin and South Wales Advertiser of July 18, 1879, states: “When Byrne came to Bristol for his pension Lieut Barklie asked him if he knew why he had not had his cross, and he seemed rather embarrassed so the question was not pressed.”

Given how few VCs have been awarded over the years this was by all measures an incredible discovery.Kate Sumnall, Finds Liaison Officer, Museum of London

Mr Neto, who lives near the Thames at Putney, is convinced that Byrne threw the medal in the Thames “in a fit of regret and despair”.

Byrne was buried beneath a simple gravestone in the Saint Woolos Cemetery, in Newport – his story forgotten until now.

Kate Sumnall, the finds liaison officer at the Museum of London, suggests the lost medal could also have belonged to a Scottish soldier called John McDermond – the other recipient of a VC from Inkerman which has not been accounted for.

During the battle, McDermond saved the life of Colonel Haly, of the 17th Foot Regiment, who was lying wounded on the ground surrounded by the enemy.

With no thought for his own safety, 22-year-old Private McDermond rushed to the rescue and killed the Russian who had wounded the colonel.

A few weeks earlier, he had been wounded in the left hand by grapeshot during the Battle of Alma on Sept 20, 1854.

McDermond spent a total of 15 years in the British Army, serving in Malta, Turkey and Gibraltar, as well as the Crimea, before being invalided out of the army at the age of 33 as a result of injury.

Records held by the Royal Chelsea Hospital show he was registered as a Chelsea pensioner in July 1862.

Some accounts have him buried in an unmarked pauper’s grave in Woodside Cemetery, Paisley – a hero unrecognised in his homeland.

Ms Sumnall said: “Given how few VCs have been awarded over the years, this was by all measures an incredible discovery. We may never establish with certainty to whom it belonged, but the stories that lie behind this medal are truly fascinating.” 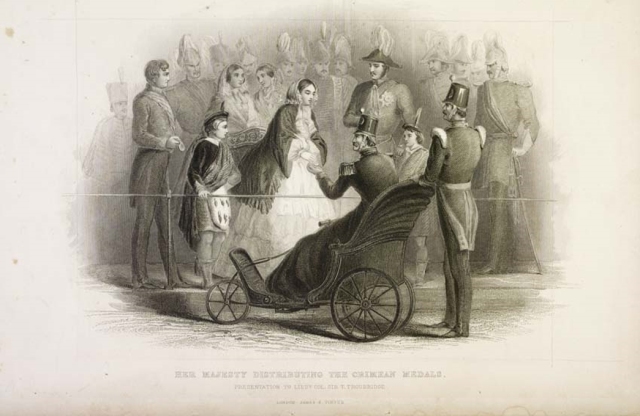 Her Majesty Queen Victoria distributing the Crimean Medals to the distinguished recipients. The engraving from the Museum Of London.

I am a writer and traveller with a penchant for history and getting off the beaten track. With several books to my name including a #1 seller, I also write environmental, travel and history articles for magazines as well as freelance work. Recently I've appeared on BBC Radio and Bloomberg TV and am waiting on the filming of a ghost story on British TV. I run my own private UK tours company (Ye Olde England Tours) with small, private and totally customisable guided tours run by myself!
View all posts by Stephen Liddell →
This entry was posted in Heritage, history, Life, London and tagged Army, Crimean War, history, John Byrne, John McDermond, Queen Victoria, The Crimea War, Treasure, Victoria Cross, war. Bookmark the permalink.

6 Responses to A tragic hero, forgotten in his own time but now remembered in ours.