Funny 1-star reviews are humorous but are seriously not funny!

The last week or two, I have received two 1-star reviews on Amazon, which to say the least is a bit disheartening.  Everyone is entitled to their opinion I don’t deny that…. unless their wrong, ignorant, jealous or vindictive of course.  Often these people cover all four bases!

I have never had anything less than a 5-star review from my tours, and you can probably imagine that both my tours and my books are of a very similar quality.  Perhaps it is that age-old internet anonymity that means people feel they can leave such unjustifiably bad reviews that they would never do in person.

I’m not even sure what constitutes a 1-star review.  I don’t think I have ever purchased anything that has been a 1-star, and I’d never rate a service badly because of the huge number of factors that could be resulting in a one-off bad experience that are well beyond the controls of the service provider.   Let’s move away from book reviews for a moment and see if we can quantify the 5-star system using different products.

5 ***** – Guide was brilliant; the weather was perfect.  The destination was better than we could ever have imagined and made our entire holiday.

4**** – Guide was so professional, the tourist location was really good.  Shame it was a little crowded or too wet to enjoy it properly, but we still had a really great time.

3*** – The guide was ok, maybe he was a bit under the weather.  There was a long line of people to get in, but it was worth the wait.  Next time though we might do things a little differently.

2** – The guide turned up really late, and we had to rush through things to see what we planned.  Then because we were late, we missed our restaurant booking.  The guide found us an alternative, but the food was not to our taste.  Really disappointing.

1* – Our day out was a disaster from start to finish.  The guide was grumpy and not at all a people person.   We had booked for Windsor Castle but for some reason, the guide had got us tickets for Warwick Castle which was twice as far away and not at all what we had looked forward to.  Then the guide drove like a maniac to get us home and swore at us when we didn’t think he deserved a gratuity.

4**** – The delivery was a little slow, and the quality wasn’t what I had last time but still, you can’t get better for this price.

3*** – Pretty average.  Not the best trousers ever but it does the job.

2** – These trousers arrived all creased up and I ordered a size 32 waist, but I received a size 34.  Luckily it shrank in the wash which would normally not be great…

1* – The first pair of trousers I ordered didn’t arrive.  I took a few phone calls, but I got a free replacement pair sent out.  However I clearly ordered black trousers for a job interview, and they sent me brown.  Plus the thread is coming loose on one leg, and I haven’t even put them on yet.

Sometimes I am sure people leave bad reviews when the product is great, but they don’t read the product description properly, or they aren’t aware what they need to fulfill their requirements.  If someone wants to knock a nail in the wall and have no idea about what tool to use, they might order a screwdriver.  The screwdriver might be the best and most expensive screwdriver in the world, but it will never be able to knock in that nail… unless you use the handle of course.  The Screwdriver is perfect but the customer might go and give it a 1-star as it was next to useless at helping them hang up that photo on the wall but it isn’t the nail or screwdriver that is inadequate but the person who ordered the wrong product.

It also brings up questions on the perceived value of books or ebooks.  People are happy to pay £3/$3 for a coffee or tea despite being able to make one at home for a few pennies and that lasts maybe 15 minutes.  Yet a book which offers something unique which they are unable to produce themselves and lasts almost a life-time longer than a hot drink from a street vendor isn’t worth the money for a variety of reasons.

Why is it that people who invest hundreds of pounds on a tour which often is at the mercy of the gods when it comes to bad traffic, or bad weather can be so happy about a product when someone who spends less than a pound or a dollar is on theirs?

I got told that one of my history books suffered from poor research.   That is just factually incorrect.  I studied that subject for four years and have a Masters Degree in it.  Unless the reviewer is a professor at just one or two universities in the entire world, there is probably no-one better qualified to write such a book.  Yet some irate reader can just leave a permanent and revenue-destroying review with so little justification.

Likewise my how-to Airbnb book was labelled as offering the reviewer only obvious information.  Well, maybe the aforementioned reviewer should read the product description better.   Perhaps they shouldn’t be so tight with their money and pay almost 3 times more cash for a bloated “copy-cat” book.  If the book is about Airbnb and tells you how to create a successful profile, even if you say you know all of the contents, the book isn’t 1-star.  You just brought the wrong product.  Unless How To Get Rich Using Airbnb tells you to get rich by leaving our cheesecakes in the back garden every night while practicing an obscure form of Buddhist meditation then it isn’t a 1-star book.  Even if such a book does recommend a cheesecake option, unless you have tried leaving out these cakes and done the meditation and then not got anywhere with Airbnb, then and only then could it be anything like a 1-star product.

The graphic above is the Amazon review stats for Harry Potter BluRay boxset in the U.K.   Now I’m not a Harry Potter fan, until this week I haven’t watched a single Harry Potter but even not being a fan; I know it is not 1-star awful.  It is just not for me, but that isn’t the products fault.  If you like boy wizards and magic spells I’m sure it is the best thing since sliced bread.    Looking at the stats also show that even the best of the best suffer from undeserved and idiotic 1-star reviews.  In fact, given that tens or even hundreds of thousands of people have bought this boxset (maybe even millions) it shows up how few people actually leave reviews.

Some people will say that everyone and everything gets bad reviews, but that shouldn’t be the case unless it is deserving.  Besides those 87 bad reviews count as nothing compared to the millions of Harry Potter fans and the thousands of good reviews.  The problem is that writers like me don’t have thousands of good reviews. Usually, we don’t even have thousands of sales.  I’ve maybe sold 1,000 books all together which is a huge amount but as I don’t press anyone for reviews myself, and I don’t have a big “Stephen Posse” lapping up every word I write then one or two bad reviews can leave an adverse impression on potential readers.

There are lots of people like myself who don’t pay any heed to reviews or advertisers.  We buy or watch or read what we want because we know our own minds, or we have an inkling that we will like something.  Reviews and adverts must work on some people though, and I know from experience that bad reviews temporarily or even permanently damage sales while positive reviews boost them.

I’m not sure what the answer is.  As with having children or being allowed to vote, maybe the only way is to be tested to prove the reader has the basic competencies to be a good parent or make an informed political choice.  Of course, that won’t ever happen, and neither will Amazon limit their open-door review policy as they stick to their policy of the customer always being right, even when they are totally and utterly wrong.  I just don’t see why indie authors or Harry Potter box-sets have to suffer for it.

So I guess I will just have to learn to deal with it like poor old Mr. Shakespeare and many others have. 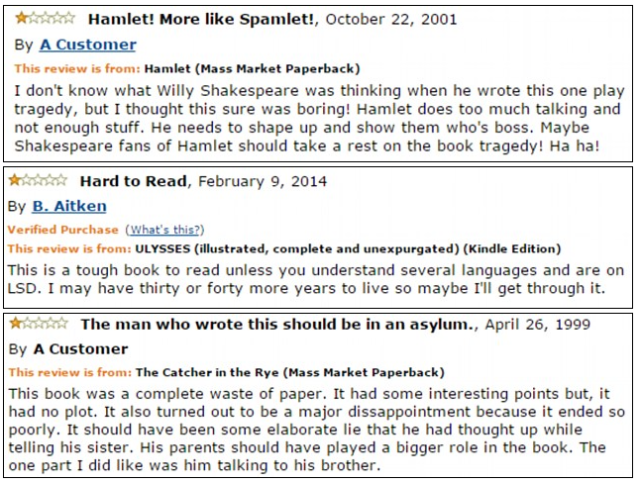 Hamlet, Ulysses and The Catcher In The Rye… all totally useless books.

It’s not just authors who have to put up with this boll-locks.  The Walter Klein family should have stopped reproducing before the third generation.  So he doesn’t like musicals… that makes him 1-star on the culture rating now West Side Story.

Joe Watson makes a strong case for all those who believe the general public aren’t always the best to make judgements about… well anything.

As for the sci-fi classic Alien.  If you like sci-fi or horror, it can be a classic.  If you don’t, well is having a female astronaut really the most unbelievable thing about the film? 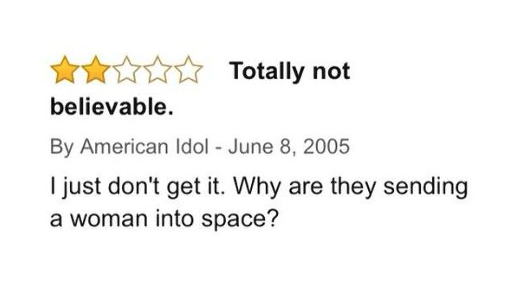 I am a writer and traveller with a penchant for history and getting off the beaten track. With several books to my name including a #1 seller, I also write environmental, travel and history articles for magazines as well as freelance work. Recently I've appeared on BBC Radio and Bloomberg TV and am waiting on the filming of a ghost story on British TV. I run my own private UK tours company (Ye Olde England Tours) with small, private and totally customisable guided tours run by myself!
View all posts by Stephen Liddell →
This entry was posted in Opinion, Popular Culture, writing and tagged 101 Most Horrible Tortures In History, Amazon, Bad reviews, Book Review, Funny 1star reviews, How To Get Rich Using Airbnb, Life, Opinion, Reviews, writing, Ye Olde England Tours. Bookmark the permalink.

11 Responses to Funny 1-star reviews are humorous but are seriously not funny!