Terra Nullius, enclaves & the strange case of Bir Tawil – The land that nobody wants.

When European nations were looking at empire building there were a number of sham reasons used to justify it.  Either religious edicts from Rome, pure Ethnocentrism from France (the belief of one race being superior to all others) or in the case of Great Britain Terra Nullius.  It was the Romans who first came up with the law of Terra Nullius which often translates to being land that is either empty or occupied by only uncivilised tribes.  Such Terra Nullius could be occupied, incorporated into the Roman Empire and civilised.  Britain which largely saw itself as the inheritors of the Roman ideas of law, civilisation and trade used Terra Nullius to claim vast areas of the world from Canada to New Zealand.   It didn’t matter if the areas was inhabited, if the local people had no written laws or obvious political and legal systems to negotiate with then they were deemed not civilised and the land was ripe for development and civilising. Of course others used similar laws or sham ideas but mostly for carving out their own lands and empires and not so much on a global scale.  It may be a surprise that in the 21st century there is still some Terra Nullius today especially with all the quirks of global borders.  There are places where two nations claim the same bit of land and fight over it such as recently in Eritrea or currently in eastern Ukraine.  There are others where nations occupy land they don’t even claim themselves whilst others who live there are denied their own state such as with Israel and the West Bank. Being in possession of land doesn’t necessarily make it yours on a legal level.  Few believe Tibet should belong to China outside China, Crimea to Russia and no-one recognises the vast lands under occupation by Islamic State as belonging to anyone other than Syria, Iraq and to various degrees, Kurdistan. Borders change all the time, even the American border with Mexico was not fully resolved until 1977 due to illicit works that diverted the course of the Rio Grande river.  If Scotland had voted for independence from the rest of the United Kingdom, one of the many disputes would have been the route of the border going into the sea and the rich oil fields there.

Map showing future sea ownership from maximum England ownership to maximum Scotland ownership. In reality the border would likely turn east around where 1999 is written which is where the sea finally is closer to the Scottish east coast than the nearest part of England.

Normally the maritime border follows the route of the land border but in the case with England and Scotland, a few miles before the sea the border sharply changes direction resulting in hugely varying possible areas of national maritime claims. Some disputes seemingly never seem to settle and continue for decades or even centuries whilst other borders are settled amicably but with little sense to the outsider and exclaves and enclaves are created.  These are small areas of land that belong to one country that are entirely surrounded by other countries. Most enclaves are now found in Europe or Asia.

Possibly the most complicated is that of Dahala Khagrabari in India or to be precise it is a tiny bit of land in India which is in Bangladesh which is in India which is in Bangladesh.  Obviously this makes life difficult for the locals whichever side of the border they are in and both countries have said they are looking to resolve the situation with a land-swap although that was several years ago and nothing much has happened since.  If nothing happens then they will end up like those in Europe such as Campione D’Italia, a part of Italy in Switzerland or Llivia, a part of Spain in France.

In 1659 The Treaty of the Pyrenees ceded many local villages from Spain to France. Llivia was not transferred as it was once the capital of Cerdanya and above the lowly village status.

It’s ok when the countries involved settle things peacefully such as the many German/Belgian enclaves or Belgium and the Netherlands but they can also be the cause of much war such as the enclaves of Armenia and Azerbaijan.   There are lots of enclaves in South America and Central Asia too with much fewer in Africa and the Middle-East.  Britain is involved in some enclaves too with quite a lot of land around large airbases in Cyprus. It’s important to remember that real enclaves are parts of other countries and although there are several nations that due to quirks of history are entirely independent but surrounded by another nation such as Lesotho in Southern Africa or Vatican City in Rome, they are not technically enclaves. 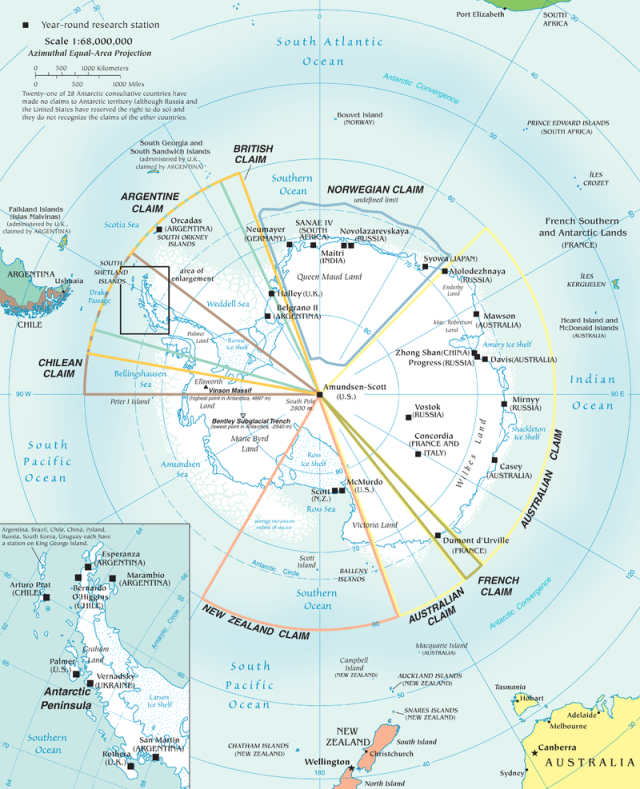 Given all this it is perhaps surprising that there are still some cases of Terra Nullius in the 21st Century though not as much as there was just a few decades ago.  The biggest chunk of unclaimed Earth is at Antarctica, large areas began to be claimed since the beginning of the 20th Century first by Britain and then by Norway, France, Nazi Germany.  Britain split up its claims amongst Australia and New Zealand though still claims a large area which has since also been claimed by Argentina and Chile.  However as the map shows, a significant area is not claimed by anyone at all though the United States and Russia reserve the right to claim territory in the future. There is also some unclaimed land on the banks of the River Danube between Croatia and Serbia but perhaps the most interesting is that of Bir Tawil.  I first came across Bir Tawil as a child looking through my granddads ‘Times Atlas of the World’.  It is a parcel of land between Egypt and Sudan which is unclaimed by either country and at 800 square miles I would be more than happy to claim it myself but it seems unlikely that either neighbouring state would allow that and besides having now been very close to Bir Tawil, I can safely say there probably isn’t much there for me at least. It all comes about from the British administration over 100 years ago when in 1899 a border was set in place separating Egypt and Sudan along the 22nd Parallel.  In 1902 a separate administrative boundary was put into place that was intended to take account of the situation on the ground.  The smaller Bir Tawil triangle under the 22nd parallel was used bas grazing land by farmers from the Ababda tribe near Aswan whilst in the northeast the larger Hala’ib triangle had better access and communication with Khartoum and so given to Sudan.

Hala’ib Triangle claimed by both nations, Bir Tawil claimed by neither. Map by Nordnordwest.

Egypt claims that Hala’Ib triangle from the 1899 treaty which is much greater in area and north of the 22nd parallel which governs the rest of its southern border.  Sudan though also claims the area due to the 1902 treaty.  If either side accepted control of Bir Tawil then it would imply that they accepted the relevant treaty which neither wants to do and so both claim the Hala’Ib triangle and neither claim poor unwanted Bir Tawil. Enclaves can also include the open seas, there are international waters near New Zealand, Japan and Russia that are entirely surrounded by nationally claimed seas.  New artificial islands are being created from underwater sandbanks in China to illegally extend their ownership whilst the relatively local island of Rockall west of Great Britain was not claimed by the British until 1955 due to worries that it could be used as a Soviet spy base and its status was not agreed with the Republic of Ireland until 2014.

Rockall Island – the final territory claimed by the United Kingdom

Perhaps rather than having all these irregularities we should just consider moving enclaves or abolishing them.  If there are really people in Ukraine who want to be Russian, why not just hop across the border to the worlds largest and highly unpopulated country in Russia instead of creating new enclaves for nothing more than geo-political future opportunism.  If a country has something that really is valued more by its neighbours then maybe common sense should prevail.  Pity poor Armenia, not only did their people get massacred in WW1, their lands stolen by taken by Russia and Turkey and their national symbol of Mount Ararat now in foreign Turkey. Maybe there is some hope for the future, last weekend Turkey sent a small invasion force to its enclave in Syria where Suleyman Shah, the founder of the Ottoman Empire is presumed to be buried.  Rather than see his tomb desecrated by Isis, he has now been removed closer to Turkey, albeit it still in Syria. Of course whether the bones are of Salesman Shah are highly disputable and when the shrine most recently came to importance in the late 19th century, it was no doubt partly due to an attempt to create an enclave there should the Ottoman Empire collapse as it later did.

I am a writer and traveller with a penchant for history and getting off the beaten track. With several books to my name including a #1 seller, I also write environmental, travel and history articles for magazines as well as freelance work. Recently I've appeared on BBC Radio and Bloomberg TV and am waiting on the filming of a ghost story on British TV. I run my own private UK tours company (Ye Olde England Tours) with small, private and totally customisable guided tours run by myself!
View all posts by Stephen Liddell →
This entry was posted in geography, history and tagged Antarctica, Bir Tawil, British Empire, Enclave, geography, history, India, Life, Maps, Politics, Rio Grande, Roman Empire, Terra Nullius. Bookmark the permalink.

6 Responses to Terra Nullius, enclaves & the strange case of Bir Tawil – The land that nobody wants.