Red sauce, brown sauce or no sauce at all? 15 minutes of fame on the Danny Baker Show

I thought a while on what to title this post.  I settled on 15 minutes of fame for reasons that will become clear but it might as easily be ascribed the title “How I ended up sitting on the throne of the King of Jordan”.

Every Saturday morning when I am either out walking or more likely preparing my Saturday blog, I listen to the Danny Baker show on BBC Radio 5Live.  I have done for as many years as I can remember.  The show is nominally about football but everyone who listens knows that it is just an excuse to listen to a rare genius on the radio who can happily talk away about anything.  The show revolves around its listeners who phone in and discuss with Danny some of the most unlikely and outlandish events one could ever hope to hear.  They are always funny and Danny along with his wonderful colleague, Lynsey Hipgrave, never try to impose themselves on the show, all callers are made to feel like a star for the few minutes they are on air and the whole thing is very much like having one of those great conversations with friends except of course in this case, with 2 friends that we have never met.

Often the highlight of the show is the legendary sausage sandwich game in which questions are asked on a sporting or other celebrity in the studio.  The questions are always unusual such as “how many shopping bags does X carry from their car in one go”, “How many light switches are in their hallway” or “when was the last time they got a parking/speeding ticket” and terminates with a question on whether that person likes to have their sausage sandwiches with red sauce, brown sauce or no sauce at all.

Each show also has a number of suggested topics for people to phone up such as good reasons to be under a bed or Family Heirlooms that you’ve ruined.  They often produce comedy gems such as the person who got blocked in a cupboard by their vibrating washing machine that jammed against the door.  One subject that caught my attention was “What you’ve sat on”.

I’d wanted to call Danny on this before as it forms one of my classic “It could only happen to Stephen” stories some of which include the scorpion in the desert story, the live WW1 hand grenade and mine-field story and how I came to find myself in the back of a limo with supermodel Claudia Schiffer.

The reason I haven’t called before is that to be honest, I don’t like using a phone, I prefer emails if possible (see my Introverts post here).  I don’t ever call anyone, let alone go on the national radio to speak to a quick-witted Danny Baker and his millions of listeners.  For some reason though on Saturday that is just what I did.

My story is more fully told in Planes Trains and Sinking Boats but briefly I had just travelled across the Sinai in Egypt then the Red Sea before a very unusual night in Wadi Rum, Jordan  when I arrived at my hotel in Amman, the capital of Jordan.  It was early evening and I wanted to get out to have a look around before it got dark. 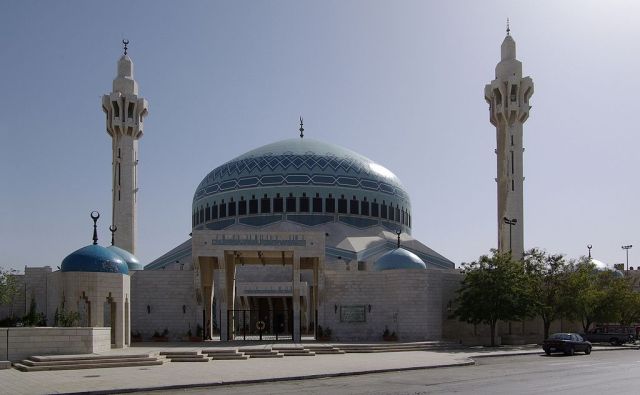 Front entrance to the King Abdullah I Mosque in Amman, Jordan. Photo by Berthold Werner

Almost opposite the hotel was the King Abdullah I mosque, a new mosque and something approaching the size of St. Paul’s cathedral in terms of stature and magnificence.  I went over and asked the guard if I could have a look in using my best broken Arabic.  He explained it was closing down for the moment but after some mutterings he let me in.

The whole mosque was magnificent as I wondered in whilst by another exit, soldiers were literally shooing people out of the door.  Hmm, soldiers in a mosque, that is a bit strange.  Perhaps, especially back in the peaceful year 2000 but unknown to myself, having crossed a number of courtyards and corridors I now found myself in the Jordanian parliament building.  It was very lavish and richly carpeted and decorated albeit in a modern style.  The chamber was in a circular fashion like the American Senate.

Should I be here?  Definitely not.  Would I get in trouble?  Well the soldier seemed friendly enough.  I wondered if he was just letting me get so far into the complex that he would be made to look a hero for catching a spy in a top-secret establishment.

The guard seemed even more nervous than I did and when he asked me to stay here for a moment while he left the room, I did wonder what might happen.  However soon afterwards, he hurried in and beckoned me to follow him which I did.  Apparently he had to switch off the CCTV cameras or else we would be in big trouble.  No kidding!

We went through a few rooms and up a narrow staircase which emerged into a small room with a number of doors leaving off it.  I was ushered into a room and there against the wall were a number of thrones.  I found myself in the King of Jordan’s private reception area and this room in particular was where he would meet foreign dignitaries.

I couldn’t really believe my eyes but as I had come so far I asked the soldier if he would take a photo of me sat in the throne.  I actually sat in all 3 thrones just to make sure I got the right one.

Once the deed was done, the soldier and I excitedly looked at the photo and scurried off down stairs making our way to the exit as quickly as possible.  The guard was very reticent and made me promise that I not tell anyone what had happened, where I had been or what I had seen.  There was no need to fear, I would be as good as my word at least until now, about 15 years later.

We said our excited and nervous good-byes and I disappeared into darkness with the biggest grin on my face.  Calm down Stephen.  I wondered if there was a special look on my face that might give the receptionist a clue “Oh that guy has that ‘I’ve sneaked into parliament and sat on King Abdullah’s throne’ sort of look”.

Myself sat on the royal throne of Jordan or Posh and Becks wedding chairs as Lynsey put it. Strapped to the electric chair as Danny put it.

I was with a friend on that trip and he hadn’t wanted to come out that evening preferring to rest in his room.  You snooze, you loose had never been so true.

And so I kept it quiet for the rest of my trip and no-one came close to finding it out.  At the airport as I prepared to fly out, I was detained by security as a security risk as apparently I had too much photography equipment and might be a spy.

“Not again” I thought as at different points in the trip one of my friends had been apprehended by Egyptian passport control as he was and indeed still is black and the Egyptians seemingly thought that made him African rather than British.  Another was snatched at ‘Aqaba port as he shared a name which was only slightly similar to but not really like that of an Iraqi terrorist.

Being thought a spy was one thing but at the time I vaguely worked in a sensitive industry and to make matters much worse, they only had to flick through my photos to see I had infiltrated their parliament and sat on the Kings throne..’So tell me again how you’re not a spy and yet sneaked through parliament and sat on the Kings throne’ I imagined they might ask?  Fair question to which I would have no answer except for feigning a Basil Fawlty style nervous breakdown.

It was always possible to divert Egyptian officials with disposable biro pens but Jordan wasn’t like that and so I tried to impress upon them that I was just the tourist I was and to look at my photos if you want to and by the way, I really need to get my flight back to London in a few minutes.

Well they checked my camcorder movies briefly and then flicked through a handful of the several hundred photos I had with me and for once good luck saw me on my way and with my photos.

And so 15 years later, last saturday I emailed the BBC and quickly had a reply back saying they would love to use my story but it would be even better if I could go on the show and talk about “What you’ve sat on”.

After a brief period of indecision I said yes and their researcher rang me up and we went through a few things and 20 minutes later I was put on air.  It was a slightly surreal but very exciting moment and there was no need to have worried as Danny and Lynsey started chatting away as if we had known each other for years which in a way we had.

Typical of my luck, just when I got going the phone line went dead.  Stupid mobile phones!  No problem, they called me right back and after a few minutes I was on air and able to regale the nation with my tale.

I do hope that I kept quiet for long enough for the Jordanian soldier, 15 years isn’t too bad considering he just said to wait until I got home.

Have you ever sneaked into something you shouldn’t have?  Let me know!

For more tales of backpacking woe why not mosey on down to Amazon and have a look at my travelogue. 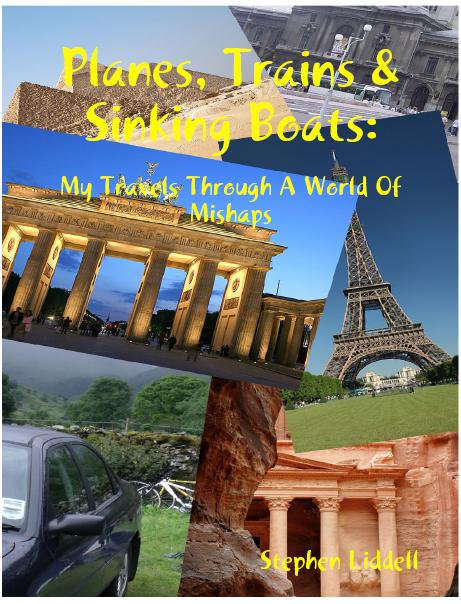 Cover for Amazon Kindle and Ebooks from Apples iStore and Lulu.

I am a writer and traveller with a penchant for history and getting off the beaten track. With several books to my name including a #1 seller, I also write environmental, travel and history articles for magazines as well as freelance work. Recently I've appeared on BBC Radio and Bloomberg TV and am waiting on the filming of a ghost story on British TV. I run my own private UK tours company (Ye Olde England Tours) with small, private and totally customisable guided tours run by myself!
View all posts by Stephen Liddell →
This entry was posted in Life, Popular Culture, Travel, writing and tagged BBC 5Live, CCTV, Comedy, Culture, Danny Baker Show, Fame, Jordan, Life, Lynsey Hipgrave, Radio, Spying, Travel, Travelogue. Bookmark the permalink.

4 Responses to Red sauce, brown sauce or no sauce at all? 15 minutes of fame on the Danny Baker Show