It’s a boy! New successor to the British Crown.

Yesterday will go down in history, not only was it the hottest day since 2006 but at 4.24pm a new successor to the throne was born.

For a couple of weeks the worlds press has been camped around the streets outside St. Mary’s hospital in London awaiting the birth of the first child of Kate and Prince William, or the Duke and Duchess of Cambridge as we are now supposed to call them.

The baby has been stubbornly sticking to its own schedules with even The Queen having stated she was waiting for its birth so that she could go on her annual Scottish holiday. 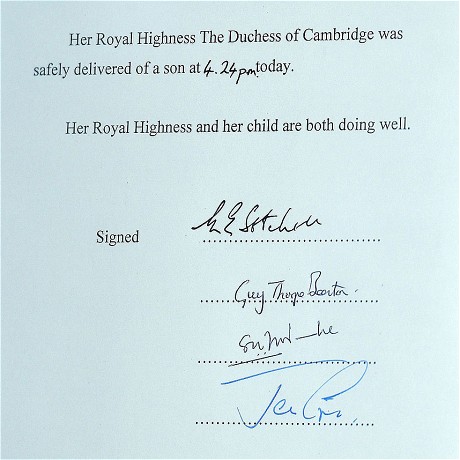 The official announcement from the hospital on the Royal birth.

According to tradition, the official announcement of the birth was signed by the doctors overseeing the birth and posted by the gates of Buckingham Palace.  The birth was also proclaimed by a traditional town crier.

Tony Appleton, a town crier, announces the birth of the royal baby, outside St. Mary’s Hospital exclusive Lindo Wing in London, Monday, July 22, 2013. Palace officials say Prince William’s wife Kate has given birth to a baby boy. The baby was born at 4:24 p.m. and weighs 8 pounds 6 ounces. The infant will become third in line for the British throne after Prince Charles and William. (AP Photo/Lefteris Pitarakis)

As is tradition, all babies that were born yesterday in the U.K. will receive a silver coin which shows how far things have come since Prince Charles was born and new born babies were given increased bacon and butter rations for the day.

This is only the second time in history that 4 generations of monarchs and future monarchs have been present at one time, the only other being with the long lived and Great Queen Victoria meeting most of the pre WW2 monarchs.

Coat of Arms of The House of Windsor

However the future King will actually be the 43rd monarch since the Norman invasion of 1066 which deposed the even older Anglo Saxon monarchs (which I recently found out I am directly descended from!) though as the Normans were really from Scandinavia rather than France there is a lot of mixed blood lines that pre-date the Normans.  The future King is also the 41st direct successor from King Egbert.  A similar modern day parallel can be drawn from Queen Victoria whose descendants now sit on the thrones of much of Europe.

Queen Victoria with Prince Albert and her many, many children.

The birth of any baby is always a joyous occasion whoever they might be.  However Baby Cambridge is probably the only one for whom the church bells will ring throughout both the UK and throughout The Commonwealth.

The Queen, The Duke of Edinburgh, The Prince of Wales, The Duchess of Cornwall, Prince Harry and members of both families have been informed and are delighted with the news

“It is an important moment in the life of our nation.” “It’s been a remarkable few years for our Royal family – a royal wedding that captured people’s hearts, that extraordinary magnificent Jubilee and now this royal birth. All from a family that has given this nation so much incredible service,”

There have been similar statements from the Australian and Canadian leaders amongst many others.

Prince Charles, the Prince of Wales and next in line to the throne was said to be “overjoyed at the arrival of my first grandchild”.

“It is an incredibly special moment for William and Catherine and we are so thrilled for them on the birth of their baby boy,” he added.

“Grandparenthood is a unique moment in anyone’s life, as countless kind people have told me in recent months, so I am enormously proud and happy to be a grandfather for the first time and we are eagerly looking forward to seeing the baby in the near future.”

It is one of the bizarre features of the world that the United States in being one of the few countries (and off the top of my head, the only colony) to have fought a war to gain freedom from the Crown is perhaps the country most obsessed with the birth of the future King with American news channels giving rolling coverage to the birth.    Niagra Falls was lit blue in celebration of the birth of the boy and  President Obama issued the following statement:

“Michelle and I are so pleased to congratulate The Duke and Duchess of Cambridge on the joyous occasion of the birth of their first child, we wish them all the happiness and blessings parenthood brings. The child enters the world at a time of promise and opportunity for our two nations. Given the special relationship between us, the American people are pleased to join with the people of the United Kingdom as they celebrate the birth of the young prince.”

The health of the monarch has traditionally been tied to the well-being of the nation.  A sickly King or Queen meant the possibility of a war of succession or foreign invasion.  The times the country has done well has often mirrored the reigns of ambitious or dedicated monarchs.  Though this has lessened in recent years, a good example of this can be seen in the film The Kings Speech where despite having perhaps the greatest public speaker ever in Sir Winston Churchill, it was still left to the shy King to give his rousing speech to the Empire on radio at the start of WW2.

One of the main advantages of a good monarch is that they bring stability to a country.  Elected officials come and go but the current Queen has been on the throne for over 60 years.  They are seen as politically impartial and a symbol of nationhood and this means that they are generally much more popular than any President or Prime Minister.  It is easy to find out what David Cameron or Barack Obama think about everything but hardly anyone knows anything about the Queens opinion on anything.

One of the historic oddities of this means that the Home Secretary (the second or third top politician in the country) has to be present at the birth of the new monarch.  This harks back to the 17thC when the government found it difficult to believe that a particularly sickly mother could give birth to such a strong child and so ever since the Home Secretary has been present to make sure that the line of descent is legitimate.

It’s sometimes forgotten that the Queen is not just the Head of State of the U.K. but also of many Commonwealth Countries around the world.  The birth of a boy has spared some difficulties as Great Britain has recently changed the laws so that the line of succession now passes to the first born child regardless of whether it is a boy or girl and so far similar laws have not yet been passed in some of the other Commonwealth nations.

However it is set to be a long time before the baby becomes King, most likely around 60 years at least which means many of the people today won’t be alive when this happens.

Nevertheless, that hasn’t stopped crowds of people celebrating with a long queue of people stretching down the road from Buckingham Palace all just to see the official pronouncement of the birth of the future King. 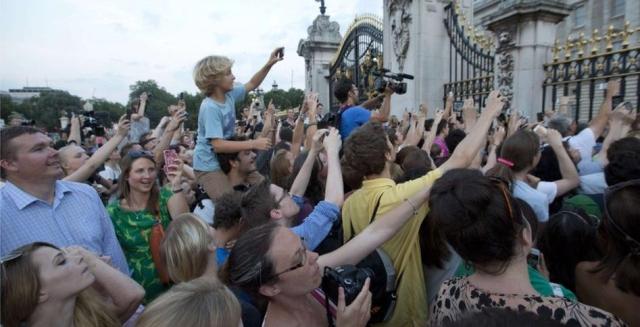 The Crowds line up outside Buckingham Palace to read the official notice of birth.

However, not everyone is overjoyed, a member of the Russian Parliament The Duma has gone on record as saying he sees no reason to celebrate the birth of a child in his country’s sworn enemy and that sometime in the middle of the 21st Century it will drink its peoples blood.  Well, that is something nice we all have to look forward to.  I’ll put it in my calendar along with end of the world and flying pigs.

The baby has not yet been officially named though it is likely to be given several names with its first name likely to be along the lines of George, Henry, James or Philip.  It’s been a long time since we’ve had a King Arthur and King Stephen was 900 years ago though if the current Royal Family does want to hand over the throne to an even older blood-line, I am more than happy to step in to help out.

I am a writer and traveller with a penchant for history and getting off the beaten track. With several books to my name including a #1 seller, I also write environmental, travel and history articles for magazines as well as freelance work. Recently I've appeared on BBC Radio and Bloomberg TV and am waiting on the filming of a ghost story on British TV. I run my own private UK tours company (Ye Olde England Tours) with small, private and totally customisable guided tours run by myself!
View all posts by Stephen Liddell →
This entry was posted in News and tagged Baby birth, Culture, Duke & Duchess of Cambridge, history, Kate Middleton, Life, Prince William, Royal Family, royalty, UK. Bookmark the permalink.

22 Responses to It’s a boy! New successor to the British Crown.