Posted on February 9, 2013 by Stephen Liddell

Though I have lived in the London area for most of my life, I still don’t really consider myself as being at home here.  No offence to anyone but home is always home and the city I consider home is that of Newcastle Upon Tyne in the North-East of England some 320 miles away.

Newcastle as it is called for short has a long history, it’s name coming from the Newcastle which the Normans built although its history goes at least as far back as the Roman settlement of Pons Aelius.  It is at one end of Hadrian Walls hence one of the city districts imaginatively labelled Wallsend.

Amongst other things Newcastle is famed for its heavy industry and coal mining. At one time 90% of the worlds steel shipping was built on its river and its coal helped build the country and am empire, hence the popular phrase “it’s like taking coal to Newcastle” meaning something is a waste of time as there is already plenty of it there such as taking sand to the Sahara!

Engineering was and still is central to the city and region and many world firsts can be claimed by the city and its residents.  The first train line in the world was built nearby and its fine Central Station was the first to be roofed where you can still get trains to London, Scotland as well as Transpennine and Cross Country routes.  One of its industrialists, Lord Armstrong built the first house powered by Hydroelectric electricity in 1868 leading the world in alternative energy by about 150 years!

For a few decades Newcastle was known as a declining and impoverished city and was the setting for the fantastically chilling crime caper Get Carter starring Michael Caine but these days things are on the up.

It’s engineering heritage continues with its IT companies and world renowned medical research university.  The first Star Trek had Scotty as Scots are famous as engineers too but the second Star Trek – The Next Generation had an engineer called Geordie, partly due to our engineers with citizens of Newcastle being known as Geordies.

Newcastle isn’t just about history and industry but is also famous, some would say notorious for its night-life, parties and drinking habits.  More than once the city has been rated as second in the entire world for parties and night life, ahead of London, Las Vegas and and New York and just behind those party animals in Rio, Brazil.

The Metro Centre, the biggest shopping centre in Europe.

Newcastle is also a haven for shoppers with the largest in Europe being at Gatesheads MetroCentre as well as several other developments such as Eldon Square the largest city centre shopping mall and one of its shopping streets, Northumberland Street is the most expensive shopping street in Britain after Londons famous Oxford street.

Traditionally the most important shopping street in Newcastle.

One of the things I like about Newcastle its striking architecture and thriving arts and culture scene.  Grainger town in central Newcastle was built in the early 19th Century and has been voted Britains most beautiful city street. 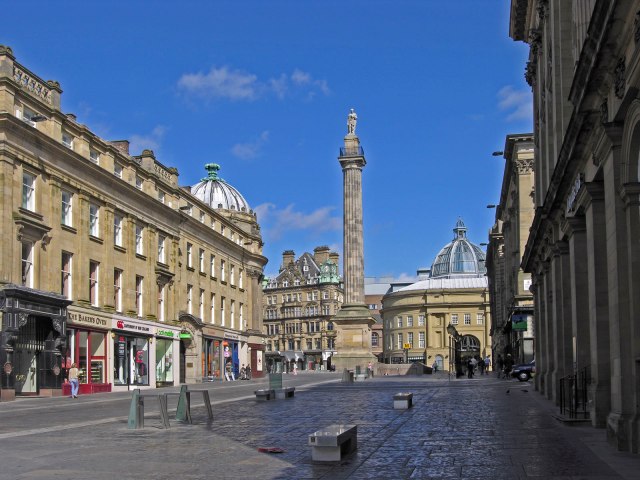 Greys Monument in the heart of Newcastle’s Grainger district 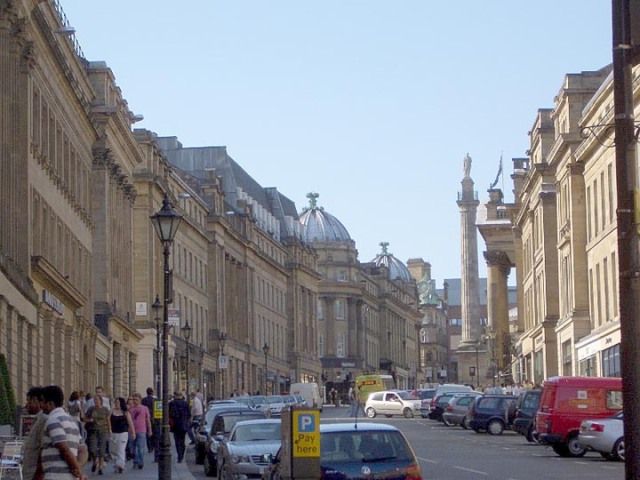 Greys Street – the finest and most beautiful urban street in Britain. 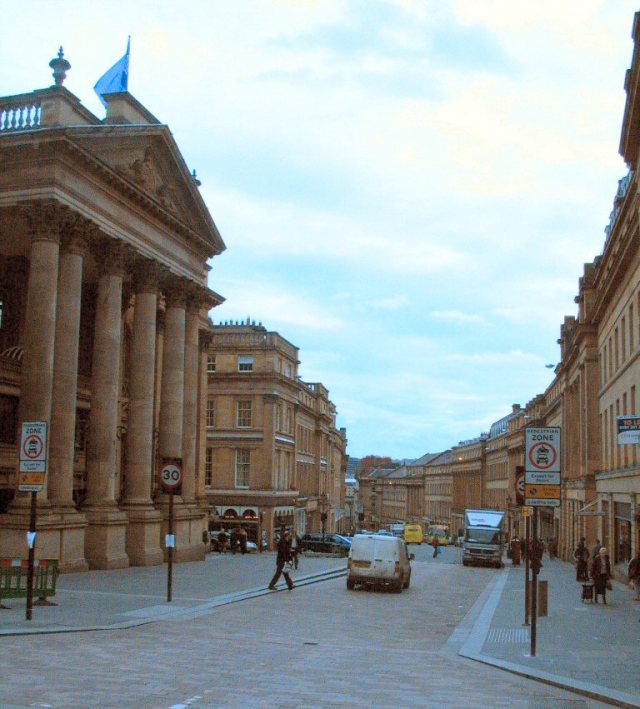 The Theatre Royal is on the left looking down Grey Street towards the Central Station.

It’s hard not to argue with its broad street and gentle slope down to the river, its imposing theatre, tall monument and other things that catch your eye.  Earl Grey for whom the street is named after is perhaps more famous away from the city for Earl Grey Tea.

The Angel of the North, the most popular work of modern art in Britain.

Just outside Newcastle is the Angel of The North, one of the most seen and most popular public works of art ever lying just as it does on a hill over looking the A1M motorway.  On the site of a now disused coal mine it is constructed of tough industrial looking iron to reflect the local industrial heritage. 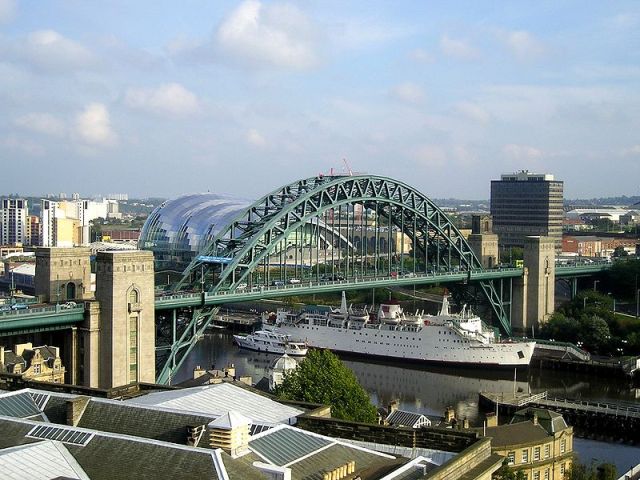 The Tyne Bridge, the icon of the city of Newcastle Upon Tyne. In the background is the futuristic looking  Sage Gateshead Music Centre

The centre of the city is of course it’s river which is spanned by numerous dramatic bridges.  Perhaps the most iconic of which is the Tyne Bridge which was built as a prototype design of the Sydney Harbour bridge.  The view of it when approaching the city from the south by train is dramatic, the chunky strong bridge over the high drop down to the river below and on the hill opposite the imposing stone buildings.  Michael Portillo said on his television programme “Great British Railways” that the view of the bridges and river scape of Newcastle was the most dramatic and his favourite urban view from a train and it’s hard to disagree and coming from a seasoning traveller and Londoner he must know something of what he’s talking about.  Maybe it is because unlike London or Paris where the city is at the same level as the river, the River Tyne at Newcastle sits in something of a canyon. 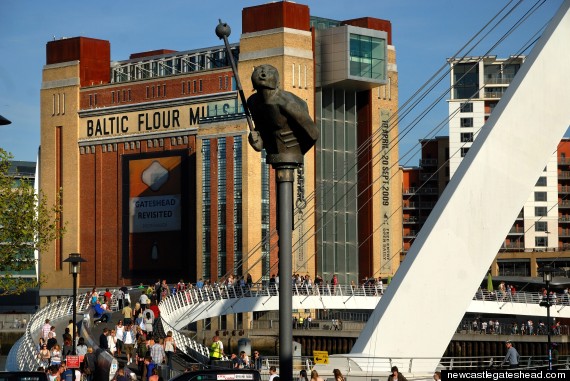 An old mill turned into an award winning gallery. The “winking” millenium bridge is visible in the foreground, it can pivot and raise itself to allow ships to pass underneath.

The river shore used to be home to mile upon mile of docks, shipyards and heavy industrial manufacturing.  Sadly most of these have long since vanished but since the 1980’s these have been replaced by stylish and expensive executive dockside apartments.  The old Baltic flour mill has been transformed into a wonderful art gallery and next door has been built the The Sage music centre which holds internationally renowned concerts.

The Quayside at night circa 2007 image courtesy of David Ord

Like all great cities, Newcastle has an underground transportation system known as The Metro.

The city has 2 Cathedrals in two but many would say it’s true religion is that of football.  Newcastle United is one of just 5 clubs that has always been in the top flight of English football though in truth most of its success came decades ago, even more than a century now.  However the fans are well known for being the most passionate and loyal in the country even though they have little to show for their loyalty.  Some of their most famous players include Jackie Milburn who would work in a coal mine in a saturday morning and then come up to play football for Newcastle United.  He also scored the quickest ever goal at Wembley Stadium.  More recently Alan Shearer was the biggest name at the club alongside his much loved elderly manager Sir Bobby Robson.    We have a great rivalry with the nearby city of Sunderland. 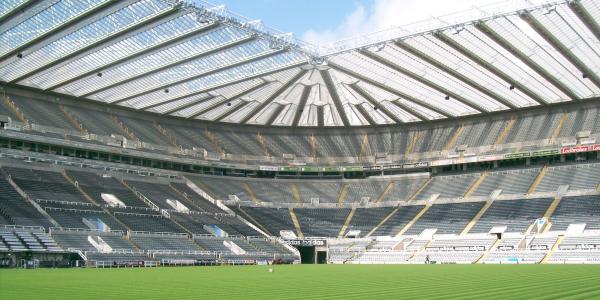 St James Park football ground.  On a good day from the top seats you can see the sea, on a bad day you can see Sunderland.

One last thing is that Newcastle is renowned for being cold, at least by British standards.  Is is just a few miles from the North Sea coast and can get cold winds blowing down from the Artic and lots of snow.  Despite this women from Newcastle will go to parties in a smallest outfits imaginable and men will go to football in the freezing weather with their football tops off singing loudly in the snow.   People from Newcastle take a pride in their tolerance or even love of cold weather especially compared to those in London or Southern England.  I’ll end this post with a humorous post I found on the internet way back in the 1990’s.

The Newcastle Upon Tyne Temperature Scale

Minus 10 – Southerners cease to exist. People in Newcastle throw on a light jacket.
Minus 80 – Polar bears wonder if it is all worth it. Boy Scouts in Newcastle begin wearing long trousers.

Minus 297 – Microbial life starts to disappear. Cows on Newcastle town moor complain of vets with cold hands.
Minus 460 – All atomic motion stops. People in Newcastle begin to stamp their feet and blow on their hands.

Minus 500 – Hell freezes over. Sunderland qualify for Europe.

I am a writer and traveller with a penchant for history and getting off the beaten track. With several books to my name including several #1 sellers. I also write environmental, travel and history articles for magazines as well as freelance work. I run my private tours company with one tour stated by the leading travel website as being with the #1 authentic London Experience. Recently I've appeared on BBC Radio and Bloomberg TV and am waiting on the filming of a ghost story on British TV. I run my own private UK tours company (Ye Olde England Tours) with small, private and totally customisable guided tours run by myself!
View all posts by Stephen Liddell →
This entry was posted in Architecture, history, Northumberland and Durham and tagged Architecture, Culture, engineering, history, Newcastle, nostalgia, Travel. Bookmark the permalink.