Sunday sees the third, final and probably by far the most important in the triumvirate of special days in the UK autumn calendar, Armistice Day. Regular readers of my blog will know that I take an interest in visiting memorials around the country (and indeed the world) and Sunday will see the whole nation do likewise.

Never mind the empire, the recent wars on terror or even D-Day or The Battle Of Britain; you can only truly understand modern Britain if you are familiar with WW1.

Armistice Day or sometimes more commonly referred to as Remembrance Sunday or Poppy Day falls on 11th November each year to remember the war dead in the U.K. 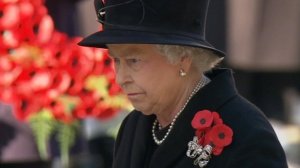 The Queen laying the first wreath of poppies

Originally created to remember the dead of The Great War, there being no World War 2 for there to be a World War 1 at this time, the pivotal moment of remembrance is at 11am when as the saying goes “And at the 11th hour of the 11th day of the 11th month, we shall remember them”.

There are over 54,000 WW1 and later memorials in Britain and this doesn’t include the countless more in churches up and down the land or the many more in earlier centuries. In the Victorian times and earlier, memorials tended to commemorate the glorious exploits of officers and leaders whereas towards the end of the 19thC attitudes changed and efforts focused around commemorating the ordinary soldier. This attitude was very much hardened during WW1 not only due to the millions who died but also in the British and Commonwealth forces of having the feeling of “Lions led by donkeys” meaning the ordinary soldiers were brave but their generals were idiots. This is primarily because many of the older generation of generals were still used to cavalry charges and the like and unfamiliar with the horrors of modern warfare. In many cases British soldiers were shot by their Commanding Officers if they tried to run across no-mans land rather than walk like a gentleman of days gone by even though there were no machine guns or poison gas in the old days.

Cenotaph unveiling – The original was made of wood but replaced within a year with this permanent one and made of the same stone as all the memorials and cemeteries for the war dead.

The focus of the nations attention falls on The Cenotaph which was quickly unveiled after WW1.

On the Sunday nearest to 11 November at 11am each year, a Remembrance Service is held at the Cenotaph to commemorate British and Commonwealth servicemen and women who died in the two World Wars and later conflicts. The monarch, religious leaders, politicians, representatives of state and the armed and auxiliary forces, gather to pay respect to those who gave their lives defending others. Also in attendance are the state representatives or ambassadors of dozens of Commonwealth countries while the streets are lined with members of the public.

One of many rows of Commonwealth delegates line up to lay wreaths.

It is a very sombre day and there has been little in the way of modernising the ceremony or toning things down as has happened in other areas of life. The service has changed little since it was first introduced in 1921, hymns are sung, prayers are said and a two minute silence is observed. Official wreaths are laid on the steps of The Cenotaph. The ceremony ends with a march past of war veterans; a poignant gesture of respect for their fallen comrades as the same selection of music is played every year including Rule Britannia, The Minstrel Boy, Men of Harlech, The Last Post and my favourite amongst them, Nimrod by Edward Elgar. 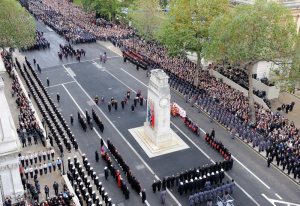 The silence starts the moment Big Ben chimes 11 O’ Clock and finishes with a cannon fire in the nearby parks. Although the service is covered on BBC1, many television channels and radio broadcasts play a dead signal or even switch off altogether for the 2 minutes. Factories and offices and shops and even public transport stop and remember.

1.7 million men were killed just around Ypres alone. The names of The Somme, Ypres, Hill 60 and Passchendaele are full of graves like these in the traditional simple British military style.

Although originally Armistice Day was created for WW1 later subsequent wars are also commemorated not least WW2 but also such wars as Korea, Aidan, Northern Ireland, The Falkands, The Gulf Wars and Afghanistan. In fact there has only been one year, 1968, where no British soldiers have been killed since WW2.

British forces remain stationed throughout the world. (Map from Wikipedia)

Whilst all the deaths and wars are important, I still spend most of my time thinking about the Great War. I have visited many war cemeteries and though those around the D-Day beaches in Normandy do rival them, nothing quite comes close to the poignancy of the graves of WW1 around The Somme, and the like. In some areas there are cemeteries every few hundred metres/yards.

Me wondering around bomb craters on the old front line in WW1 near several cemeteries for the Lancashire Boys where years of boys were recruited from schools and factories and often all died just hundreds of feet apart.

Some are small and have just a few graves whilst others are larger and sadder than is imaginable and even worse when you consider that many of the rows of graves have 5 or 6 or even more soldiers under them, all known only unto God.

The inspiration for the use of the poppy as a symbol of remembrance. This Canadian poem was used to encourage enlistment in the USA in the last year of WW1.

Some of the cemeteries have areas for both WW1 and WW2 dead and with their being over 1,000 in France alone I have only visited a few dozen at most but no matter which you go to, they are all special in their own way. Most of the British and Commonwealth cemeteries are set out in a distinct and British way almost like a park or garden with classical architecture in some. There are some exceptions such as Vimy Ridge which is a general Canadian memorial, and Theipval which must be amongst the biggest individual monument with around 64,000 names listing the fallen and missing from just the first Battle of The Somme alone.

The battles were so immense that the explosions could rattle the windows in London over a hundred miles away and visitors today still can see the trenches and once you have spent a while you can end up finding any number of bits of shrapnel, bullets, artillery cases and barbed wire. I have all of the above from just a 15 minute glance over a ploughed field.

Underneath the farmers fields lie the remains of hundreds of thousands of soldiers.

In recent years as the WW1 generation passes into history and their being less and less of the heroes of WW2 still with us, the emphasis has passed to more recent conflicts. The red poppy is the symbol of Armistice day, this being due to the battlefields being entirely devoid of life with the first plan to re-emerge being the red poppy. Paper poppies are sold by the Royal British Legion and people wear these in the days leading up to 11th November. The funds raised go to the care of elderly soldiers of past wars and now more and more to the injured men and women of the current ongoing conflicts. 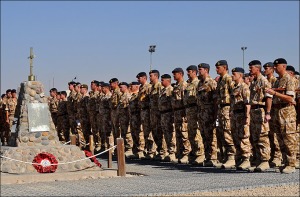 During the memorial services across the world, sometimes poetry is read out from WW1 soldiers. There are numerous works by such names as Wilfred Owen who wrote the poem below; one of my favourites.

If I should die, think only this of me:
That there’s some corner of a foreign field
That is for ever England. There shall be
In that rich earth a richer dust concealed;
A dust whom England bore, shaped, made aware,
Gave, once, her flowers to love, her ways to roam,
A body of England’s, breathing English air,
Washed by the rivers, blest by suns of home.

And think, this heart, all evil shed away,
A pulse in the eternal mind, no less
Gives somewhere back the thoughts by England given;
Her sights and sounds; dreams happy as her day;
And laughter, learnt of friends; and gentleness,
In hearts at peace, under an English heaven.

Sadly like so many Rupert Brooke didn’t survive the war and like millions of others he is commemorated by people who never knew him but owe everything they have to them.

This photo was taken in 2009 of Bill Stone, Henry Allingham, then the country’s oldest man at 112, and 110-year-old Harry Patch. This was the last visit to the Cenotaph by WW1 survivors as they paid respect to their friends on the 90th anniversary of the end of the war. All three have now died so now all we have left is the gratitude, pride and sadness in our hearts.

Like every city, district, town, village and almost hamlet in the country, we have our own memorial just 100 or so metres from our house from when our neighbourhood was just a settlement of a few farms and houses but still there are 27 including 2 sets of brothers. People also leave poppies and wreaths commemorating any family member or friend killed in any war. It is one of the simplest I have ever seen but every time I walk past them I think of them and all the others including the family members who I never knew because of the conflicts.

Lest We Forget – In honoured memory of the Leavesden Parishoners who died for their country in The Great War. This is the memorial today before the new poppies and wreaths are laid and they stay there for the whole year.

Armistice Day is remembered throughout Western Europe and The Commonwealth. It later became known as Veterans Day in the USA. Many countries in Europe such as France, Belgium and Poland have national holidays on November 11th. In Britain this isn’t the case as the main memorial services were moved to the closest Sunday so as to avoid lost production in the war effort during WW2.

And at the setting of the Sun, we will remember them.

I took this photo a few days after Armistice Day. There are wreaths and poppies and crosses commemorating both locals and others who have used the memorial to remember their own friends and relations right up to a serving female soldier who was killed in Afghanistan in 2011.

I am a writer and traveller with a penchant for history and getting off the beaten track. With several books to my name including several #1 sellers. I also write environmental, travel and history articles for magazines as well as freelance work. I run my private tours company with one tour stated by the leading travel website as being with the #1 authentic London Experience. Recently I've appeared on BBC Radio and Bloomberg TV and am waiting on the filming of a ghost story on British TV. I run my own private UK tours company (Ye Olde England Tours) with small, private and totally customisable guided tours run by myself!
View all posts by Stephen Liddell →
This entry was posted in history, WW1 and tagged Armistice, history, Life, Long reads, Poppy, Remembrance, war, WW1. Bookmark the permalink.