Remember, Remember The 5th Of November

Posted on November 3, 2012 by Stephen Liddell

Remember, Remember The Fifth of November

The second in our group of 3 special days at this time of year is Guy Fawkes Night, now more commonly known as Bonfire Night. Not having an Independence Day or an official National Day, Guy Fawkes Night is a day that children look forward to for many weeks in the U.K.  From an early age everyone at schools learns the rhyme, ‘Remember, Remember the fifth of November’.   Just say ‘Remember, Remember’ to any one from Britain anywhere in the world and it is guaranteed they will instantly start reciting the rhyme. 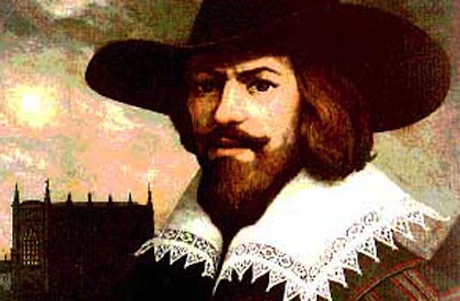 Guy Fawkes was born a protestant in the City of York but went to Europe to assist the Catholic Spanish in wars against the Protestant Dutch during which time he converted to Catholicism.  England at this time had suffered religious turmoil having long been catholic and then inventing Protestantism and switching back and forth depending on the personal faith of the monarch. Often the dominant religious persuasion would inflict death and suffering on the other side which meant that when they were eventually overthrown then all was ripe for another round of martyrs and civil upheavals.

On his return to England, Guy was recruited into a group of plotters who aimed to overthrow Protestant King James and replace him with a Catholic monarch. Although the King had several senior post filled by Catholics, long awaited reforms on increased religious tolerance seemed to have faded away.

Engraving of the Gun Powder plotters

The plan that they drew up was to wait until the State opening of Parliament and then blow it sky-high with the King and most of the senior government ministers and supporters with it.  The time was 5th November 1605, the place was The House of Lords in London.

Wary of blowing up these prominent Catholics, a number of anonymous letters were sent to them warning them to stay away from London.  Most of these went unheeded but such a letter to the 4th Baron Monteagle, William Parker was passed to the King.  As result the cellars beneath Parliament were searched and at about midnight Guy Fawkes was found.  He was led away protesting his innocence and there was no immediate discovery of anything untoward.  However a more thorough investigation found there to be 36 barrels of gunpowder hidden behind some coal.  An amount of explosive that would have totally destroyed the building and everyone in it.

Many of the conspirators fled London but were eventually killed in battle or captured.  Guy Fawkes was questioned and later tortured before confessing.  King James was said to admire his spirit and loyalty but eight men including Guy Fawkes were put on trial and sentenced to be hanged, drawn and quartered;  a particularly gruesome method of execution often reserved for High Treason.  This involved hanging someone by the neck until they were nearly dead and then they were either disembowelled or had their heart removed and often set on fire before being pulled apart into 4 quarters with their remains taken to the 4 corners of the kingdom.  Depending on the crime and the penitence of the criminal or the heckling of the crowd, the executioners could increase or decrease the time spent hanging so as to ensure the prisoner is more or less aware of the nastier elements of his death. However often the executioners were inexperienced so things often got messy. Signed confession letter of Guy Fawkes following his torture. His signature can just be seen at the bottom right under the word “good”.

Many prisoners were forced to watch their kinsmen suffer these punishments before they too endured it.  Guy Fawkes who despite being weak and injured from torture in prison was led with his arms tied up a ladder to his execution but obviously keen to avoid his terrible fate managed to jump from a great height and killing himself by suffering a broken neck although his body still underwent the elements of execution.

Both the plot and the investigation afterwards were very thorough and it could be said that the gunpowder plotters were very unlucky as the State Opening of Parliament had been postponed due to fears of a Plague outbreak.  Additionally the gunpowder had slowly been amassed there since the summer and despite several checks had not been discovered until the letter to the Baron roused suspicion.

From the first anniversary onwards the King encouraged national remembrance and celebrations which were eagerly taken up by the people. 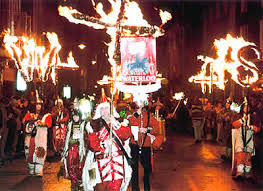 The annual bonfire parade in Lewes commemorating martyrs of nearl 500 years ago.

At one point several decades later a monarch and Parliament tried to downplay Guy Fawkes night, belatedly realising that they had created some sort of monster however the edict was widely boycotted with many houses continuing to display lit candles in their front windows to publicly show both their loyalty to the King and their firm anti Papist beliefs.

By Victorian times the anti-catholic background to the festivities was waning with Queen Victoria and a succession of Prime Ministers finding the whole thing rather distasteful.  Instead Guy Fawkes Night lost its religious and political edge and became a solely communal and commercial festival.

Some communities have very distinct traditions in additional to the more mainstream events.  Fore example in Lewes, Sussex there are 17 burning crosses which are paraded around the streets to commemorate the martyrdom of local protestants during the reign of Catholic Queen Mary I whilst hundreds of miles away in Ottery St Mary, Devon men chase through the streets with lit tar barrels!

A modern day home made guy all ready for the big day! 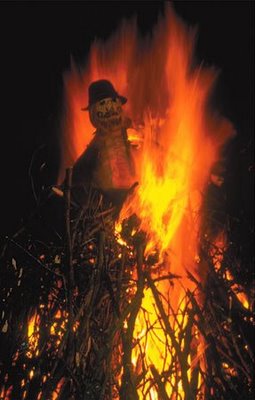 Poor Guy being roasted on the bonfire

A long held tradition which has all but died out these days is ‘Penny for the Guy’.  In the days and weeks leading up to the 5th November children would build a ‘Guy’ out of clothing stuffed with straw and newspapers and trawl him round streets on a small cart asking passers-by for a penny for the guy which would go towards buying sweets, sparklers and small fireworks.  The guy would then be thrown onto the bonfire and be burnt alive.  Sadly children no-longer follow this tradition, either because they aren’t allowed out so much after dark or because if there isn’t a computer screen they aren’t interested but happily Guy is still remembered as Guys are still made for public displays, some 30 feet tall, to be burnt on the bonfire.

Bonfires are held both in peoples gardens or in public parks and sports stadia with anything from 2 or 3 people attending to tens of thousands at a single display with there being thousands of them across the country on and around the 5th November.

Normally by the 5th November the weather outside is freezing but that doesn’t stop everyone having a good time having drinks and snacks.  Bonfires not only keep people warm until the fireworks are ready but are also good for roasting potatoes and nuts in.

Once the bonfire has been burning away for sometime then the fireworks are released with displays last for an hour or two and like he Guys and bonfires, there is much competition for the best display both between neighbours, local districts and between cities. Sometimes the events are entirely free, others are chargeable or have an entrance fee which goes towards charity.

Once Bonfire Night was celebrated all over the world, rumour has it that George Washington banned public displays in America although the tradition continued in some quarters for another hundred years. Other places that still celebrate it include parts of Canada, Australia and New Zealand.

Recent fireworks in the city of Wolverhampton

These days fireworks are even more prominent in Britain with early November also seeing the Hindu festival of Divali, the festival of light ensuring that wherever you go you’re guaranteed to see and hear fires and fireworks across the land.

Guy Fawkes has latterly turned into something of a folk hero which is a remarkable turn of events for someone who could have turned out to be the most infamous terrorist imaginable.  It is sometimes said that Guy Fawkes is the last man to enter Parliament with honest intentions.  Through the recent film ‘V for Vendetta’ he has become a popular figure against oppression world-wide.  If nothing else it seems we will always remember remember the 5th of November and Guy Fawkes, the man who so narrowly missed out on blowing up the King and Parliament. 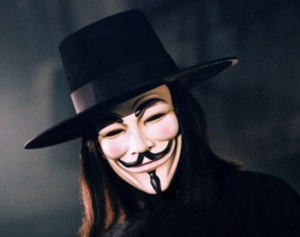 Freedom Forever from V for Vendetta. Guy Fawkes has gone from terrorist to a freedom fighter.

I am a writer and traveller with a penchant for history and getting off the beaten track. With several books to my name including several #1 sellers. I also write environmental, travel and history articles for magazines as well as freelance work. I run my private tours company with one tour stated by the leading travel website as being with the #1 authentic London Experience. Recently I've appeared on BBC Radio and Bloomberg TV and am waiting on the filming of a ghost story on British TV. I run my own private UK tours company (Ye Olde England Tours) with small, private and totally customisable guided tours run by myself!
View all posts by Stephen Liddell →
This entry was posted in Heritage, history and tagged bonfire night, Culture, fireworks, guy fawkes night, history, holidays, Long reads. Bookmark the permalink.

5 Responses to Remember, Remember The 5th Of November