The Mappa Mundi and the chained library at Hereford Cathedral

Posted on October 7, 2012 by Stephen Liddell

Wednesday saw the promise of better weather and so we chose it to go on our furthest trip, down the A49 to the city of Hereford in the neighbouring county of Hereford.  It was a 35 mile drive through valleys and over hilltops but generally as we left Shropshire the land became flatter though none the less attractive for that.  At one point seemingly in the middle of nowhere we came across a Cadburys Chocolate factory and over the road was a cider brewery and we all thought what a charming locality we had found to live in!

Although Hereford is undoubtedly old and has attractive parts, I don’t think it could be counted as truly attractive in comparison to Ludlow or the town of Shrewsbury which we are later to visit.  Much of the city that we saw seemed to be red bricked buildings but maybe my feelings towards the city weren’t helped by the heavy and incessant rain we endured and the rather long traffic jams caused by a car from the 1920’s breaking down at exactly the wrong spot bringing lengthy queues.

Our main reason for visiting Hereford was to visit the Cathedral there.  Over the years we have visited quite a few British cathedrals although by no means even half of them.  Hereford Cathedral reflects the past and wealth of its city and is not the grandest or most supremely ornate Cathedral but as with other Cathedrals has that special “holy” feeling combined to a busyness that comes from it being a very much working building and not just for tourists. 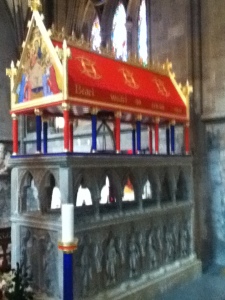 The Bishop of Hereford whilst on a Papal visit to Rome in 1283 and he was Canonised Saint Thomas of Hereford. His remains are interred here.

Hereford Cathedral is still massive by most standards and it took us an hour or more to look over the building and read all the information boards.  The Cathedral houses various tombs of knights, martyrs and Saints as well as the remains of St Ethelbert the King who was both a Saint and Kind of East Anglia, a region in South East England until he was killed in the year 794 on the orders of King Offa of Mercia (another region of England).  Ethelbert had gone to Offa having been promised the hand of hid daughter in marriage but it is said that Offa’s wife pressured her husband to have King Ethelbert executed instead. This killing of one Anglo-Saxon King by another set back the prospect of unifying an England still under partial occupation by the Danes. 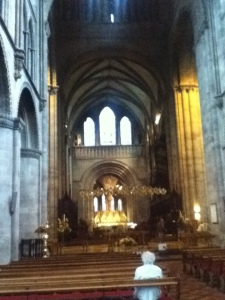 The Cathedral was full of people so I did well to find this quiet spot.

The original cathedral was built in the 8th Century before the Welsh attacked and plundered the place killing many of its staff and the building lay in ruins until the arrival of the Normans who rebuilt the Cathedral which was enlarged upon for centuries.

After giving the Cathedral a thorough going through we paid the fee to go and see the Mappa Mundi.  Regular readers and those who search on Google for World Maps will already have known my interest in maps in my posting Getting Lost In The World of Maps.  The Mappa Mundi is the largest medieval map still in existence and is printed on animal hide.  The map is centred on Jerusalem and has over 420 cities shown.  Being created around 1285 features both accepted geographic and historic features and mixing them with mythical creatures so we have Elephants on display along with people with horses hooves.  Rather endearingly the clergy of Hereford had no pretensions of their own importance with England and Hereford shown at the far end of the map.  Whilst you couldn’t use the map as a travel guide it is surprisingly correct once you learn how to read it and is intended as a spiritual and cultural guide as much as a geographic one. 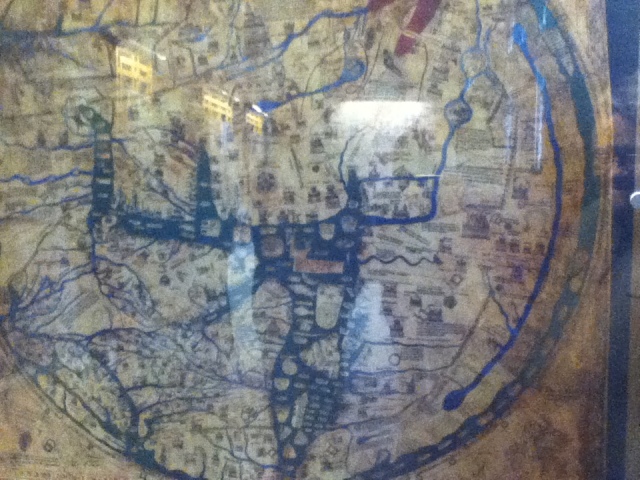 The British Isles are in the 8 O’Clock position, Africa on the right (The River Nile is very visible) with the Med in the middle and Europe from Portugal to Romania on the left. Towards the top is Iraq and then India with China not showing up on my photo.

There is a very good interactive guide to the map and various interpretations of its information and to our delight when we reached the map we had it all to ourselves along with a very friendly and enthusiastic volunteer who was keen to impart all sorts of information.  I was very pleased to see it as I remember growing up in the 1980’s how the Mappa Mundi was in the news as the Cathedral was going to sell it to raise funds (religious buildings receiving no state aid in GB) and it was feared it would be lost to a rich private individual.  However a fund-raising appeal saved it for the nation (and for the world if you’re able to travel).   Along with the Magna Carta which I visited 2 years ago I see the Mappa Mundi as one of the key historic works which we all owe so much too, whether people know it or not.

Adjoining the Map Room is the famous chained library of Hereford Cathedral.  In the Middle-Ages books were so valuable that they were more than worth their weight in gold and would be carried around Europe in large treasure chests.  To keep them from “going walkies” centres of learning, which is what Cathedrals often were, had all their books fastened to bookcases by heavy iron chains.

Even without the chains, it would be hard to carry off some of these ancient books. It’s easy to imagine centuries of scholars studying them.

Unfortunately even today photos aren’t allowed in this small library which holds amongst other things 8th Century Chronicles and the first edition of Dr Samuel Johnsons ‘A Dictionary of the English Language’ which the room attendant kindly pointed out to me when I asked him where it was.

It was still pouring down outside when we left the sanctuary of the Cathedral.  We ran through the streets until we came across a small tea-shop and were all tempted by some freshly baked Cornish pasties.  Finally the weather was turning and we enjoyed a sunny drive back up to Shropshire  where we went to Wilderhope Manor which is a Elizabethan Manor House. It is currently a Youth Hostel though owned by the National Trust.  We have never found a house harder to find.  Miles from anywhere, with no signage and several miles of a single track lane just to get to its entrance gate.  It made us realise how easy it was in days gone by for isolated houses and communities to avoid detection altogether by invaders and raiders.

Now a Youth Hostel, previously home to a brave Major amongst others.

Wilderhope Manor is relatively unique in that it has hardly been modernised for centuries and so though unfurnished does give the impression of being transported back in time 500 years.  The house is said to be haunted by the ghost of Major Thomas Smallman and his horse.  The Major was hunted by Oliver Cromwells Parliamentarians during the Civil War and being a Royalist when he was arrested, he managed to escape on horseback and made it about 10 miles before his pursuers caught up with him.  To make his freedom the Major made his horse jump over the side of a 200 foot drop.  Whilst the horse died, its rider escaped death by breaking his fall in some Apple trees as his pursuers in total astonishment looked on, obviously not wanting to risk their own necks.  Even now the place where this took place is known as The Majors Leap.

For us at 4pm in the sunshine there were no ghosts just the peaceful serenity of the hills and countryside.  Hoping that we didn’t meet any cars coming the other way up the lane, we headed back to our cottage, happy at the end of another a day.

I am a writer and traveller with a penchant for history and getting off the beaten track. With several books to my name including several #1 sellers. I also write environmental, travel and history articles for magazines as well as freelance work. I run my private tours company with one tour stated by the leading travel website as being with the #1 authentic London Experience. Recently I've appeared on BBC Radio and Bloomberg TV and am waiting on the filming of a ghost story on British TV. I run my own private UK tours company (Ye Olde England Tours) with small, private and totally customisable guided tours run by myself!
View all posts by Stephen Liddell →
This entry was posted in geography, Heritage, history and tagged Chained Library, county of herefordshire, Culture, history, holidays, Mappa Mundi, Maps, national trust, Travel, Wilderhope Manor. Bookmark the permalink.