Following on from my post on Monday and indeed April and March, I thought I would finish off this walk with a visit to Grims Dyke.   Grims Dyke is an iron age or possible older earthworks that at one time stretched for 6 or 7 miles.

Some people think it may have been some sort of defensive work others more likely that it was some sort of tribal boundary involving the Catuvellauni and another tribe or indeed between the Catuvellauni and the Romans.  Given the successKing Cassivellaunus had,who can rule them out being some sort of defence against Julius Caesar?   Originally they were thought to date from around 600AD but archeological finds of pottery have been found from 50BC – 50AD leading to the possibility the titch is older still.

The Obelisk is between the H for Hospital and Grooming Marvellous. The old Roman town of Suellani is in the field from the red marker on the right up to the M1 motorway and its possible some field markings can be seen. You can see Caesar’s Pond centre bottom under the accountants of Charterwell Accountants and my March Post Peeking Over London was at the Wood Farm viewpoint. This stretch of Grims Dyke is in the woods to the east of Wood Farm viewpoint and west of the red marker.  The long 1 mile stretch starts to the woods just to the left of the Jewish care home in far left bottom corner.

The best preserved section is 1 mile long towards the centre whilst the bit I am visiting is at the north-east corner.  The earthwork is denoted by a bank, about 15m wide and 2m high, with a ditch to the south, about 4m wide and 1m deep.

I’d always wanted to visit Grims Dyke; it is possible I had seen other sections before but it can be hard to tell when you’re young and the woodlands around here being so full of historical quarries, mounds and what have you.

If I wasn’t that certain about finding the obelisk, I was less certain that I’d find this stretch of Grims Dyke in woods I had never ventured into before and that I was entirely convinced I was allowed in at all.   I decided to sneak in through a broken piece of fence and head in what I hoped was the right direction.  It being early April, the woods were just coming to life and the glades were beginning to show off their beautiful carpets of bluebells.

The beginning of Bluebell season.

After a while I came to a trackway which I thought must surely lead to where I wanted to go or to trouble.  After walking around all morning I wasn’t too fussed either way! As people don’t have guns in the U.K. and there are very strong rights to roam, I was confident the worst that would happen would be a gentle talking too from 6 feet away of course!

All roads lead to Rome? except on the boundary of the Roman Empire.

And there it was right in front of me.  Pigeon brain Stephen had once again got his sense of direction 100% accurate.  I was ever so pleased to find it, how lucky to have an almost prehistoric monument, almost on your doorstep and again seemingly not known about by 99.9% of the population.

I knew that the trees are always kept thinned out so as to try and protect the ancient monument as much as is possible.  Of course having found it, I then had to walk along it.

As you can see some areas of Grims Dyke even on this stretch are more pronounced than others but when it was constructed it would have been a huge undertaking and a very prestigious accomplishment often festooned with adornments of illustrating the power and sophistication of the tribe who built it. 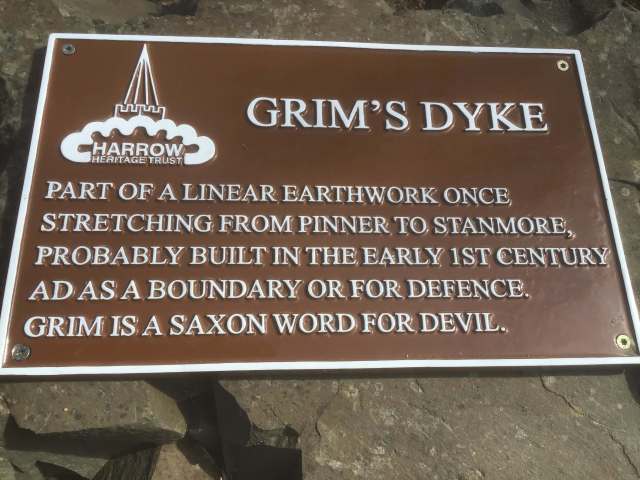 I sign which had just been put in days or weeks earlier.  As alluded to on the plaque, when the Saxons first arrived here and found this ditch in the middle of a then vast forest they both couldn’t comprehend its purpose and found it terribly forboding and they had a habit of labelling such places as ‘Grim’ (yay I just re-discovered this myself) which is very old English for the Norse God of war which they knew as Woden or Odin as Scandinavia knew him.

I don’t generally take selfies but standing in an over 2,000 year old monument ticks all my boxes!  Here I am where my hair was merely out of control and my face wasn’t completely Chewbacca.

I hope everyone enjoyed this particular series of posts on the walk.   I have another series planned in the near future.  I love just finding these amazing places; it’s hard to imagine that 2,000 years ago you’d likely be killed if you strayed the wrong side of this ditch and here I am admiring Bluebells.

I am a writer and traveller with a penchant for history and getting off the beaten track. With several books to my name including a #1 seller, I also write environmental, travel and history articles for magazines as well as freelance work. Recently I've appeared on BBC Radio and Bloomberg TV and am waiting on the filming of a ghost story on British TV. I run my own private UK tours company (Ye Olde England Tours) with small, private and totally customisable guided tours run by myself!
View all posts by Stephen Liddell →
This entry was posted in history, Life, London and tagged Cassivellaunus, Catuvellauni, Coronavirus, Covid19, Diary, Grims Ditch, Grims Dyke, Romans, Stanmore. Bookmark the permalink.