It’s been a rough few days really.  I have been unwell.  I’d like to say that I had the virus but I don’t think I did though I suppose it is possible.  One of the things about having asthma and food related illnesses is that the symptoms of when they make me ill pretty much match the early and indeed mild forms of Coronavirus.

Heady-achy, dry cough and agitated throat, fever, chills, tiredness, aches and pains. For 3 days I really was ill but I had similar 6 weeks ago although this weeks was worse.  It goes to show how amazing it is I do so much in the first place and probably why it is top priority I shouldn’t get it.

I do feel terrible for everyone who is dying or even just worried about it. This is how I spend every winter from about September to March with another possible flare up in July; just waiting for a rogue and thoughtless cough or sneeze from a shopper or commuter to send me off for a month or 3 long illness and an invariable trip to hospital.  People now going to hospital as they are understandably worried about getting out of breath walking across a room or even sitting up straight; well that’s how I spend much of my life.    Hopefully in future winters, people will be more considerate to others about spreading their germs everywhere even if it is just a cold as they no doubt think.

The last 2 weeks have seemed very much like summer holidays tot he 1980’s to me.  Long warm days with not much to do but perfect weather.  It’s a little annoying as I have so much I could do in my new house but of course no business services are available and I haven’t earned a penny since the 6th February so even buying tin of paint is a bit risky.

It’s 25 degrees here again or 80F for my American readers.  My new neighbours are so much more thoughtful than at least one side at my old house and I quite enjoy the goings-on.  On one side is a vet who takes in stray dogs and beyond her some sort of personal trainer who does online fitness videos from his garden.  I’ve met them three times though two of them have been from the NHS 8pm claps with a friendly “You still alive?” sort of nod.

On the other side is a lady who is now a chef having given up a prestigious job in London.  She has two teenagers who both shun day light like it’s the Plague. She has spent the last 2 weeks of fine weather working non-stop in the garden as they themselves only moved a year earlier. It’s looking amazing I must say and I’m a bit jealous!

Beyond her is a television set designer and the rest is as yet a mystery.  One family has a fondness for playing swingball in their back garden.  There is also a house with a little 3 or 4 year girl I think.  Sometimes I hear playful chat and jokes going on but she must have done something bad last Tuesday as her mother went ballistic “What have you done?  I’m busy working my arse off and….”

It’s tough being 4 years old, I remember the whole period from about 3 to 16 was a tightrope act of good behaviour and an seemingly endless run of getting into trouble situations, narrowly avoiding getting into trouble situations, successfully covering up issues and others where you’d do your best to cover things up but knew that one day either tomorrow or in 6 months time it would all get uncovered and then you’d be for a beating.

I’ve only had salad for 3 days but did on Saturday manage the most fantastic leg of lamb to eat with a plateful of roasted vegetables.  I couldn’t eat it all so will have the left overs tomorrow which is actually today when you read this.

I really wanted to go out for just a few minutes on Saturday but was too tired and unwell still even though Saturday was a great step forward on the 3 days preceding it.  I’ve been getting pins and needles in my legs and feet for 3 days too and I’m pretty sure it is from barely leaving the house since New Year.

Sunday saw me feeling much better and so for the first time in 2 weeks and I think only the 6th time of the year, went outside.  Given I couldn’t go anywhere yesterday it was wonderful even to open the front door.  We’re not allowed out in the UK unless for shopping, medical reasons, helping others, work if one can’t work from home and for reasons of daily exercise.  Well I am pretty sure that qualify on at least 3 of those and given it is Easter Day I thought if it is good enough for Jesus to surprise everyone and go outside then it is for me too.

Technically I’m one of the very few who shouldn’t go out but I know from 2 years ago when I mostly stayed in for 2 months that my doctor said I can’t just not go out as it will mess up asthmatic lungs, legs, hearts and all sorts.  I listened to him and did go out that winter and of course got a chest infection 8 days later!

Anyway I ended up going on a 6 mile walk, mostly through woods and farms and only saw 3 walkers and a nurse.  I went to see a 2,000 year old historic monument that I’d always wanted to see as well as a site of a long-lost Roman settlement and a battlefield.  I thought if I’m going to get it then I may as well make it worthwhile, besides who knows when I’ll get out next.  It gives me some good blog material to.

Me in Grims Ditch, a 2000+ year old earthworks.  The Saxons who found it 1500 years ago thought it was the work of the Devil.

Everyone I met kept their distance and I was able to use my knee or elbow to open most of the gates except for one which resulted in a Mexican standoff with an elderly Asian man.  I tried opening it with my elbow, fore-arm and knuckles before having to just use my hand.   He was a bit eager to get through and I’d say came just 5 feet instead of 6 feet away and said “it doesn’t matter” as I took evasive manoeuvres.  He probably thought that anyone so careful about not touching a gate is unlikely to be a carrier though perversely it could mean the exact opposite.   We crossed 5 feet away and I looking the other way with my ipad deflecting his breath in case he happened to breathe in my direction.

The bluebells are just about to come out!

It was great to be outside and to find what I wanted to find.  I feel validated as a historian and tour guide again!  I was so invigorated that I came back home a longer way along a trail I’ve wanted to take for 38 years!    I saw plenty of horses; I love horses and for some reason the sound of them eating and how they tear the grass.  Very different than the noise cows make when they eat.  I do like how I can just wake up in the morning and find 3 ancient sites just off the top of my head without having gone there before.

Not that I have much to do but I hope the coming week sees me well and able to work on my book and write some blog posts as I’ve been to unwell to do anything but while the hours away each day.

Yay, my modest but first ever food delivery from a Supermarket has arrived having been given a priority slot as a vulnerable person.  I feel like a caveman whose just had a wooly mammoth delivered!

I have my first Vulnerable person food delivery coming tomorrow from Iceland.  They don’t do gluten or dairy free food but I have ordered what I need and can have from there.  I’ve also decided that wine must come into the equation too.  I think I only get one slot a month or so and have opted mostly for things like toothpaste, and bulky items like washing up powder and toilet roll paper.  Yes despite not hoarding, I managed to bypass that whole toilet roll fiasco without incident. 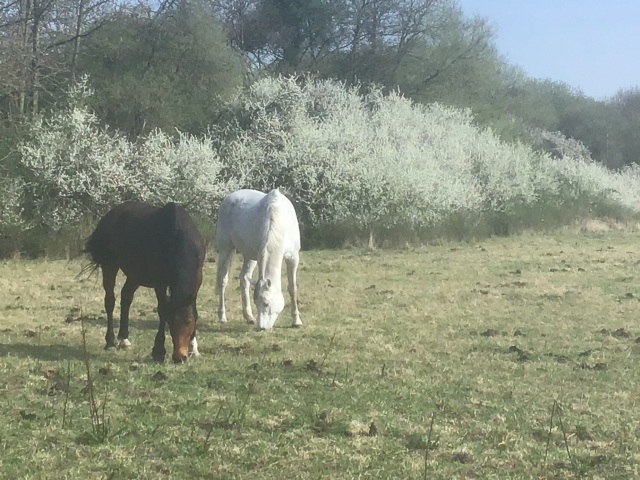 Finally, I saw my friend for 2 minutes on Wednesday; the one who had Coronavirus all the way back on March 14th, at least that is when she realised what it must be.  She is a pharmacist and likely got it off a customer.  Despite being young-ish (or just young if she reads this) and generally being very healthy, she still had to call 999 at one point and only went to work a week or so ago.

I think she just wanted to say hi and check I hadn’t stuck my head in the oven!  If only I could work out the oven that came with the house then I might have that option!!  I managed to resist my natural urge of running up for a hug like a puppy and we stayed the necessary distance apart.  She was still coughing and had a medical mask on most of the time but promised she was long since past being contagious…. I guess if she is wrong then I’m taking a few hundred pharmacist customers with me!   Anyway considering 3.5 weeks ago it seemed she might not be here at all, it was a nice surprise.

Still it is on my paranoid mind a bit but I know from experience when my colds and infections turn into pneumonia that I can have a cough 2 or even 3 months since when I was actually ill.   I’m writing this at 2pm on Sunday, I need to get to 5pm on Monday before I’m officially past the typical 5 day incubation period but so far so good.

One of my guides hasn’t been so lucky and his wife has been in intensive care and I’m a bit stumped as to how to make contact with him next given there isn’t anything I can do either way.  I do feel sorry for him, he is absolutely distraught.  A friend of a friend in London has had 3 deaths in their household so far.

I am a writer and traveller with a penchant for history and getting off the beaten track. With several books to my name including a #1 seller, I also write environmental, travel and history articles for magazines as well as freelance work. Recently I've appeared on BBC Radio and Bloomberg TV and am waiting on the filming of a ghost story on British TV. I run my own private UK tours company (Ye Olde England Tours) with small, private and totally customisable guided tours run by myself!
View all posts by Stephen Liddell →
This entry was posted in Life and tagged Coronavirus, Coronavirus Diary, Covid19, Diary, Easter, outdoors, Self isolation, walks, Woods. Bookmark the permalink.