How is everyone?  We all still here?  That’s good.

As I thought would be the case, some old fashioned values and community spirit have been returning.   I’ve been penned inside my home for a month or two really on top of the official 12 week ban I have on going outside except in dire emergencies. 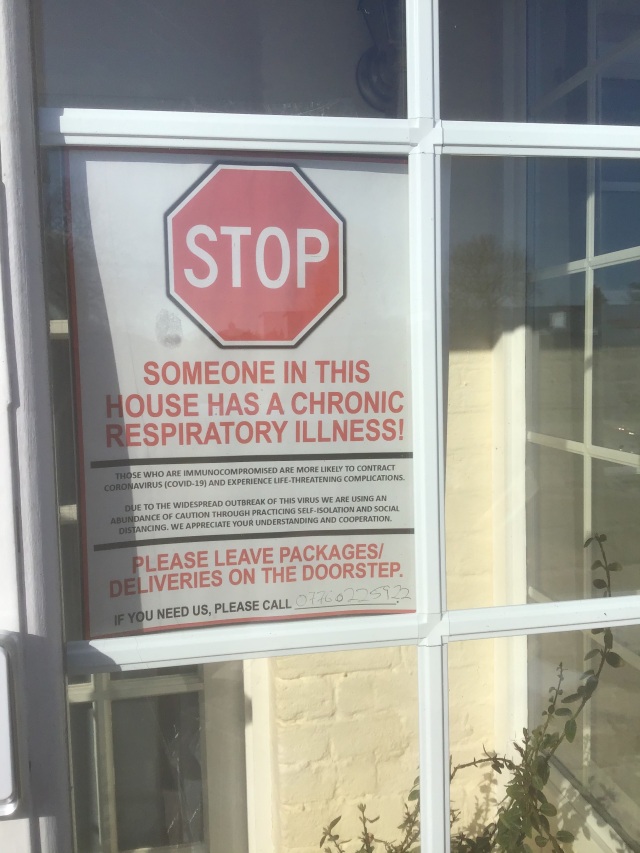 Abandon hope, all ye who enter in.

I now have an emergency sign on the front of my house which warns about how the limited interactions I can make.  I feel rather like I have one of those crosses people would paint on their doors if they had a Plague sufferer inside.  Or perhaps with it being near the Jewish festival of Passover, the Angel of Death.

One delivery man told me through the door that he won’t ask me to sign anything and just leave the box on the ground.  I told him it was probably safer than a snog which made him laugh.

One of my lovely guides, Nigel, volunteered to bring me a food delivery which was nice and the next day a school friend I hadn’t seen for 30 years dropped off a bag of emergency supplies as well.

Not only have I got food issues others have but as I can’t eat dairy and gluten products, I don’t have a good selection at the best of times.  If you have ever watched one of those post-apocalyptic films or shows like The Walking Dead where people get tremendously excited and happy when they find a bar of chocolate or a seemingly normal snack well that is how I find being gluten free is at the best of time.  The joy of being able to eat something though not as good as or cheap as everyone else, especially when it is a favourite food is something few can understand when even your average slice of gluten free bread tastes of cardboard.

I have to say I have been a bit bored or isolated.  I spend some of my time sitting by my bedroom window and pining to go outside.  Watching people with better immune systems than myself happily go about their restricted business.   As I have super hearing, I have the window open and listen in to banal aspects of conversations between people I know not who they are.

Once or twice I have even initiated conversation from my bedroom with pedestrians; just a 2 minutes chat with a real person can be nice.  I expect that I will have deterred them from walking down my street again and they will take their walk elsewhere.

It seems the majority of people are happy with the government response to the crisis so far which is incredible as there are a lot of miserable people out there; I count myself amongst them!

If something good has come out of this virus it is that the Prime Minster has finally put an end to the never-ending DFS Sale…. even though he has the virus himself

The Chancellor of The Exchequer is a British Hindu; he seems very competent and speaks well  He has been no help to me whatsoever but I kind of like him.  I know it is unfashionable these days to be non-partisan or like someone who doesn’t directly advance ones own interests but there you go.   His name is Rishi Sunak and it sometimes brings a smile to my face as new to the job as he is and my not watching television, I only vaguely know what he looks like.  I imagine he has a Vulcans name from Star Trek.  So many Vulcans have a short surname that ends with a K.  Spock, Sarek, Sovak and now Chancellor Sunak.

Sadly I am part of the 5% of the 15% minority who won’t be benefitting from state assistance.  Incredibly I am just over the limit because I haven’t taken a holiday for many years.  If only I had taken a week or two off here and there I would qualify and so I’m being left to wither on the vine.

Even Scottish First Minister Nicola Sturgeon has gone vaguely quiet and constructive.  In fact most politicians around the world have which makes me wonder again why can’t people just be nice all the time?

The only local politician who I think is faring badly it seems is London Mayor Sadiq Khan.  I admit I never have liked him even before he was elected.  He seems always to be very slimy and oily like a used car salesman and seems to only ever be in the news for things that are nothing to do with him whilst dodging anything that comes under his remit…. I suppose a good politician in some ways!  Sadiq Khant, as I always call him, has been in the news for running less tube trains than normal, even before people began self-isolating meaning at the one time those who had to travel would have appreciated a bit of space, they ended up having less than usual and I can vouch for the fact that London commutes are never pleasant at the best of times.

Like everyone else I watch with incredulity and horror as the virus spread across the world.  The USA has come from almost out of nowhere to surge to the top of the Coronavirus cases.  I have a feeling their death rate might end up at or near the top too.

At least things in China seem to be calming down.  First in, first out as the time and tested hiring and firing system goes.  Much of Europe seems to be suffering terribly with Italy going so far as to accept a Russian convoy of equipment which it has been announced as being useless.  Spain too has far surpassed the Chinese death-toll.

Germany seems to be doing the best though it is sometimes ascribed partly to their physicians giving the cause of death to the symptom or underlying illness rather than the virus itself.

In the U.K. it is early days but forecasts the virus will peak sometime around Easter and it seems clear that thankfully we don’t currently seem to be on course to be the worst in Europe.   There were lots of posts on Facebook and other social media 1-3 weeks ago about how we were apparently heading to total disaster.  I never quite understood why.  Even in China or Italy as terrible as it is, the overwhelming majority of people are fine. 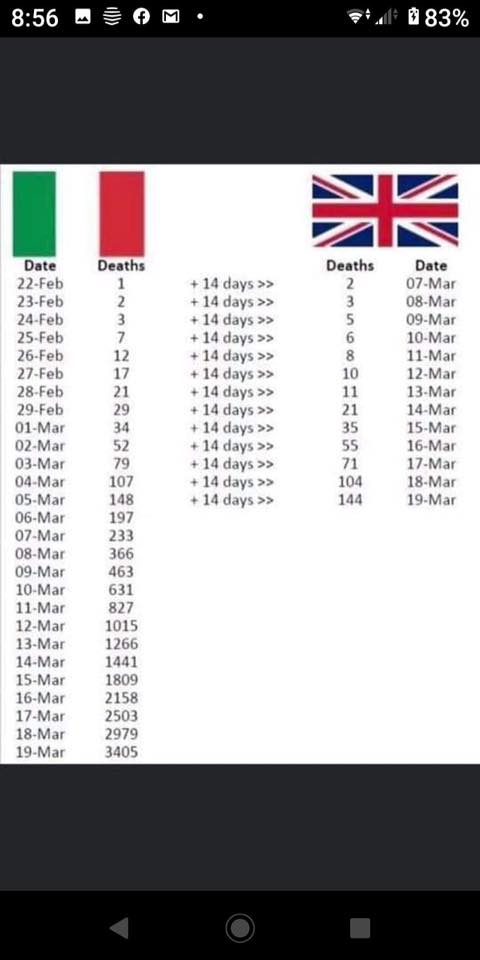 The chart above would seemingly predict that by March 27th the UK would be at around 2,500 deaths.   Whereas the latest figures below show they remain below 600.  I think it also shows how much of the media like to scaremonger and how many people are swept away by ungrounded fear whether this horrible virus, Brexit or anything else. 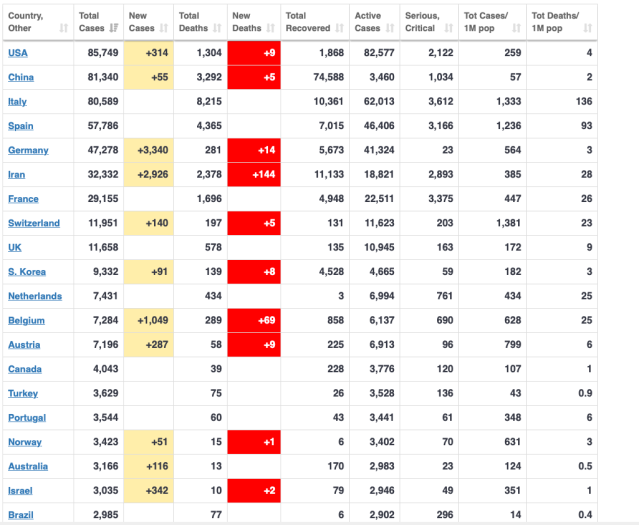 Bizarrely it has been mused that one reason for the lower than predicted figures is that sadly in Britain, people are very isolated.  Old people live on their own with little family or friends and none of the social gatherings or extended families that Mediterranean cultures enjoy.

Every country is different with different health case systems, different social make-ups, different climates and politics and different luck which I think makes comparisons pretty much a waste of time.  The people in each country only get to see the mistakes of their own politicians but the impressive public profiles of foreign governments.

The Countries Best Prepared To Deal With A Pandemic

As I said earlier, I have a feeling that more people in the UK at least and probably elsewhere, will die from none Corona illnesses that are directly attributable to the virus.  Countless thousands will fall victim to intense poverty and the resultant ill-health that follows.  People will become depressed and commit suicide either as a result of self-isolation or lost jobs and then there will be the any who die from heart attacks or cancer simply because of overwhelmed healthcare systems around the world.

Last night the UK came together again to celebrate the hard work and dedication of the NHS during this critical time.  It may be hard to imagine a city as large, diverse and capitalist as London being able to do this but it does from time time, usually for bad occasions such as this.  The Blitz Spirit just about lives.

It’s just announced that Boris Johnson himself has the Coronavirus and is now self-isolating   Hopefully he and as many people as possible who have it, will recover.  Stay well and self-isolated 🙂

I am a writer and traveller with a penchant for history and getting off the beaten track. With several books to my name including several #1 sellers. I also write environmental, travel and history articles for magazines as well as freelance work. I run my private tours company with one tour stated by the leading travel website as being with the #1 authentic London Experience. Recently I've appeared on BBC Radio and Bloomberg TV and am waiting on the filming of a ghost story on British TV. I run my own private UK tours company (Ye Olde England Tours) with small, private and totally customisable guided tours run by myself!
View all posts by Stephen Liddell →
This entry was posted in Life, News, Opinion and tagged Boris Johnson, Coronavirus, Coronavirus Diary, Corvid19, NHS, Pandemic, Self isolation, Self Quarantine, Social Distancing, The Walking Dead. Bookmark the permalink.