Dead Fish raining down on London at Blow-Up Bridge

So far on this series of posts on the canals of London, you’ve probably noticed that these days they are mostly tranquil places.  It wasn’t always the case and none more so than around 5am on the 2nd October 1874.

It was just before 5am on this autumn morning in Regent’s Park when a small convoy of narrowboats, pulled along by a tugboat, glided westwards along the Regent’s Canal, heading for the Grand Union Canal and north to the Midlands. On board the third narrowboat in the convoy – Tilbury – was captain Charles Baxton, a labourer named William Taylor, a third man and a young boy. Also on board was a cargo of sugar, nuts, three barrels of petroleum and around five tons of gunpowder.

The vessels were just turning into the cut behind the Zoological Gardens and passing under North Gate Bridge, when Tilbury suddenly exploded. Despite the bridge overhead taking the brunt of the explosion, the force of the blast was so great that it was heard 25 miles away and windows as far away as St. Johns Wood were blown out.

Debris flew in all directions, the roofs of surrounding houses blew off, windows smashed, trees uprooted and dead fish rained down on the West End. The tugboat’s keel was found embedded in a house 300 yards away. The bridge was destroyed and all aboard Tilbury were killed.

Despite the early morning darkness, Londoners flocked to the scene, still in their bedclothes, to help the police and fire brigade sift through the wreckage and recover bodies from the canal. Horse guards from across Regents Park at the nearby Albany Barracks were brought in to keep order, particularly because of speculation that cages in the zoo had been damaged and wild animals were on the prowl. According to one newspaper: “Several persons died from fright. A number of the animals in the Zoological Gardens were killed. There was great commotion among the animals… their howling added considerably to the excitement.”

Thankfully at least the glass cages housing the zoo’s collection of poisonous vipers were not damaged for the day would have been there once a week feeding day and the idea of more than a hundred hungry snakes loose in London proved panic inducing even as a what-might-have-been.

The canal remained closed for four days, and architects George Atchison and William Burges oversaw its restoration. The bridge was rebuilt in 1876, referred to thereafter as ‘Blow-up Bridge’. The original cast iron columns survived the explosion and were reused, but turned 180 degrees so old tow rope grooves can still be seen on both the canal and towpath sides today. There’s also evidence of blast damage to the beautiful fluted columns. 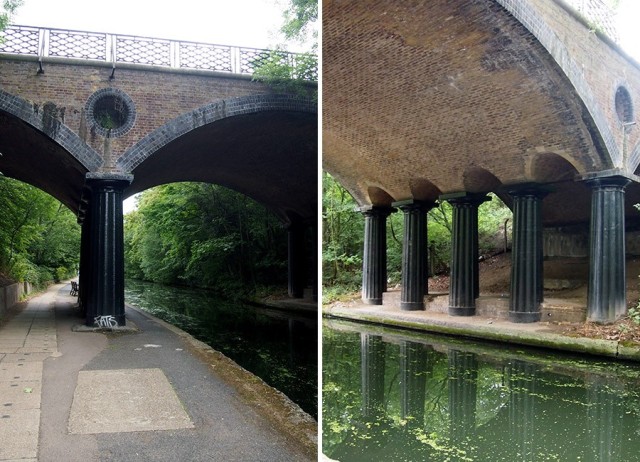 This all says a lot of the great importance that canals played to the economy, trade, transport and industry and it would be equivalent to repairing a broken motorway or freeway flyover bridge today.

But, what caused the blast? There’s been much speculation over the years. Some say a spark came off the bridge and landed in the gunpowder. Most assume that it was one of the Tilbury crew striking a match to light a pipe or to heat up their cabin; igniting the petroleum vapours from the barrels. The canal company that owned Tilbury was condemned for gross negligence in permitting the “highly imprudent and improper” practice of carrying petroleum and gunpowder aboard the same barge.

As bad as the disaster was, it could have been far worse had the barge exploded in the highly populated areas of Camden and Islington, which the convoy had passed through earlier that morning. According to The Times, “This explosion has revealed the fact that London has for years been traversed in some of its most populous and wealthy quarters by fleets of torpedoes.”

As is often the case with disasters and especially so with Victorian ones, the death and destruction wasn’t totally in vain and something positive did come out of this tragic incident. The incident resulted in Parliament passing the Explosives Act in 1875, which regulates the manufacture and carriage of dangerous substances which has made life safer for us ever since.

I am a writer and traveller with a penchant for history and getting off the beaten track. With several books to my name including a #1 seller, I also write environmental, travel and history articles for magazines as well as freelance work. Recently I've appeared on BBC Radio and Bloomberg TV and am waiting on the filming of a ghost story on British TV. I run my own private UK tours company (Ye Olde England Tours) with small, private and totally customisable guided tours run by myself!
View all posts by Stephen Liddell →
This entry was posted in history, Life, London and tagged Canals, history, London, Regents Canal, Regents Park. Bookmark the permalink.