Having created a new London Canals Walking Tour with Ye Olde England Tours I thought it was a good excuse to make good use of some of the many photos I took whilst working out my new tour.

As mentioned in the previous post on canals, they were once the backbone of the economy before falling derelict only to find a new lease of life in the 21st Century.

In my tours as well as going to the regular world-famous attractions, what I really like is taking people off the beaten track and showing them areas they had no idea existed and there are few better ways of doing that than by a canal.  Whether by water or towpath, following the canals of London is almost like travelling in another dimension revealing a hidden side to the city that even most locals don’t know.

A modern bridge over a quay.

The Paddington Arm of the Grand Junction Canal opened on 10 July 1801, linking Paddington to the Bull’s Bridge junction near the future site of Heathrow Airport. The Grand Junction (now part of the Grand Union Canal) was the final link in a chain of canals that reduced the distance from London to Birmingham from 269.5 miles (434 km) in 1789 to 138.5 miles (223 km) in 1805; terminating the canal at Paddington gave easy access to main roads into London and the level route meant no locks were needed on its 13.5-mile (22 km) length. In contrast the nearby  Regent’s Canal needed 12 locks for the 86-foot (26 m) descent from Paddington to the Thames at Limehouse.

In effect the Paddington Basin were a western docks for London and was an instant success, with warehouses and housing springing up around it. Canal traffic increased further when the Regent’s Canal linked Paddington to the Port of London in 1820, but Paddington Basin was “practically killed” as a port as business was lost to wharves such as City Road Basin that were closer to the docks and the City of London. Paddington regained importance as a transport interchange with the arrival of the railway in 1838.

Canal traffic transferred to the railways during the nineteenth century and fell away completely after World War II; the closure of the Regent’s Canal Dock in 1969 marked the coup de grâce. A similar switch from rail to road in the second half of the twentieth century left the Paddington goods yards redundant by the early 1980s. The land became derelict, with no public access to the canal land until 1987.The Paddington Special Policy Area was designated in 1988.

The Paddington Regeneration Partnership, later the Paddington Waterside Partnership, was formed in 1998 to coordinate the regeneration of the area, now designated as the Paddington Special Policy Area. This followed the establishment of the King’s Cross Partnership 3 years earlier to develop a similar mix of railway and canal land around King’s Cross station, a project that became known as King’s Cross Central. The first plans for Paddington envisaged 10,000,000 square feet (930,000 m2) of new space.  When you think that the iconic Gherkin building has floor space of 46,900 square metres then it gives an idea of the incredible amount of construction that has taken place and is still continuing.

So this walk will take us from Paddington on a generally eastern path to the borders of Kings Cross and Islington. 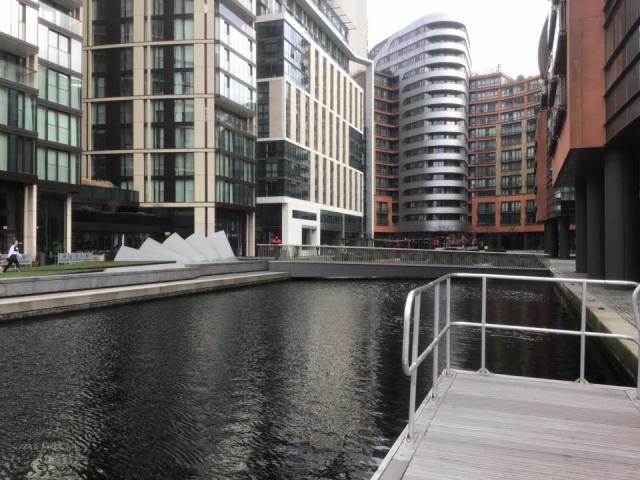 It’s almost impossible to believe that just behind the busy Edgware Road is this quiet oasis complete with a floating pocket park behind the bridge.  This marks the start of the Grand Union Canal which as part of the canal network could see you walk or ride large parts of the country.

In the distance you can just see some of the old dockside cottages.

As canals are so hidden from 99% of the population, they have an almost unknown culture well aside from their actual use by canal boats.  Basically anything you can find in London on land, you can find on a canal boat.

How about a fine restaurant on a boat?

Nearby to the restaurant there is also a floating museum and visitors centre and a short walk away is this very colourful cocktail bar.

Just like roads lead off to various places so do the canals and there are things to see everywhere if only you go and poke your nose round the corner such as this modern amphitheatre for live events or a spot of sunbathing. 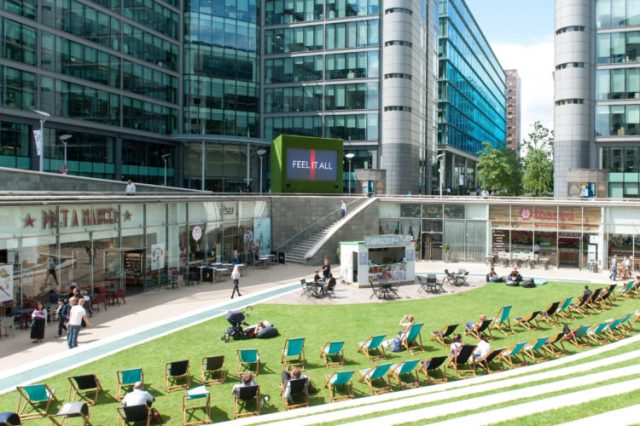 What I really like about walking canals is that it gives you a different perspective on life, you get to see the places no-one else does.

Below there is a public table-tennis table along with some modern art statues.   The big bridge overhead is the A40 flyover, one of the busiest roads into London with countless thousands of cars every hour and yet they don’t see any of this whether at 70mph or crawling in the bad traffic.    The canal is a world within a world.

Modern art and sport by the canal underneath the A40 flyover.

Looking backwards, the Paddington Basin is 500 metres in front and then veers off to the left.

As anyone who has read my blog for a while will know, one of the things that make London unique is the mixture between the very old and very new.  We’ll end this post here with promise of something entirely different next time with the charming Little Venice.

If you’re coming to London and want a tour with a difference do check us out.  With around 500 5-star reviews on various travel websites you will hopefully find something for you.

I am a writer and traveller with a penchant for history and getting off the beaten track. With several books to my name including several #1 sellers. I also write environmental, travel and history articles for magazines as well as freelance work. I run my private tours company with one tour stated by the leading travel website as being with the #1 authentic London Experience. Recently I've appeared on BBC Radio and Bloomberg TV and am waiting on the filming of a ghost story on British TV. I run my own private UK tours company (Ye Olde England Tours) with small, private and totally customisable guided tours run by myself!
View all posts by Stephen Liddell →
This entry was posted in Cool Britannia, Heritage, Life, London, Science and Engineering, Travel, Ye Olde England Tours and tagged Canals, London, Paddington, Paddington Basin, Travel, walking tours. Bookmark the permalink.