There’s something about Nina the Lovebird

On Sunday morning I lost my little feathery friend, Nina the Lovebird.  She had enjoyed a n exceedingly long and good life for a Lovebird reaching around 20 years of age,

Originally Nina belonged to my mother though being an animal-lover we always had an affinity for each other.  In 2016 when the family home was sold and everyone else scattered to the winds, I was asked to look after Nina for a week or two.  In the end that was the last she saw of the rest of her immediate family and so for the last 3.5 years I gained a new member of the household, Nina… my little dragon.

I thought I would share some of the photos the exhibited Nina’s personality.  It may be hard for someone who has never had a bird before to think that they have personalities but they do.

The photo above shows Nina sticking her behind out of her cage.  Despite my keeping her cage clean, Nina quickly realised there was little sense in going to the toilet in her own house when instead she could stick her little bum out and do it in my house.

Later on she developed this rather cute quirk where she would perform a backwards moon-walk on the roof of her cage and do her business off the roof. 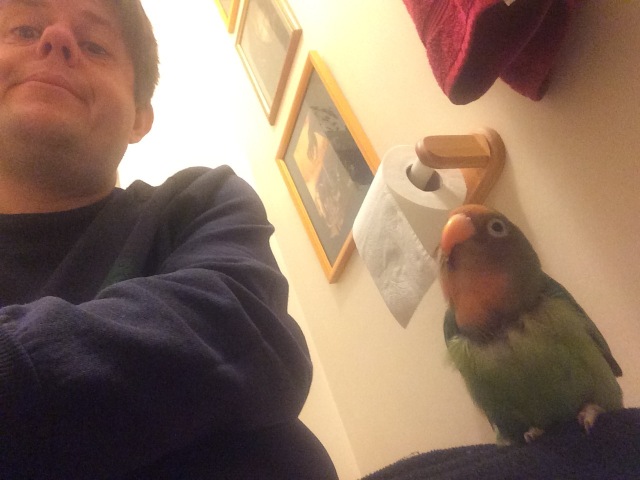 The photo above is perhaps my favourite photo of Nina and gets over something about the true-love nature of our relationship.  Nina never wanted to be apart from me and would like to join in wherever I was.  Your dogs and cat may try and follow you to the toilet but only your little bird is quick enough to fly past the closing door and sit on your knee when you have business to attend to. 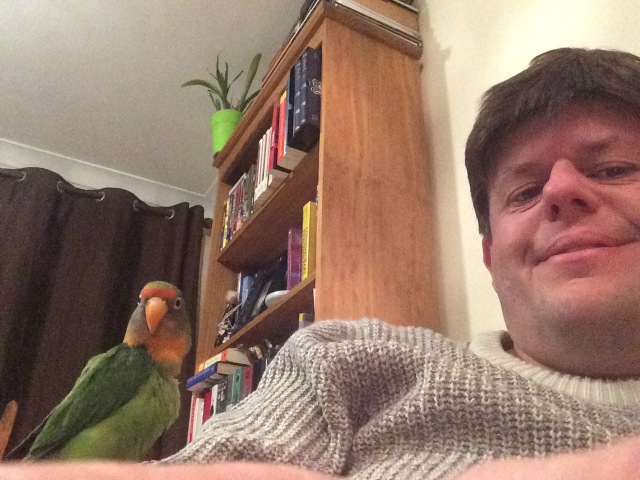 Like most female Lovebirds and especially those that were not trained to be hand-held at an early age, Nina was very territorial and would only let you go near her when she wanted you too.  However she was totally fine in ignoring my personal-space boundaries as we have already seen.  She used to like nothing better than sitting on me and posing for the camera.  She was also a fan of Youtube, especially when Lovebirds were singing away and the sound effects of Star Trek also seem to resonate with her.

If there was one thing that Nina liked then it was food and heaven help you if you were eating and she found out as she would perch on you and walk closer and closer up your body until she virtually blocked out your mouth to intercept food directly from your hand or fork.

In the first few months of looking after Nina, I learned exactly the type of foods that she loved, namely human food.  Being a British bird, Nina naturally had a love of Indian curry, at least the varieties that us British popularised. Here she is helping herself to some of my Chicken Balti.  I always thought her eating Chicken was a little bit canabalistic but though Lovebirds like many others are famed for eating seed and some fruit, meat is also an important part of diet.  Sure they might insects in the wild but I’m pretty sure Chicken Balti seemed to be an acceptable alternative. 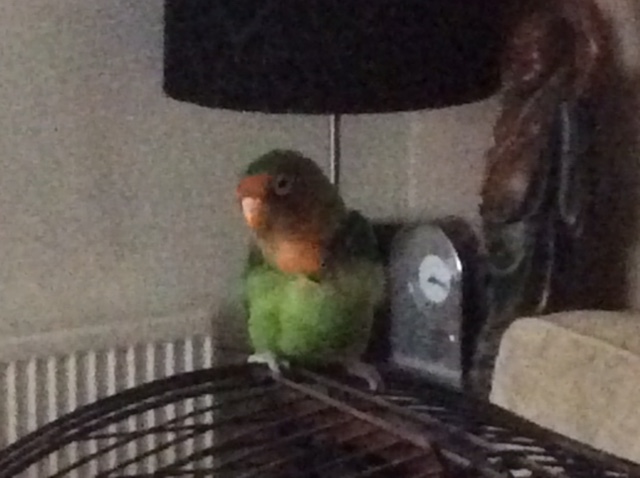 The above is the very first photo I took of Nina on the day I inherited her. 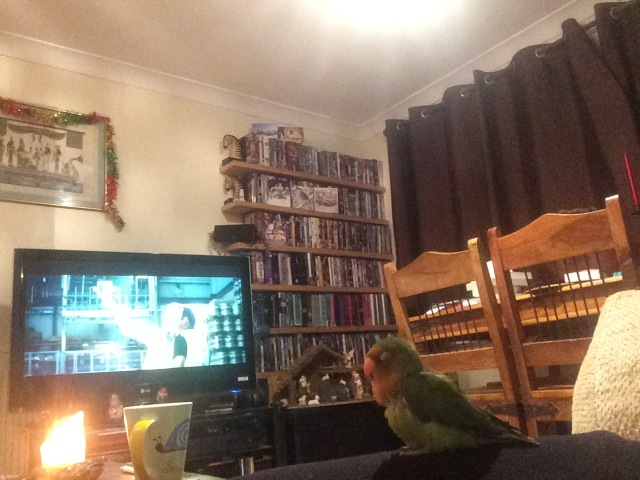 In this photo, Nina has gone to sleep on my lap.  I will always remember fondly her blue feet which were also warm.  She loved to go to sleep on me.  She also liked me singing to her and she would get as close as she could to my mouth and listen for 30-40 minutes, basically until I got tired or just as often, she went to sleep. 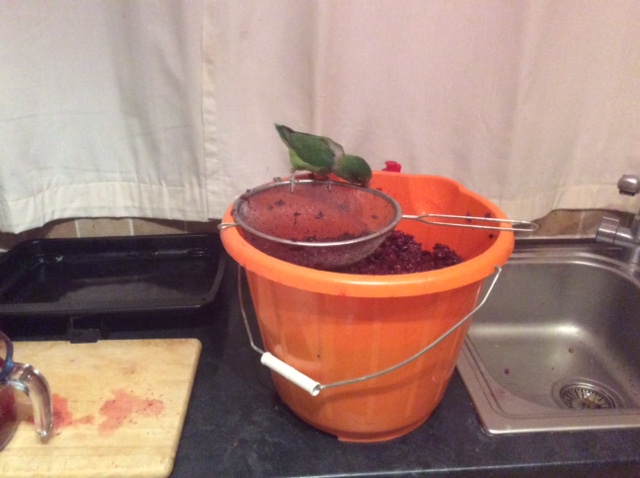 As I mentioned previously, Nina loved getting involved in everything.  Here she is one November trying to help me with my home-made wine making process.  I was always worried she would fall in something or other but she never did.  She seemed to liked the semi-fermented grape skins too.

A few months after Nina arrived, being an elderly bird she sadly had a stroke and lost some of the vision in one eye.  I thought she might not survive but she did and continued to thrive.  However she was no longer able to fly.  Now unable to get at my food even with her cage door open, she would rattle her cage doors like an angry prisoner, so much so I would have to tie them up.

Nevertheless though her days of eating directly off my plate were gone (I was relieved in some ways as who is that keen on bird feet going through their dinner?), I would instead make up a special plate for her as often as I could.

Here she is having some fresh spinach, falafel, potato salad and coleslaw.  In truth though she loved her junk food.  She adored pepperoni pizza, toast and anything in noisy plastic packaging.  She would start getting excited from the moment I would open a pantry door.

She also loved fruit and more than once I would eat in the evenings with the lights off and the television sound on quite loud hoping to eat grapes or oranges in a bit of peace and quiet but within a minute or so she became alerted of the smell.

Nina didn’t just love human food, she was a little greedy.  I would be out all day working, I would feed her her own food before I made my own, only for her to forsake that in lieu of what I was having.  Even if I then gave her some of my food, she would rattle her cage as she believed I was buying her off with titbits or second best produce. 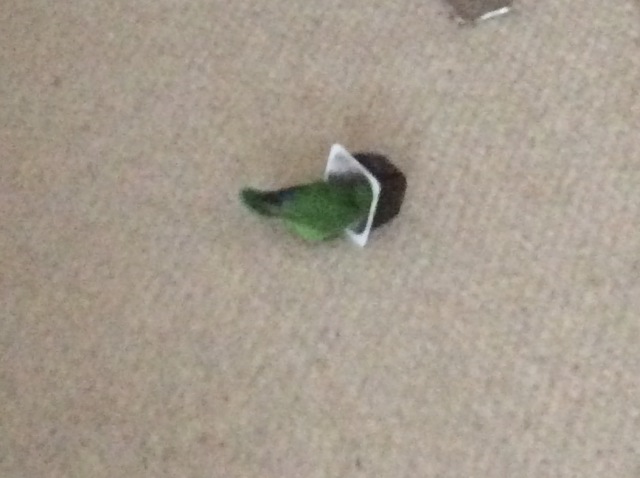 One of her very favourite foods was my soya chocolate mousse.  From the moment she heard me peel the lid of, there was not one second of quiet until I gave her the finished pot.

You can see in the photo above how she has already licked off 99% of the chocolate residue on one side of the pot.

She would then spend maybe an hour licking it completely clean with her tiny red tongue.  Sometimes she would wander around a little like a Dalek and would always get messy foods all over her face and beak as if she were a child learning to eat.

Nina with chocolate mousse on her beak 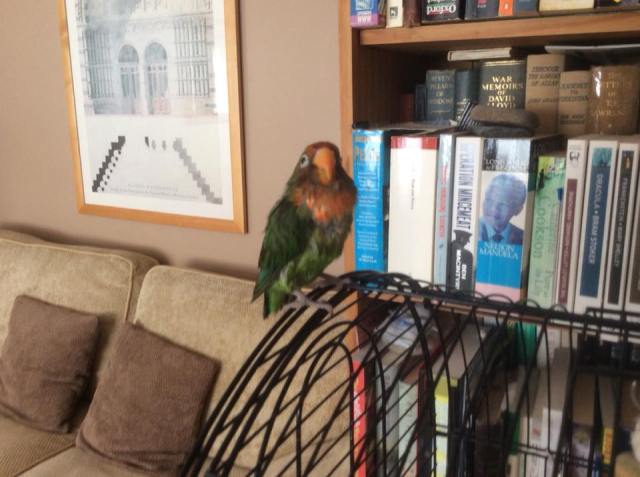 However she would always take great care of her cleanliness and appearance and here she is after after a bath.  She spent a lot of time systematically pruning herself and keeping her feathers in perfect condition.

Once she had stopped flying, she would use her beak like a pick-axe and climb slowly up my body to get closer to me.  It took a bit of time and then it made it hard for me to walk without her falling off.  Here she is when I am trying to cook. 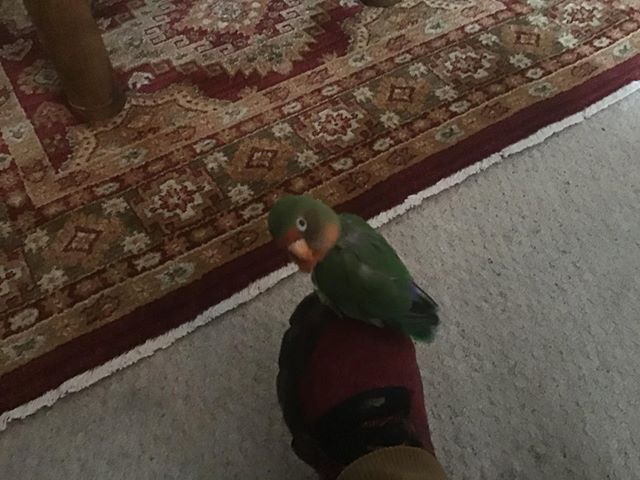 This is the final photo of Nina sitting on me.  It was on Christmas Day and she had the finest Christmas Dinner a Lovebird could want.  A tiny bit of everything that I had.  Turkey, sausage, potato, carrot, parsnip, stuffing, bread-sauce (which she loved), gravy, Christmas Pudding and custard as well as a few other nibbles.

Afterwards like families everywhere, we settled down to watch some television.  Myself on the sofa and Nina on my foot.

I always felt a little bad as I was something of a retirement home from Nina when no-one else wanted her.  I hope she had a good life with me.  In her final week we sang and danced together.  She had some chips from the chip-shop, some sweet potatoes, several grapes and my leftover apple and even some crumbs of gluten free chocolate brownie which if I am honest, only made her want more.

On Friday night she was very keen to get close to me so I sat on the floor with her cage door open and we messed around and chatted.  She wagged her tail to me, something she did a lot and is a Lovebird sign of happiness and flirtation.  Very unusually for her she allowed me to stroke her back.  We were doing this for about 30 minutes which is an eternity for a Lovebird as their quick metabolism means they always have to eat, drink or poop.

Nina looking sprightly and radiant a few days ago.

Normally Nina had a special chirp she made just for me when I bade her goodnight.  I’d then tell her what a beautiful girl she was and how I’d see her in the morning and that I loved her before I blew her a kiss to which she too would make a kiss noise.  On Saturday night however she was fast asleep and on Sunday morning she didn’t make her usual ‘Morning Stephen’ chirp when I opened the curtains at 7.30am though she was asleep.

At 9am, wondering why she had made a fuss about my cutlery rattling around and it being almost her breakfast, I went into the front room and she was there on the floor of the page laying very peacefully but seemingly lifeless.   She didn’t respond at all so I stroked her back for a few minutes.  She was still very warm and it seems to me that she was either dying then or had died just a few minutes earlier.

On Monday I took Nina to the Pet crematorium and in a few days I will have her ashes returned.  I have recycled all of her belongings but kept her favourite toy bird which she would snuggle up to in the day time, occasionally berate when she was angry and sleep with at night.

Nina sleeping on the roof after I got a new 5 bulb floor lamp in November.  Nina loved it and would ‘sunbathe’ in it.

As long time readers may remember, I’m not unused to having slightly supernatural occurrences in my life and this morning.  Soon after 5.30am this morning her toy bird which hasn’t uttered a sound in about 19 years let off a whistle and it has done so a few other times when I have mentioned Nina’s name or been doing activities Nina would normally get excited about.  So it seems Nina lives long and wanted me to know all is well for her even though I do and will miss her tremendously.

Incredibly as only a Lovebird with a Social Media presence and an adopted family across  southern England, the USA and India can know, Nina has been flooded with a number of messages from people she has stayed with, chatted to on the phone or simply seen online.

She was a lovely little thing and I love her so much.  I hope she felt similarly.

I am a writer and traveller with a penchant for history and getting off the beaten track. With several books to my name including several #1 sellers. I also write environmental, travel and history articles for magazines as well as freelance work. I run my private tours company with one tour stated by the leading travel website as being with the #1 authentic London Experience. Recently I've appeared on BBC Radio and Bloomberg TV and am waiting on the filming of a ghost story on British TV. I run my own private UK tours company (Ye Olde England Tours) with small, private and totally customisable guided tours run by myself!
View all posts by Stephen Liddell →
This entry was posted in Life and tagged Death, Grief, Lovebird, Mama, Nina, Pet dying. Bookmark the permalink.

18 Responses to There’s something about Nina the Lovebird