Flora Sandes, the only British woman to fight in WW1

Posted on November 5, 2018 by Stephen Liddell

As we approach Armistice Day in 2018 and the centenary of the end of WW1, I thought I would write a post or to related to the subject as I have done for the last four years.  Whilst I have written a lot on WW1 and indeed on women in WW1 and figures such as Edith Cavell these have mostly concentrated on non-front line roles of women.  Understandably really considering that only comparatively recently have women been allowed to actively fight in the Armed Forces.

However there is one notable exception to this, her name is Flora Sandes and she not only served in WW1 but fought with bravery and distinction and indeed got promoted.  If you have never heard of Flora Sandes then this will be an incredible tale. 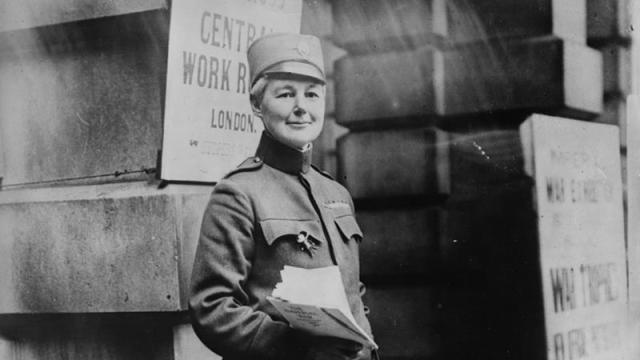 Flora Sandes was born on 22 January 1876 in Nether Poppleton, Yorkshire, the youngest daughter of an Irish family. Her father was Samuel Dickson Sandes (1822–1914), the former rector of Whitchurch, County Cork, and her mother was Sophia Julia (née Besnard).When she was nine years old, the family moved to Marlesford, Suffolk; and later to Thornton Heath, near Croydon, Surrey. As a child she was educated by governesses. She enjoyed riding and shooting and said that she wished she had been born a boy. She learned to drive, and drove an old French racing car

Flora Sandes was 38 when the Great War broke out, and she wanted to serve. She was highly educated, fluent in French and German, and independently wealthy. She loved the outdoors, hiking and camping in all weathers. Usefully she could also ride and shoot.

She volunteered as a nurse but was rejected by the British because she was insufficiently qualified in the medical field. The War Office was dismissive of women who wanted to contribute to the war effort, though of course many found ways to do so.  More often than not however like they were told by the War Office to “go home and sit still” as was the case with Elsie Inglis, the Edinburgh-educated doctor who founded the Scottish Women’s Hospitals.

Like Elsie Inglis, Flora Sandes did neither. She left England almost immediately and went to Serbia where the war had flared up in August 1914 with a women’s volunteer ambulance unit.

More than 600,000 allied servicemen came to the Macedonia front between 1915 and 1918 – French, British, Italian, Greek, and Russian. Their job was to help the Serbs in the war against Austria. But by the time the first troops landed at Salonica they had been overtaken by events. The Serbs were already suffering a catastrophic defeat.

Serbia and Bulgaria had been allies in the Balkan wars of 1911 and 1912, fighting to end centuries of Ottoman rule in south-eastern Europe. But as the Ottoman Empire receded, Serbs and Bulgarians turned on each other.

Serbia had ended the Balkan war of 1913 in possession of the land which corresponds roughly to the modern-day independent state of Macedonia. The Serbs called it South Serbia, refusing to recognise a distinct Macedonian identity. But to the Bulgarians it was Western Bulgaria, and the Macedonian “language” was not a separate tongue at all but simply “Bulgarian written on a Serbian typewriter”.

The outbreak of war between Serbia and Austria in 1914 – the opening of World War One – was to give the Bulgarians the perfect opportunity.

The population of the Austro-Hungarian Empire was twelve times that of Serbia, a kingdom of just four and a half million people. Even so, the Serbs managed to push back Austria’s first attempt at invasion in the summer of 1914 – the first Allied victory over the Central Powers of World War One.

The Austrians invaded again, and occupied Belgrade in December 1914. The Serbs fought back and recaptured the city.

By the end of the year, the Serbs had lost an estimated 170,000 men. That winter, a typhus epidemic swept through the civilian population, killing hundreds of thousands more. The Serbian government declared that its war aim was now not only the liberation of Serbia itself, but the liberation, from Austria, of all the Slavic speaking territories of the empire, including Bosnia, Croatia and Slovenia.

There was further disaster for Serbia in 1915. Bulgaria entered the war in September and invaded in October, just days after Austria and Germany launched new offensives into Serbia.

The Serbian army collapsed and began a long, defeated trek across the mountains of Albania in the brutal cold of a Balkan winter.   When in late 1915 the Serbs were in full retreat, making their trek across the mountains, Flora refused repeated orders to abandon the forces she’d been assigned to and withdraw to safety. Eventually she was the only woman left.

Thousands died of hunger, cold and disease. By February 1916, the last of the survivors had reached the Adriatic coast and were evacuated by allied ships and put ashore, finally, at Salonica to rejoin the allies.

Her biographer, Louise Miller, says she had long wanted to be a soldier. She’d been raised on the stories of Kipling and had read and re-read the Charge of the Light Brigade.
“To be in the thick of battle was something that Flora had long dreamt of… and [she] had spent hours imagining herself as the central character in Kipling’s tales of heroism and adventure. She had high hopes for the climax of the Bulgarian attack.“By now there was little point pretending she could be useful as a nurse in such conditions. Desperate not to be sent back to Salonica, she rested all her hopes on being accepted into the ranks of the Serbian army as a soldier.”She expected rejection. Instead, Milos Vasic, the Serb commander whose men she had served, welcomed her. “If you remain with the army,” he told her, “you will have to go with them through Albania. The trip will be terrible, like nothing you have ever experienced.”Flora asked: “Will I be a burden?”

“Quite the reverse,” Vasic said. “It will be better for us as your presence will encourage the soldiers. You represent the whole of England to them”.That night, Flora Sandes became a private in the Serbian Army and as was the case for any man in WW1, it was to be a precarious existence.
In November 1916. Sandes was among tens of thousands of Serbian troops fighting, from their base in northern Greece, to try to re-enter their own country, which had been occupied by Bulgarian forces a year earlier Sgt Sandes, an infantry soldier in the Serbian Army, lay semi-conscious on the snowy hillside after taking the full blast of a Bulgarian grenade, and would later recall being wrapped up and bundled away like a rabbit in a poacher’s sack.“I could see nothing,” the Sandes wrote. “It was exactly as though I had gone suddenly blind; but I felt the tail of an overcoat sweep across my face. Instinctively I clutched it with my left hand, and must have held on for two or three yards before I fainted.

“The Serbs have a theory that you must not give water to a wounded man because they say it chills him, so they poured fully half a bottle of brandy down my throat and put a cigarette in my mouth.

“I caught the little sergeant who had helped carry me watching me with his eyes full of tears. I assured him that it took a lot to kill me, and that I should be back again in about ten days”.

It took Sandes not ten days but six months to recover sufficiently to rejoin the ranks and to return to the front line. By the end of the war, Sandes would be awarded Serbia’s highest military honour, the Order of the Karadjordje Star.

No nation lost more than Serbia. Sixty per cent of its army of 450,000 died by the end of 1918 – 25% of its entire population were killed in combat or died from disease, including more than half of its entire male population.Few visit the old war graves in SE Europe but  the cemeteries are there, maintained in perpetuity by the Commonwealth War Graves Commission. It has been said that they stand between the men of that unremembered conflict and the cold indifference of posterity.
At the end of the war she was commissioned as an officer, making her simultaneously the Serbian army’s first female and first foreign officer and now promoted to Captain, but she found life “dull and irksome” and pined for a war she had clearly relished.  She was finally demobilised in October 1922. Flora lived for a time in Paris, then South Africa. She married a Russian emigre a dozen years her junior, returned to Belgrade and tried to re-enlist, at the age of 65, when Belgrade was bombed by the Germans in 1941.
However the German invasion was over before they could take up any military duties. They were briefly interned by the Germans, before being released on parole. Yudenitch fell ill, was removed to hospital, and died there in September 1941. 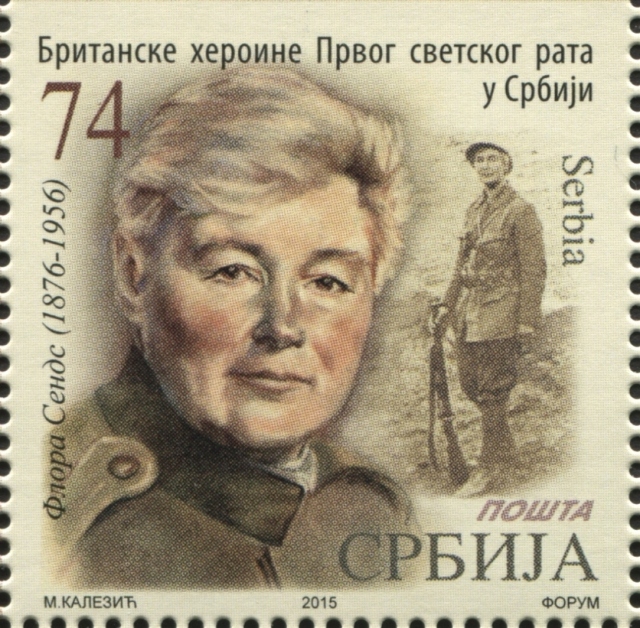 She returned to England in old age, and died at the age of 80 in a Suffolk village. In Britain she is largely unknown. There was a pub named the Flora Sandes in Thornton Heath in South London, but it closed down earlier this year. The building was boarded up and her name removed from over the front door.But in Serbia she remains celebrated. As recently as 2009, the Belgrade authorities named a street after her. In 2015 her face appeared on a special issue of Serbian postage stamps.She died in Bury St Edmunds at the West Suffolk Hospital on 24 November 1956.
If you enjoyed this post there are plenty others like it on my blog which are edited ectracts of my WW1 history book, Lest We Forget.  Lest We Forget is an easy to read guide to WW1 and is only 122 pages long.

I am a writer and traveller with a penchant for history and getting off the beaten track. With several books to my name including a #1 seller, I also write environmental, travel and history articles for magazines as well as freelance work. Recently I've appeared on BBC Radio and Bloomberg TV and am waiting on the filming of a ghost story on British TV. I run my own private UK tours company (Ye Olde England Tours) with small, private and totally customisable guided tours run by myself!
View all posts by Stephen Liddell →
This entry was posted in history, Life, WW1 and tagged First World War, Flora Sandes, Lest We Forget, Serbia, The Great War, Women in WW1, WW1. Bookmark the permalink.

7 Responses to Flora Sandes, the only British woman to fight in WW1