Posted on September 28, 2017 by Stephen Liddell

It’s been 12 years since the last new Star Trek television episode was aired so it is with much excitement that I got my Netflix free month offer underway only to watch Star Trek: Discovery which is no doubt what they hoped for.

It must have been a difficult job to create a new Star Trek series; the requirements to produce satisfying and ‘logical’ drama for the most famously pedantic fans anywhere whilst also attracting some of the fans of the recent Star Trek films which vary in their adherence to Trek canon and tendency to shoot their way to their goal rather than talk it.

The two new episodes of Discovery to all intents and purposes create a pilot or TV movie and as such their main ambition is to raise eyebrows, garner attention and suck people into the new series. As such it is hard to know how close to the series first two episodes ‘The Vulcan For Hello’ and ‘Battle At The Binary Stars’  will be. 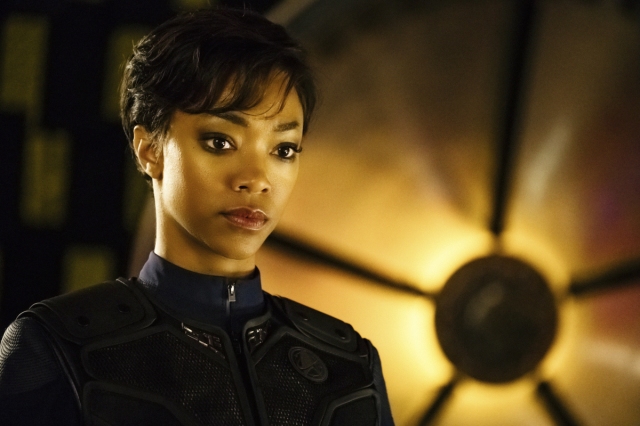 It’s always interesting to see how close the pilot show of each Trek series has actually been to the real show.   Famously The Cage with Captain Christopher Pike didn’t really get off the ground and is quite different in many ways to most of Star Trek.  Where No Man Has Gone Before however is very much just what you’d expect in Star Trek.

TNG’s Encounter At Farpoint definitely shows it changes from the original series and highlights the peaceful philosophy that much of TNG would embrace whilst still being somewhat lackluster compared to the show itself.

The Emissary which started off DS9 is similar in that it showcases what the series will be like and its very obvious differences from the previous Star Treks.  It is thoughtful if a little ponderous but it does a good job of setting up the first few years of the show at least.

I always saw Voyager as the weakest link in Star Trek for many lengthy reasons.  The Caretaker was a big budget affair that set up the premise of Voyager.  Maybe it did so well as I didn’t care too much for it and as I say, whilst I’d rather watch Voyager over most other TV shows, any given episode is generally to be weaker than other Treks though of course there are exceptions.

Finally there was Broken Bow which I thought was a terrific pilot episode, the best since the original Star Trek, maybe better in some ways.  Sadly due to issues with the show runners and the production studios, Enterprise was never quite as true to itself as it should have been until the final season which was excellent but by then it was too late.

The rest of this blog post does contain information and Spoilers for the first two episodes of Star Trek Discovery.

There are many things that are different about Star Trek: Discovery.  For starters the focus is on a single character and this character isn’t even the Captain.  The Walking Dead’s Sonequa Martin-Green acquits herself well as Michael Burnham, a human raised as a Vulcan after what’s hinted to be the death of her family. She’s been the XO on the USS Shenzhou for seven years, and over this time has built up a deep bond with Michelle Yeoh’s Captain Georgiou as the rather clunky dialogue in their first scene indicates.

This can be forgiven, however, as we’re being prepped to see their relationship tested during the stand-off with a Klingon battle fleet that dominates these two episodes. After a century of minimal contact with humans, the redesigned warrior race of Klingons are being whipped into war by the demagogue T’Kuvma, whose message of racial purity and making the Klingon Empire great again.  In fact as I mentioned in the last post how the Federation were always inspired by the USA, in Discovery they have changed this so that it is the Klingons who mirror present day America.

After Burnham accidentally kills a Klingon whilst investigating a destroyed communications satellite, T’Kuvma has his Gulf of Tonkin incident, and Burnham argues that the Shenzhou should take pre-emptive action and end a war before it begins. Captain Georgiou in finest Trek in Trek tradition counsels diplomacy, but in a break from the franchise’s usual ways is shown to be wrong. There’s no negotiating with T’Kuvma, and Burnham eventually resorts to a cack-handed mutiny which fails in getting her fellow crew-members to attack the

There’s just no negotiating with T’Kuvma, and Burnham eventually resorts to a spur of the moment mutiny which fails in getting her fellow crew-members to attack the Klingons, and succeeds in getting her thrown in the brig and so very much the worst of both worlds.

Before you know it, both sides have called in reinforcements, and the shooting begins. It’s all pretty gung-ho stuff for Trek and a little morally ambiguous as the pro-war characters on both sides are the ones that are proven to be correct. It is debates and discussions like these that give fans elements to go through 51 years after the show first aired.

Soon enough, Michael is going someway in redeeming herself by accompanying Georgiou on a suicide mission to capture T’Kuvma on the Klingon ship.  What happens next is something of a shock and a big break with Star Trek tradition. Two of the three main characters in the show are killed, namely Captain Georgiou and T’Kuvma.

I kind of guessed about Captain Georgiou as Michelle Yeoh was billed as a Special Guest Star but it is still something to kill the captain after just 2 episodes especially when she was such a main character.   I was more shocked by the death of Klingon T’Kuvma.  I quickly grew to like him and he had a very noble and strong screen presence as played by British actor Chris Obi.  No doubt as Burnham and Sarek stated earlier, he will now become a martyr to the Klingon people around which they will rally to form a feared Empire. 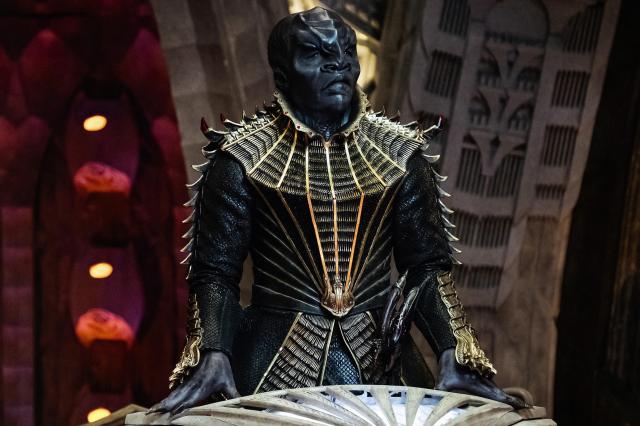 The desperate mission of Burnham and Georgiou ends in death and failure.  The Shenzhou is ultimately destroyed and the faint prospects of peace go out of the air lock.    The episode concludes with Burnham being sentenced to life in prison for her attempted mutiny.

She’ll get out, of course, unless this series is to be radically different to it predecessors – but it’s a final rug pull in a pair of episodes that felt fresher and bolder than any entertainment brand more than five decades old has any right to.

Where Discovery goes from here is slightly hard to fathom but it seems like it will be a season long run-in with the Klingons mixed up with self-contained storylines.

The first two episodes have set up a compelling central character, placed her in a world, and then completely wiped away that world. This is a new, harder-edged Star Trek and there are definite influences from Game of Thrones in terms of its sophistication and production values.

What is also present in the backgrounds but will hopefully come to the fore is more of the idealism and inspiration that Star Trek is famous for and which separates it from almost any other television series out there.   Discovery is certainly influenced by the recent Trek movies but all ready feels a lot more substantial and meaty.

There were lots of Star trek heritage to be seen or heard, everything from Andorians to a Federation ship named T’Plana Hath, the Matron of Vulcan philosophy.  There were also mentions of Stovokor and Kahless, Vulcan education centres and interestingly, Sarek of Vulcan. 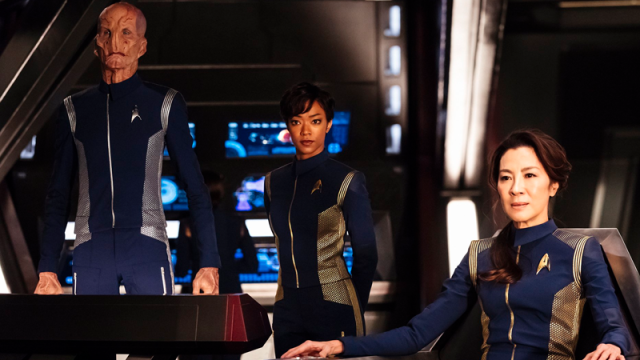 I’m not too enamoured with the dull as dishwater Enterprise blue uniforms or the steely grey bridge of the USS Shenzhou.

What’s interesting that for the first time since Where No Man Has Gone Before, a star Trek show is starting with the characters very familiar with each other and well into their term of service.  I think this is so much better.  I always wonder why they keep doing the same foundation stories for Spiderman or Batman.  We know how they start, by all means have a new actor but lets see them 15 or 20 years on… enough with the whole learning the ropes thing.

I really like the new character Lt. Saru played by Doug Jones.  He comes over as refreshingly alien.  His species are a predated species so he is understandably anxious and almost cowardly.  His makeup is terrific and the actor brings a lot to make everything he does, alien.

I also really liked the new Klingons, an evolution or is that devolution from the Klingons we have seen so far.  The interior of the ship, the makeup and costumes are fantastic.  As was the use of the Klingon language though i think they pushed the limits of how much they could use in any single episode.

The special effects and production values were incredible, beautiful to behold and epic in their majesty. The desert scenes reminded me of being in Wadi Rum in Jordan and then I found out that they were actually filmed in Jordan so hence the beautiful realism.   Interestingly we didn’t really get to meet much of the crew, possibly because the ship gets destroyed and presumably the USS Discovery is unveiled alongside the new captain, played by Jason Isaacs.

I will definitely be watching the next installment.

I am a writer and traveller with a penchant for history and getting off the beaten track. With several books to my name including several #1 sellers. I also write environmental, travel and history articles for magazines as well as freelance work. I run my private tours company with one tour stated by the leading travel website as being with the #1 authentic London Experience. Recently I've appeared on BBC Radio and Bloomberg TV and am waiting on the filming of a ghost story on British TV. I run my own private UK tours company (Ye Olde England Tours) with small, private and totally customisable guided tours run by myself!
View all posts by Stephen Liddell →
This entry was posted in Life, Popular Culture, television and tagged Battle At The Binary Stars, Discovery, Lt Saru, Michael Burnham, Reviews, Sci-Fi, science fiction, Star Trek, Star Trek Discovery, The Vulcan For Hello. Bookmark the permalink.